The Dutroux Affair centres upon the person of Marc Dutroux, convicted of multiple charges of abduction, rape and murder of children. He continued to insist that he was part of a European wide VIPaedophile ring including senior politicians, police officers and businessmen.[1][2]

Marc Dutroux did all of it alone and was not part of any bigger network that served the elite of the country.

Originally Pinon had recorded the story in order to use it against his wife for custody in an on-going divorce. Eight days later, however, Pinon said his home was burglarized. Pinon would also receive a call from an Nivelles police investigator who believed there may have been a connection between Pinon's burglary and the murder of a woman in Waterloo at around the same time.[4] 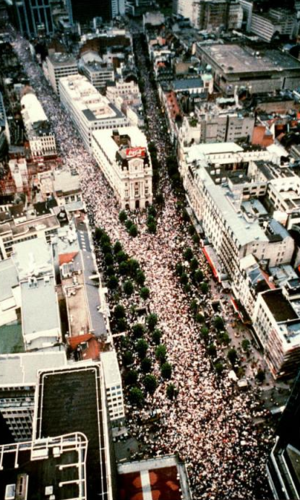 Picture credit AFP - By some estimates up to 400.000 people gathered in Brussels in 1996 to protest the injustice and incompetence that was involved in the case. Significant for a country with around 10 million citizens at the time.[5][6][7]

Judge Jean-Marc Connerotte was dismissed after he attended a fund raising dinner for the victims' families. His replacement, Jacques Langlois had never tried a case before and had a difficult relationship with the public prosecutor Michel Bourle. Some of the parents of the victims claim that no new evidence was brought forth after Langlois took on the case. Langlois claimed that much of the evidence gathered was unverifiable and useless in court.[citation needed]

The dismissal of Connerotte and the end of the investigation resulted in October 1996 in the "White March", with an estimated 300,000 people marching on Brussels to demand a reform of Belgium's police and justice system.[8]

Dutroux escaped from police custody for a few hours in April 1998, but was recaptured after a massive manhunt.

Throughout the trial, Dutroux insisted that he was part of a Europe-wide paedophile ring including police officers, businessmen, doctors, and senior Belgian politicians.[9]

The jury publicly protested the presiding judge Stéphane Goux's handling of the debates and the victims' testimonies.[10]

The police seized several videotapes from Dutroux's house that showed him constructing the secret entrance and the dungeon where he imprisoned girls. The police [When?] reported that they never viewed the tapes because they did not have access to a machine that could play them. Many more failures would add up over time, to a considerable extent caused by the ineptitude of police officer Rene Michaux;[11][12][13][14] while some people question if all failures can be attributed to incompetence.[citation needed]

1995 - A police surveillance camera set up to watch Marc Dutroux was programmed to operate only from 8am-6pm so did not record his kidnapping of An Marchal and Eefje Lambrecks. 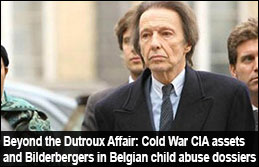 Joël van der Reijden published Beyond The Dutroux Affair on his on his ISGP website[15], which puts the events in a wider context.

Commercially-controlled media has kept a near total silence on the deeper connections and implications of the issue and treats Joël van der Reijden's research as a third rail topic. As of August 2019, Wikipedia had a Mark Dutroux page, but did not have a separate page for the affair.

A high number of people have died suspicious deaths in connection to the affair. The media in Europe reported about these deaths, but on a very limited scale.

In 2019, the Epstein affair exposed Jeffrey Epstein to be at the centre of a VIPaedophile entrapment project. Although larger and more blatant, the case has marked parallels with the Dutroux Affair:- pattern of light sentencing, multiple failures to investigate and other deviation from standard operating procedure by public officials.