Document:Remembrance Day and the truths that dare not speak their name 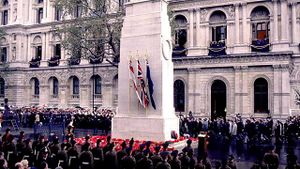 War crimes remembered at the Cenotaph

The ritual of tribute to fallen soldiers is a tradition that stretches back to antiquity. From then to the present the exaltation of those who have died fighting in a tribe, city state or nation’s wars has been crucial in uniting said community around a common narrative of shared purpose and values.

In Britain we have the annual commemoration of Remembrance Day, observed each year on the closest Sunday to 11 November, the anniversary of Armistice Day bringing the First World War to an end in 1918 after four bloody years of slaughter in the mud swamped trenches of the Western Front.

Young and old, rich and poor, the message embraced on Remembrance Day is that regardless of our differences we are joined by a common nationality, heritage and history, and that those who died fighting in the nation’s wars did so in the interests of all of us and as such are worthy of unyielding esteem, admiration, gratitude and honour.

There is however an insidious and pernicious aspect to this annual ritual, one that has come to embrace a set of ironclad received truths that brook no questioning, dissent or disagreement. It is that at bottom the trumpets, monuments and fanfare are not designed to mourn the nation’s war dead but instead to glorify the nature of their deaths and, by extension, extol the virtues of militarism and the nation’s martial might; both of which in the context of the British State are inextricably linked to the brutal legacy of empire and colonialism on the part of its ruling class.

This is even more relevant when we consider Britain’s participation in the recent wars in Afghanistan, Iraq and Libya — wars in which countless thousands of civilians were killed and maimed, and for whom there is no monument or ritual of remembrance. And this is not forgetting the myriad other colonial wars the country has waged in the history of an empire that in truth should be a source of shame rather than celebration.

Moreover in 2018, invited again as we are to embrace Britain’s role in the world as a force for good on Remembrance Day, the people of Yemen are being systematically slaughtered, starved and made vulnerable to disease in a war unleashed upon them by the murderous medieval tyranny of Saudi Arabia with the active involvement of British military expertise and resources.

Meanwhile at home, as the usual array of politicians, members of the royal family and various other dignitaries step forward to lay wreaths at the Cenotaph, consider that 13,000 former soldiers are currently homeless, cast aside like so much flotsam; their lives reduced to a daily struggle with mental health issues resulting from their active service, compounded by the living hell of Tory austerity. Their grim plight forces us to confront a withering reality — namely that of a political establishment which consistently demonstrates little desire to offer those who serve in the nation’s ignoble military adventures more than an existence of poverty, alienation and despair afterwards.

Given, too, that the apotheosis of militarism this annual ritual engenders acts as a de facto recruiting sergeant, encouraging succeeding generations of young working class men, starved of opportunity and prospects at home, to join up and likewise be sacrificed on the altar of national prestige and degeneracy, the entire enterprise constitutes a cycle of unyielding false consciousness.

It behoves us also to resist the attempt to elide Britain’s eminently dishonourable role in the world, a source of unrelenting suffering, chaos and carnage throughout a Global South forced to pay the price in blood for the litany of grand statues and monuments to the nation’s countless wars and military heroes. When it comes to the one war in Britain’s post-WW1 history that was morally justified in being waged, the Second World War against fascism, inconvenient historical truths abound. Among the more salient of those is that were it not for the savage peace terms imposed on Germany in the wake of the First World War, enshrined in the Treaty of Versailles, Hitler’s rise on the back of the consequent deep felt sense of grievance and national humiliation unleashed in Germany would have been far less likely to have taken place — if at all.

The subsequent years of appeasement on the part of the nation’s ruling class, driven in part by the latent sympathy for the Nazis that existed among a significant section of its number, must also be weighed on the scales of hypocrisy in this regard. For were it not for this craven appeasement the fascist dictator would likely have been stopped at a far earlier stage in his ambitions.

Remembrance Day reminds us that we are a nation and a society suffering from an addiction to war. Breaking this addiction requires that we first undergo a sea change in our attitude to war and how we view those who’ve died in them. The liberal bandying around of words such as ‘sacrifice’ and ‘heroism’ at this time of year, usually by well fed, privileged politicians and commentators, reveals an atrocious lack of understanding of the terror the young men hurled into places such as Afghanistan and Iraq to kill and be killed experience.

No amount of training could ever prepare them for the horrors of war, the sight of their mates being blown apart beside them, of women and children slaughtered; and no amount of bugles and parades could ever compensate those who return maimed and/or psychologically damaged, whereupon they are left to the mercy of charity.

If Remembrance Day imparts a message worthy of our collective intelligence it is that war should be made a crime, with those who instigate it punished as criminals. In the last analysis it does not determine who is right only who is left.

We have met the enemy and he is us.