Remembrance Sunday is the closest Sunday to 11 November, which was the day that a final armistice was agreed between the belligerents of World War 1.

Remembrance Day services are held each year throughout the UK on 11 November, with the main national service held on a Sunday at the Cenotaph in Whitehall, London.[1]

Armistice Day is also commemorated every year on 11 November to mark the agreement signed between the Allies of World War I and Germany at Compiègne, France, for the cessation of hostilities on the Western Front, which took effect at eleven o'clock in the morning - the "eleventh hour of the eleventh day of the eleventh month" of 1918.

The armistice initially expired after a period of 36 days. A formal peace agreement was only reached when the Treaty of Versailles was signed the following year on 28 June 1919.[2] 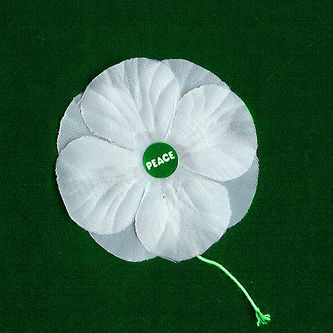 On Sunday 11 November 2018, it will be 100 years to the day since the end of the First World War, which failed in its promise to be "the war to end all war"; since 1918, at least 67 million people have died in war. The Peace Pledge Union, along with other peace and human rights groups - local, national and international - will hold events on and around Remembrance Sunday in remembrance of all victims of war, and to commit to working for peace.[3]

White poppies represent remembrance for all victims of war of all nationalities, a commitment to peace and a rejection of militarism. Sales of white poppies in 2018 are higher than in any previous year since white poppies were founded in 1933. White poppy wreaths will be laid at an alternative Remembrance Sunday ceremony at Tavistock Square in London by each of the organisations involved.[4]