"Every War is a Rothschild War"[1]

★ Start a Discussion about this document
Never Again

Never in my fairly long life have I been exposed to such a global scam as the way in which the virus SARS-COV-2 has been used to create public panic and distrust in the world. Humans are naturally gregarious animals yet in practically every country on the planet they have been instructed to disobey their friendly and communal instincts in favour of “social-distancing”. Stay two metres apart has been the general message.

Nobody knows exactly how viruses are spread or exactly how people become infected. Nevertheless, there has been a universal message – almost a demand – to keep well removed from our neighbours and other people outside of our immediate families. Two metres was the original instruction, a measure which caused lengthy queues at food markets and elsewhere, brought industry to its knees and sent shivers through the stock markets. More recently this distance has been reduced to one metre in some countries and that may well become, “the new norm” in the UK from 4 July 2020. That suddenly the distance can be halved demonstrates that the gurus who put out these messages have absolutely no idea what distance is a safe distance, if any.

For three months the message from mainstream media was repetitive and preclusive of any other argument. Only recently has there been any questioning and then precious little – outside of social media articles which have been quick to query what has happened. Since it became quite clear that SARS-COV-2 was simply another virus – not dissimilar from AIDS, Ebola, influenza, the common cold or shingles – and like those viruses would ultimately run its course without wiping out the entire population, there has been a mellowing of the perpetual indoctrination which was tedious.

Thanks to thinking people, who have suffered much abuse by questioning the narrative, even its perpetrators can now see that the plan has not worked. The way the corporate media have presented a panic which they themselves created has been anything but balanced. What’s more that presentation took the form of a series of imperatives penetrating our eardrums and brains with instructions accompanied by “you must”. Visually this has been further endorsed by newsreaders sitting well apart from one another, most of the time looking awkward and ungainly.

This raises many questions. Who has the power to control the global media and governments? Who can get practically every country to sing the same song with the same orchestral backing, while its real entertainers and theatrical productions are sidelined? Who can bring all sporting events played by and within nations to a standstill? Why would they want to do this?

Most people, at least for a month or two, have been happy to comply with “the new norm” created for them by entities outside of their personal networks. Out of these dedicated followers of mainstream opinion there are those who tell anyone who prefers to question the narrative that it would not be possible to get all the countries and their governments to go along with a hoax. Is that true?

On the face of things it does seem doubtful that all countries would comply. Who could possibly get the people portrayed as ideological enemies of the west, like Xi Jinping and Vladimir Putin, to adopt this global plan? Originally Russia presented very few coronavirus infection figures with no deaths making it look like closing its borders had worked. Suddenly those figures changed quite dramatically and Russia became one of the worst hit countries, unlike its neighbour, Belarus (more of which later).

In this honest self appraisal lies all the wisdom necessary to see what has happened recently with the coronavirus panic-demic. He who pays the piper calls the tune. And that answers one of the big questions raised. The panic caused by a virus, less deadly by far than HIV/AIDS, was yet another attempt by the elite to gain total control of the planet. The only real difference is that this most recent imperialistic excursion into all countries simultaneously was attempted without resorting to war, which on the face of it seems less cruel.

In the early 21st century a Rockefeller descendant, Nathan Rockefeller, told Aaron Russo what the elite families’ blueprint was for controlling and enslaving ordinary people and changing the world forever. Film producer, Russo, who died of bladder cancer in 2007, was not happy with what he heard and decided to go public. In an interview with Alex Jones he talked about how 9/11 had been planned to create a new enemy out of Islamic nations, how feminism had been introduced to create a rift between man and woman together with other control mechanisms the elite were using, and had planned, for global supremacy through dividing and conquering. Nathan Rockefeller told Russo how the world’s public, that’s you and me, would be micro-chipped to monitor our spending preferences and financial transactions and to make sure we did not step out of line – in other words modern slavery. This two minute extract should be enough to scare the pants off any thinking person.[2]

The death figures presented deliberately to create panic are not as scary as the way they are presented. As well as the argument whether a person has died “from” coronavirus or “with” coronavirus, global death-rates are pretty much on a par with other years and any excess of deaths may well be accounted for by lack of medical care for those on waiting-lists due to the extra resources ploughed into treating COVID-19 cases. The eventual figures will bring the truth to light.

Country to country comparisons have been used to question why a neighbouring country might not have been affected as badly as one’s own. All kinds of speculation go into the causes for this anomaly. Of the Scandinavian countries Sweden has been exemplified and pilloried as the way not to go. There was no lockdown in Sweden and the pundits who support the “panic pandemonium” have seized on this to highlight Sweden’s death rates in comparison with Norway and Denmark, countries which have had fewer deaths per capita. So is Sweden experiencing a worse than average death-rate? No.

A study from 1990 to 2020 compiled by HaraldofW from SCB (Statistics Sweden, a government agency) shows that death rates from all causes for the months January to April are up on 2019 but down on 2018 and in fact only higher than three other years in that 30 year period. 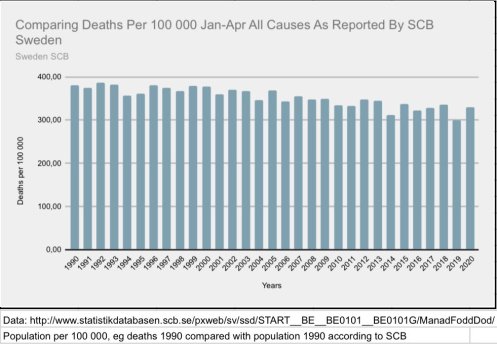 Belarus is a country which also abjured lockdown measures. It has played all its football matches in three divisions, with normal crowd attendance, and has already started its cup run. Life goes on as usual there. Social interaction has not been curbed and infections from the virus have been high. Deaths however have been very low. There is a lot to be said about the importance of getting out into the fresh air to fight any virus and being cooped up in a claustrophobic environment with the demand to “stay home” and breathe in your own carbon dioxide is an unhealthy message.

While mainstream media have put the wind up everybody there is absolutely nothing more to worry about than there is from the annual influenza toll, less in fact. For some unaccountable reason this virus took on a guise of being some kind of super-killer that could fly around like a caped crusader. That was a big lie. This graph shows the biggest daily killers and Covid-19 is way down the list. 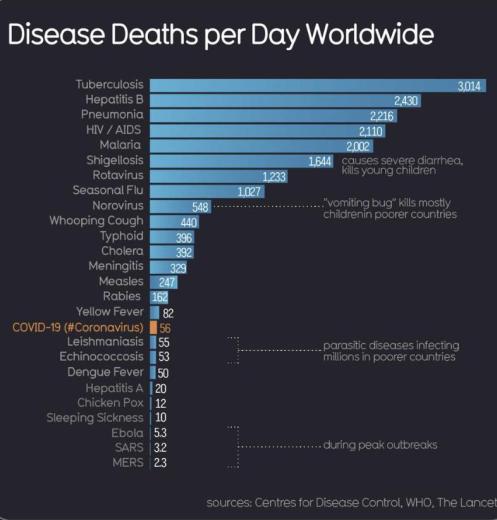 Since you are nearly five times more likely to die of measles why have we not had lockdowns to protect us from measles and those with it? Since you are nearly 40 times more likely to die of HIV/AIDS why have we not got social distancing measures over that? Whatever the cause of death it is distressing for families and loved ones at a time when we ought to be giving one another a friendly hug.

For the control reasons outlined above it is imperative that the world wakes up to what is happening and the nonsense that SARS-COV-2 has become for us all. Being brainwashed by a media and governments that are under the control of big bankers has virtually ruined economies of the world and recovering from it will take some time.

This virus has been turned into a monster it should never have become. Accompanying terminology that has grown exponentially with it includes phrases like “the new norm”, “normality will never be the same” together with a whole load of military clichés including “lockdown”. Well thankfully the war is nearly over. While not being a “war to end all wars” it has been a war where all the ammunition and war propaganda has come from one side. The most important lesson we can all learn from this enemy within is to realise we have been had, and next time to say: “Never Again”.