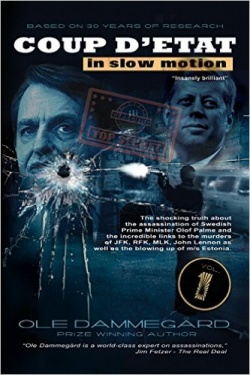 Wikispooks Comment This is an impressive piece of research on a massively influential event in the politics and geo-political independence of Sweden. As with similar events - most notably the assassination of US President John F Kennedy - the settled Official Narrative of murder by a 'lone-nut' gunman simply does not stand up to elementary scrutiny. As always in matters of high crimes, the question "cui bono?" provides the most fruitful lines of inquiry. In this respect one of the most telling overall observations on the effects of the assassination must surely be: "After Palme there were no Swedish global politics" (see below). The country was rapidly absorbed into the US/UK/NATO matrix of globalised power projection and any thoughts of a genuinely independent Swedish voice was no more.

★ Join the Discussion about this document
Coup d'Etat in Slow Motion

On the night of February 28, 1986, I headed the police patrol first at the site of the murder of our prime minister and thereby found myself in the middle of one of the largest political and legal scandals of the 20th century in Sweden. Ever since then I have gradually come to the conclusion that the responsible authorities have primarily tried to cover up the event. I have read many books, official documents, newspaper articles, etc, and have also spent thousands of hours both alone and together with serious private persons trying to find the truth about this murder. Among the more interesting books I would like to mention ”Coup d’etat in Slowmotion”. What has been most interesting to me is the fascinating story, the extensive research and also the information concerning global Free Masonic networks. Therefore I give this book my very best recommendations to all those who are interested in the murder of Olof Palme and the reasons behind it.

In 1986, something very tragic happened in Sweden. Prime Minister Olof Palme was brutally assassinated on a street in central Stockholm. This was something that nobody had ever considered possible, and the Swedish people was paralysed by grief.

“600 years ago, a church had been erected on the corner of Tunnelgatan – Sveavägen, and we had been given a new saint, Saint Olof”, explained Hampus Lyttkens, retired professor of religious philosophy in Lund. “This is exactly how saints were created in earlier times, a hero who became a martyr and was endowed with mythical dimensions.”

After some years of futile chasing in all directions, the leaders of the manhunt agreed that the murder was most probably an act of lunacy carried out by a “lone looney”. The name of the person pointed out, accused, sentenced and later even acquitted was Christer Pettersson (who died under violent circumstances and who can no longer defend himself). He is still today (spring 2013) the one who is guilty, in both the eyes of the leaders of the manhunt and most of the media. But is the solution really that simple?

The assassination shook the entire world and overnight Sweden changed face from an idyllic small nation without corruption and violence to become part of the tough and ruthless world around it. Even politics changed course.

“Without Palme, Sweden became a more normal country, that is to say that later governments did not strive to change the rest of the world”, stated Richard Burt, former assistant foreign minister of the United States in the TV programme Dokument Utifrån. “Instead, the Swedish governments started doing as other governments, focusing on questions concerning the local area. After Palme there were no Swedish global politics.”

The shots on Sveavägen simultaneously shook the electorate. After a decline in February, the social democrats experienced an increase of six per cent during the month following the assassination. That sympathy for the party is an international pattern which could also be seen after John F. Kennedy was shot to death in Dallas as well as after the attempted murders on President Reagan and Prime Minister Margaret Thatcher. Even changes in domestic politics took place, such as a more positive attitude on the labour market towards the employers, the abolition of wage-earners’ funds, reduced taxes for high-income earners, advertisement sponsored television, the disintegration of the welfare state, the increasing gap between the rich and the poor as well as the connections with the EU – none of this would have happened during the reign of Palme.