But, because a UK General Election was called for 8 June 2017, it has been decided that the Gorton by-election should be cancelled.[4] 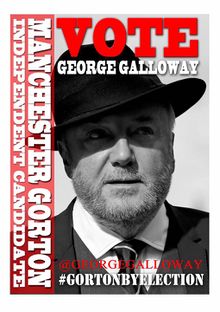 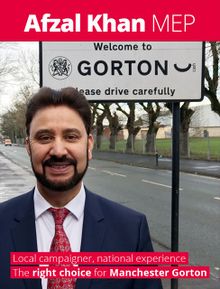 On 21 March 2017, former Respect MP George Galloway confirmed he would stand in the Manchester Gorton by-election, saying the “all-Asian shortlist” selected by Labour was the latest in a long line of insults delivered by mainstream parties to local communities.[8] On 23 March 2017, Afzal Khan – a solicitor, self-declared “lifelong socialist” and MEP for the north-west of England since 2014 – was selected as the Labour Party candidate in a vote by 551 Gorton CLP members narrowly beating local Councillor Yasmine Dar, who had the backing of Momentum. Khan must now defend Kaufman’s 24,079 majority against an attempt by George Galloway to return to parliament, as well as representatives from all the major parties.[9] In April, one commentator was seriously contemplating a Galloway victory in Gorton.[10]

The seat has been held, with various boundary alterations, by Labour since the 1935 General Election,[11] and by Gerald Kaufman from 1983 until his death. The Green Party came second in the 2015 General Election, whilst the Liberal Democrats came second in every general election before that since 1997. Labour hold every council seat in the constituency.[12]

From the Fifth Periodic Review of Westminster constituencies the seat incorporates the electoral wards (since the 2010 General Election) of:

In the EU Referendum, it was statistically estimated that the constituency voted in favour of remaining in the EU. However as Gorton was only part of the Manchester counting area, the exact result is unknown. Yet, through demographic modelling, the Remain share in the constituency has been estimated to be 62% by Chris Hanretty of the University of East Anglia,[14] and 61% by Number Cruncher Politics.

The local Constituency Labour Party (CLP) has been under special measures since 2004, so candidate selection will be run by the National Executive Committee. The Manchester Evening News reported that a debate has been taking place for many years within the Gorton CLP over who would succeed Kaufman, and that the party is experiencing severe internal conflict as a result, with many local figures said to be considering putting themselves forward.

If there is any challenge to Labour in Gorton, it won't come from UKIP or the Tories. Rather, this is a relatively rare constituency defined by the battle on the centre-left, between Labour and the Lib Dems. It will be an interesting testing ground for the Lib Dems and their comeback since the referendum. They used to enjoy great success at local council level and got within 7,000 of Kaufman - who must have banked a large personal vote - in 2010, before falling right back in the massive Lib-Lab swing of 2015. Nick Clegg's infamous betrayal on tuition fees certainly played a part. As a result, Labour got a massive 67% of the vote, with the Greens taking second on just 10%.

Much of those swings involved the university vote - either students or staff - and they will be key players in this by-election story as 27% of the population are in full-time education. This segment of liberal-left opinion has swung between both parties in recent decades and are precisely the type backing the Lib Dems' full-throated opposition to Brexit.

In order to seriously challenge Labour, the Lib Dems will need to maximise these votes and hope for a very low turnout. It is a huge ask. This is a very deprived constituency that has suffered during the austerity years, earning the Lib Dems plenty of enemies. They look booked for clear second place, but anything over 30% would be an achievement and they'll need at least 40% to win.[15] 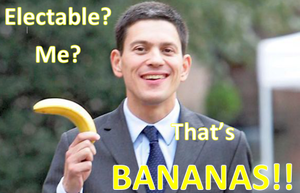 Milibananas preparing to be parachuted in?

On 2 March 2017, the SKWAWKBOX reported that Blairites in the Labour Party were plotting to have David Miliband parachuted in as Labour candidate in the 2017 Manchester Gorton by-election:

Gerald Kaufman died after a months-long illness and is likely to have known the prognosis. As the BBC reported in July last year, he was widely expected to step down in any case – and the Labour party suspended his CLP (constituency Labour party):

An entire Constituency Labour Party group (CLP) has been suspended following allegations of infighting, bullying and voting irregularities. It is understood complaints centre around issues within Manchester Gorton CLP following a meeting on 2 July. They are believed to be prompted by the possibility of Sir Gerald Kaufman's seat becoming free if he stands down at the next election. A party spokesman said the CLP cannot hold meetings while an inquiry is held. A North West Labour spokesperson said: "Any complaints of bullying or intimidation and allegations of misconduct are always taken very seriously by the Labour Party."[16]

It’s not clear whether Labour’s national or regional HQ knew at this point about the likely outcome of Mr Kaufman’s illness, but even the BBC recognised at the time that the issue of his successor was at the heart of the issue. Now it’s looking like the right wing of the party was playing the same unprincipled trick that they did with Wallasey, Brighton and Hove, and Clacton – confecting spurious allegations to ensure that local members were deprived of a say on the MP who represents them. The suspension of the CLP was eventually lifted in November last year – at which point Labour must have known Gerald Kaufman’s prognosis – but only with Labour’s Regional Office retaining tight control of meetings and processes.

The suspension of Manchester Gorton CLP has been lifted subject to recommendations from the National Executive Committee's Disputes Panel. These recommendations are intended to set the constituency on the strongest possible footing moving forward, providing a safe space for all members to participate in our growing movement and ensuring the constituency remains a strong campaigning force.

The final italicised point is crucial, as it means that Labour’s north-west HQ will have full control of the selection of Kaufman’s successor.

And it looks like arch-Blairite David Miliband will be the beneficiary. Rumours are circulating in abundance that Miliband – the darling of the anti-Corbyn faction in the Labour Party – is set to be the candidate in the forthcoming by-election:

"Hi @DMiliband there's a rumour that you are standing in Manchester Gorton. Is it true?"[17]

It’s not clear whether the right-wingers’ plan back in November was already aiming to lever Miliband in as the candidate for Gorton, most of whose members would certainly not wish for him, but it would be unsurprising – and disgustingly cynical. At the very least, it’s an opportunist exploitation of an already-undemocratic but entirely typical Blairite tactic.

And one that needs to be prevented before it becomes a fait accompli.

Labour’s ‘right-whingers’ think the Blair-tainted, deeply uninspiring David Miliband would be a viable replacement for Jeremy Corbyn as party leader, but for that ‘dream’ (nightmare) to become a reality requires Miliband to be an MP. We have far too many right-wing Establishment drones in the Labour Party already.

The red-Tory factions think ‘Mr Bean’, who left the party in a sulk after losing the leadership election to his brother to take a hugely-paid job in New York, would appeal to voters disillusioned with ‘more of the same’.

That tells you all you need to know about the delusions of Progress, Labour First and the other faux-Labour groups that are relentlessly trying to bring down Corbyn.

And any right-thinking Labour member or supporter needs to make such a stink about Miliband’s candidacy that it is stifled before it begins.[18]

This page imported content from Wikipedia on 4 March 2017.
Wikipedia is not affiliated with Wikispooks.   Original page source here
Retrieved from "https://wikispooks.com/w/index.php?title=2017_Manchester_Gorton_by-election&oldid=112047"
Categories: