U.S. Police have spent millions on mass surveillance tools for cellphones, but as of 2017 there were still few rules about what happens to the information they capture.[1] 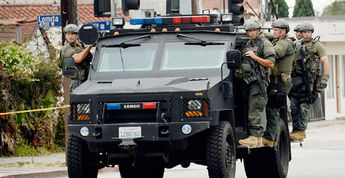 An invention of the LAPD, SWAT teams are increasingly used by US police, mostly to raid private homes as part of the "war on drugs".