Arlene Foster MLA, PC (born 3 July 1970) is a Northern Irish politician who has been the leader of the Democratic Unionist Party (DUP) since December 2015 and the Member of the Northern Ireland Assembly for Fermanagh and South Tyrone since 2003.

McGuinness resigned as deputy First Minister in January 2017 amid the Renewable Heat Incentive scandal, which involved a green energy scheme that Foster set up during her time as Minister for Enterprise and Investment. The scheme was set to cost the taxpayer £490 million and there were allegations of corruption surrounding the scheme. McGuinness asked Foster to step aside as First Minister while her involvement in the scheme was investigated, but she refused to step aside or resign and claimed that the voices calling for her resignation were those of misogynists and male chauvinists.[1] Under the terms of the Good Friday Agreement, the First and deputy First Ministers are equal and, therefore, Foster could not remain in her post as First Minister. McGuinness's resignation caused a Northern Ireland Assembly election to be held.[2]

Following the UK/2017 General Election, Theresa May sought the support of Arlene Foster's 10 DUP MPs to obtain a majority in Parliament.[3] 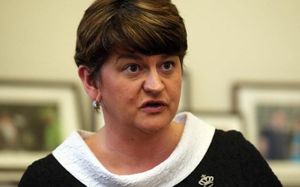