The Yellow vests movement (in French:Mouvement des gilets jaunes) is a grassroots political and economic justice movement in France. It started in 2018 and in 2019 was subject to increasingly violent repression by the French state authorities.[1][2][3]

After an online petition posted in May had attracted nearly a million signatures, mass demonstrations began on 17 November. The movement was initially motivated by rising fuel prices and a high cost of living; it claims that a disproportionate burden of the government's tax reforms were falling on the working and middle classes, especially in rural areas. The protesters have called for lower fuel taxes, a reintroduction of the solidarity tax on wealth, a minimum-wage increase, the implementation of Citizens' initiative referendums, among other things. On 29 November 2018, a list of 42 demands was made public and went viral on social media, becoming de facto a structuring basis for the movement, covering a wide range of eclectic topics, mostly related to democracy, social and fiscal justice.[4] 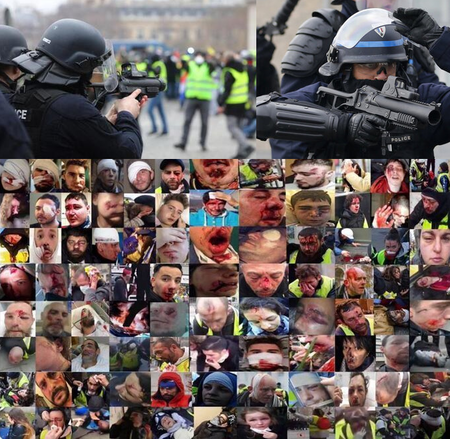 At the end of 2019 315 protestors had been injured in the head due to the police force using the LBD 40 launcher and aiming deliberately too high in some cases,[citation needed] while other accounts blame insufficient training.[5] Some people were left with fractured skulls, 25 lost an eye, five lost a hand and one woman died of injuries caused by a grenade.[6]

Hedi Martin, an organiser, was sentenced to six months' imprisonment after publishing an event on Facebook.[7]

In March 2019, Bruno Leray explicitly allowed the French police "open fire" if they deemed that lives were threatened by Yellow Vest.[20]