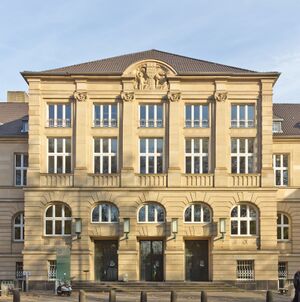 First building of the new university

In 1798, the university was abolished by the French, who had invaded Cologne in 1794, because under the new French constitution, many universities were abolished all over France. The last rector Ferdinand Franz Wallraf was able to preserve the university's Great Seal, now once more in use.

In 1919, the Prussian government endorsed a decision by the Cologne City Council to re-establish the university. This was considered to be a replacement for the loss of the University of Strasbourg on the west bank of the Rhine, which contemporaneously reverted to France with the rest of Alsace. On 29 May 1919, the Cologne Mayor Konrad Adenauer signed the charter of the modern university.

At that point, the new university was located in Neustadt-Süd, but relocated to its current campus in Lindenthal on 2 November 1934. The old premises are now being used for the Cologne University of Applied Sciences.

The University is a leader in the area of economics and is regularly placed in top positions for law and business, both for national and international rankings.