The University of Bologna (Alma mater studiorum - Università di Bologna, UNIBO) is a research university in Bologna, Italy. Founded in 1088 by an organised guild of students (hence studiorum), it is the oldest university in the world.[1][2][3][4]

It is one of the most prestigious Italian universities, commonly ranking in the first places of national, European and international rankings both as a whole and for individual subjects.[5][6] Since its foundation, the University of Bologna, has attracted numerous scholars, intellectuals and students from all over Italy and the world, establishing itself as one of the main international centers of learning.[7]

It was the first place of study to use the term universitas for the corporations of students and masters, which came to define the institution (especially its famous law school) located in Bologna. The university's emblem carries the motto Alma mater studiorum ("Nourishing mother of studies") and the date A.D. 1088, and it has about 86,500 students in its 11 schools.[8] It has campuses in Cesena, Forlì, Ravenna and Rimini and a branch center abroad in Buenos Aires, Argentina.[9] It also has a school of excellence named Collegio Superiore di Bologna. An associate publisher of the University of Bologna is the Bononia University Press. 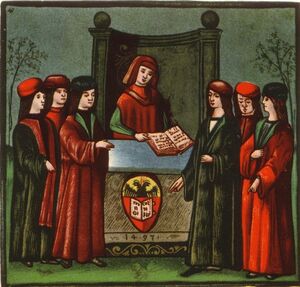 The entry of some students in the Natio Germanica Bononiae, the nation of German students at Bologna; miniature of 1497.

The date of the University of Bologna's founding is uncertain, but believed by most accounts to have been 1088.[10] The university was granted a charter (Authentica habita) by Holy Roman Emperor Frederick I Barbarossa in 1158, but in the 19th century, a committee of historians led by Giosuè Carducci traced the founding of the University back to 1088, which would make it the oldest continuously-operating university in the world.[11][12][13] However, the development of the institution at Bologna into a university was a gradual process. Paul Grendler writes that “it is not likely that enough instruction and organization existed to merit the term university before the 1150s, and it might not have happened before the 1180s.”[14]

The university arose around mutual aid societies (known as universitates scholarium) of foreign students called "nations" (as they were grouped by nationality) for protection against city laws which imposed collective punishment on foreigners for the crimes and debts of their countrymen. These students then hired scholars from the city's pre-existing lay and ecclesiastical schools to teach them subjects such as liberal arts, notarial law, theology, and ars dictaminis (scrivenery).[15] The lectures were given in informal schools called scholae. In time the various universitates scholarium decided to form a larger association, or Studium—thus, the university. The Studium grew to have a strong position of collective bargaining with the city, since by then it derived significant revenue through visiting foreign students, who would depart if they were not well treated. The foreign students in Bologna received greater rights, and collective punishment was ended. There was also collective bargaining with the scholars who served as professors at the university. By the initiation or threat of a student strike, the students could enforce their demands as to the content of courses and the pay professors would receive. University professors were hired, fired, and had their pay determined by an elected council of two representatives from every student "nation" which governed the institution, with the most important decisions requiring a majority vote from all the students to ratify. The professors could also be fined if they failed to finish classes on time, or complete course material by the end of the semester. A student committee, the "Denouncers of Professors", kept tabs on them and reported any misbehavior. Professors themselves were not powerless, however, forming collegia doctorum (professors’ committees) in each faculty, and securing the rights to set examination fees and degree requirements. Eventually, the city ended this arrangement, paying professors from tax revenues and making it a chartered public university.[16] 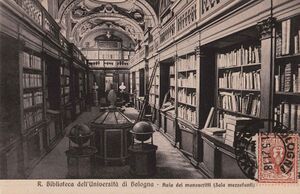 The university is historically notable for its teaching of canon and civil law;[17] indeed, it was set up in large part with the aim of studying the Digest,[18] a central text in Roman law, which had been rediscovered in Italy in 1070, and the university was central in the development of medieval Roman law.[19] Until modern times, the only degree granted at that university was the doctorate.

In 1477, when Pope Sixtus IV issued a papal bull, authorizing the creation of Uppsala University in Sweden, the bull specified that the new university would have the same freedoms and privileges as the University of Bologna - a highly desirable situation for the Swedish scholars. This included the right of Uppsala to establish the four traditional faculties of theology, law (Canon Law and Roman law), medicine, and philosophy, and to award the bachelor's, master's, licentiate, and doctoral degrees.

Laura Bassi was born into a prosperous family of Bologna and was privately educated from the age of five.[22] Bassi's education and intellect was noticed by Prospero Lorenzini Lambertini, who became the Archbishop of Bologna in 1731 (later Pope Benedict XIV). Lambertini became the official patron of Bassi. He arranged for a public debate between Bassi and four professors from the University of Bologna on 17 April 1732.[23] In 1732, Bassi, aged twenty, publicly defended her forty-nine theses on Philosophica Studia[24] at the Sala degli Anziani of the Palazzo Pubblico. The University of Bologna awarded her a doctorate degree on 12 May.[25] She became the first woman to receive a doctorate in science, and the second woman in the world to earn a philosophy doctorate after Elena Cornaro Piscopia in 1678, fifty-four years prior. She was by then popularly known as Bolognese Minerva.[26][22] On 29 October 1732, the Senate and the University of Bologna granted Bassi's candidature and was appointed professor of natural philosophy in December and taught physics.[27][28] She became the first salaried woman lecturer in the world,[29] thus beginning her academic career. She was also the first woman member of any scientific establishment, when she was elected to the Academy of Sciences of the Institute of Bologna in 1732.[30][31] Bassi became the most important populariser of Newtonian mechanics in Italy.[32]