Timothy Simon Spicer OBE followed his ­father into the ­British Army, joining the Scots Guards after passing out from Sandhurst, but failed selection to the SAS. In 1982 his unit was sent to the ­Falklands War where it distinguished itself at the Battle of Mount Longdon. During a tour of duty in Northern Ireland in 1992, Lt-Col Tim Spicer was in command of two men accused of shooting a civilian in the back. Both soldiers were jailed despite Spicer's evidence that they believed they were in peril. They were later freed. Tim Spicer, whose autobiography An ­Unorthodox Soldier was published in 1999, was awarded an OBE for operational service in the province and also saw active service in the Gulf War.

He left the Army in 1994 and founded Sandline International, a controversial ­private military company (PMC) at the heart of a political scandal which ultimately brought down the government in Papua New Guinea.[1]

Tim Spicer also masterminded military ­operations aimed at supporting the government of Sierra Leone including importing weapons in apparent violation of a United Nations arms embargo, which he denied.[2]

In 2002, Tim Spicer established the PMC Aegis Defence Services in London, which has been involved in intelligence, security and reconstruction work in Iraq. Spicer was Chief Executive Officer of Aegis until 2010, when he was replaced by Major-General Graham Binns.[3]

Tim Spicer split from his second wife Caroline in 1998 after five years of marriage.[4]

18-year-old Peter McBride was murdered in Belfast on 4 September 1992 by Mark Wright and James Fisher, members of a Scots Guards battalion commanded by Tim Spicer. The unarmed father of two was shot dead minutes after being stopped and searched by a British Army patrol.[5]

Local police were not able to speak to the two soldiers until some hours after the shooting. In the meantime, the men were interviewed by Spicer along with three other officers. Spicer later wrote "I thought between us we could reach a balanced judgement on what happened." The delay gave rise to allegations that the Army was helping the men to prepare a defence.

Lt Col Spicer has since maintained the same version of events as Wright and Fisher, that the two soldiers believed McBride was about to throw a coffee jar bomb contained in a plastic bag he was carrying. This in spite of the fact that McBride had been searched moments earlier by members of the same patrol. The bag was subsequently found to contain a t-shirt.

At the subsequent trial, the judge said:

"I am satisfied beyond reasonable doubt that there was no reasonable possibility that Guardsman Fisher held or may have held an honest belief that the deceased carried or may have carried a coffee jar bomb".

Wright and Fisher were convicted of murder and sentenced to life imprisonment. An appeal was dismissed in 1995, and the pair were denied leave to appeal to the House of Lords a year later.[6]

Spicer was involved in a lobbying campaign which contributed to the British Government's decision to free Wright and Fisher in 1998.[7] The pair were subsequently allowed to return to their unit, and fought in the Iraq War.[8] Their murder conviction has never been overturned.[9]

In January 1997, the Government of Papua New Guinea (PNG) hired Sandline International, a mercenary firm run by Tim Spicer, to put down a secessionist movement on the copper-rich island of Bougainville. The Sandline plan, Operation Contravene, envisaged the use of two Soviet-made Mi-24 attack helicopters and two Mi-17assault helicopters as part of a strike force to retake the island in a massive escalation of the conflict.

Many of the troops brought to PNG turned out to be employees of Executive Outcomes, a South African mercenary firm founded by veterans of the Apartheid-era army. A mining firm linked to Executive Outcomes was reportedly represented at the initial meeting between Sandline and the PNG Government.

The Sandline contract was never approved by the PNG Parliament, and military opposition to the deal provoked a political crisis. Following the resignation of the Prime Minister, Spicer was briefly detained for illiegal possession of a firearm and illegal importation of cash. After the departure of Sandline, a peaceful political solution to the Bougainville situation was achieved. Although Sandline never carried out its mission, it nevertheless succeeded in suing the new PNG Government for full payment on its contract.[10] 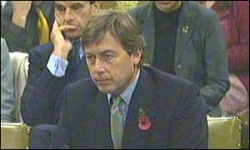 Tim Spicer at the Foreign Affairs Committee hearings, November 1998: "I believed what we were doing was within the law"

In 1998, Sandline imported 100 tons of weapons into Sierra Leone in violation of a UN arms embargo. Spicer's company had been hired by ousted President Ahmed Tejan Kabbah to return him to power. It later emerged that the deal was to be financed by Rakesh Saxena, a financier facing extradition from Canada to Thailand on fraud charges. In return, Saxena hoped to gain diamond concessions in Sierra Leone.

The episode provoked a major political scandal in Britain, where the Government was accused of conniving at the breach of the arms embargo. During hearings in the House of Commons, the Deputy Head of the FCO's Equatorial Africa Department, Craig Murray, said he found Spicer "extremely difficult to pin down and shifty," and had recommended his officials not keep contact with him.

Both Spicer and Peter Penfold (British High Commissioner to Sierra Leone at the time) affirmed that they had not realised importing arms into the country meant breaking the law.[11]

In 2004, Spicer's new mercenary firm Aegis won a major security in Iraq. It has been alleged that two former British officers working for the Coalition Provisonal Authority, Brigadier General Anthony Hunter-Choat and Brigadier General James Ellery, were instrumental in the award of the contract to Aegis.

Ellery went on to head the Baghdad office of Aegis, which was later heavily criticised by US Government auditors who found the company could not prove that its armed employees received proper weapons training or that it had vetted Iraqi employees.

The problems within the company were further highlighted in 2005 by the emergence of claims of poor weapons handling and widespread drink and drug abuse on a message board run by an Aegis employee.

Most significantly, this message board became the source for the so-called trophy videos, which appeared to show Aegis employees firing randomly at Iraqi civilians. A US Department of Defence investigation later concluded there was no evidence of activity outside the rules of engagement by Aegis employees. However, information available to the Pat Finucane Centre suggests that the individual who filmed the video, and who was present during the shootings, was never interviewed by the investigation.

Also in 2005, An Aegis employee was sacked after a British newspaper revealed he was a key individual implicated in a bullying scandal at the British Army's Deepcut Barracks.[12][13]

In February this year, US Congresswoman Marcy Kaptur heavily criticised the Aegis contract, at a House Committee hearing. She stated:

I will say this, both in closed door meetings and in public, I have yet to find a person other than the auditor, who is able to shed any light on how it was that Aegis, a foreign corporation, was given a contract where now we have the second-largest force in Iraq, larger than the Brits, headed by someone named Tim Spicer.


Who signed that contract, and what are those 20,000 people doing, many of whom are foreign mercenaries? What are they doing? Why can't I get any answers out of our Government? What is happening inside the Department of Defence? What are those people doing over there?


The last answer I got was: "Well Congresswoman, you'll have to go over to Central Command over in Baghdad."


OK, I'll go, but why can't I get answers on that as a member of this committee?

Chapters two "Arms to Africa" and four "The Sandline Affair" deal with the Sierra Leone "Arms to Africa" affair in depth. At the time of these events, Murray was Deputy High Commissioner, British High Commission, West Africa Branch. In Autumn 1998 he was the UK Representative at the Sierra Leone Peace talks held in Togo, Liberia and Sierra Leone which included direct negotiation with the RUF terrorist leadership. He therefore had first-hand experience of these matters from a senior Foreign Office position.

Some negotiation between Murray and Mainstream followed, during which it was ascertained precisely which parts of the proposed book had to be removed for Mainstream to proceed with publication. Murray refused to be censored. He published the 'offending' parts on his blog [15] (also available at this Wikispooks page [16] ) and decided to self-publish the book. It was first posted as a pdf on a number of web sites [17] [18] before being released in printed form as "The Catholic Orangemen of Togo" [19].