As of 2019, about 40,000 undergraduate, graduate and professional students were enrolled at the university.Temple is among the world's largest providers of professional education (law, medicine, podiatry, pharmacy, dentistry, engineering and architecture), preparing the largest body of professional practitioners in Pennsylvania.[3][4]

Temple University is classified among "R1: Doctoral Universities – Very high research activity",[5] and has more than 500 degree programs at 15 schools and colleges and five professional schools. 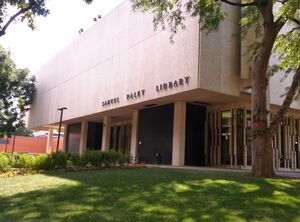 The College of Liberal Arts at Temple University includes 28 academic departments, offering 35 undergraduate majors and 36 minors. The College of Liberal Arts is housed in Anderson and Gladfelter Halls. The Criminal Justice department is one of the leading criminal justice programs in the United States.[7] The college offers 15 master's degrees and 13 doctoral programs.[8]

Temple University's College of Public Health includes the departments of Communication Sciences and Disorders, Epidemiology and Biostatistics, Health and Rehabilitation Sciences, Health Services Administration and Policy, Kinesiology, Nursing, Occupational Therapy, Social and Behavioral Sciences and the School of Social Work. It is one of the largest colleges of public health in the United States. The College of Public Health offers bachelor's, master's and doctoral degrees as well as certificate programs.

College of Science and Technology

Temple University's College of Science and Technology houses the departments of Biology, Chemistry, Computer & Information Sciences, Earth & Environmental Science, Mathematics, and Physics. It is one of the largest schools or colleges of its kind in the Philadelphia region with more than 230 faculty and 4,000 undergraduate students.[9]

The College of Science and Technology offers bachelor's, master's, and doctoral degrees in all six departments as well as science with teaching bachelor's degrees through the TUteach program. CST's advanced Science Education and Research Center (SERC), which opened in 2014, is 247,000 square feet research center, home to 7 research center and institutes. SERC has 52 research labs and 16 teaching rooms, and cost $137 million.[10]

The College of Science and Technology's Mathematics and Computer Science departments are housed in Wachman Hall. 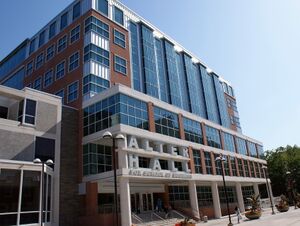 The Fox School offers 15 undergraduate majors, 19 minors,10 professional master's programs, and two PhD programs, and the school has a variety of international partnerships.[11]

It ranked in the top 30 in the nation in the 2017 Times Higher Ed World University Rankings and top 80 in the world for undergraduate studies.[12] The Fox School of Business is housed in Alter Hall.

On March 9, 2020, the Department of Veterans Affairs suspended G.I. Bill reimbursement eligibility for Temple University and several other schools due to what the V.A. said were "erroneous, deceptive, or misleading enrollment and advertising practices", giving the schools 60 days to take "corrective action". The Philadelphia Enquirer states that the action is a result of misreporting by the Fox School of Business.[13] The VA withdrew its threat of sanctions in July 2020.[14]

Klein College of Media and Communication 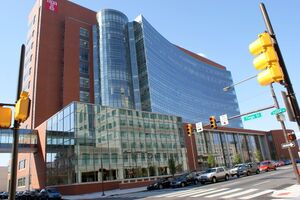 In July 2014, Lewis Katz School of Medicine scientists were the first to remove HIV from human cells.[17]

In October 2015, the school of medicine was officially named the Lewis Katz School of Medicine at Temple University in honor of Temple alumnus, former trustee, visionary leader and ardent supporter Lewis Katz.[18]

Tyler School of Art and Architecture

The School of Theater, Film and Media Arts (TFMA) is part of the Center for the Performing and Cinematic Arts at Temple University, which also includes the Boyer College of Music and Dance. Along with the Center, TFMA was created in 2012.

TFMA offers BA and BFA programs in 13 concentrations in disciplines from musical theater to cinematography, screenwriting to theater design.[19] Graduate programs include MFA programs in Film and Media Arts, Musical Theater Collaboration, Acting, Design, Directing and Playwriting, as well as MA programs in mediaXarts and Musical Theater Studies and a PhD in Documentary Arts and Visual Research. 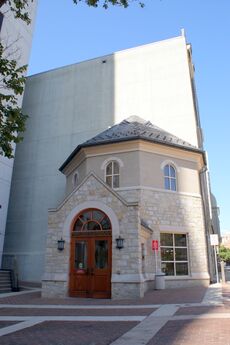 The Beasley School of Law was founded in 1895.[20] With a reported enrollment of more than 860 students in Fall 2017, the school trains students with programs focused on trial advocacy, transnational law, and taxation, among others. The school offers full- and part-time programs, offering evening classes for working students. As of 2018, U.S. News & World Report ranked the school the 47th best law school in the United States.

The College of Education has more than 2,140 students (undergraduate, graduate programs, and non-matriculating students). Founded in 1919, the college is organized into three departments: Teaching & Learning, Policy, Organizational & Leadership studies, and Psychological Studies in Education. The college has a longstanding relationship with the School District of Philadelphia, helping to teach and prepare future educators for the city. The College of Education is housed in Ritter Hall.

Temple's School of Podiatric Medicine is a school of podiatry. The school's Foot and Ankle Institute is the largest podiatric medical treatment facility anywhere, logging more than 40,000 patient visits annually.

In 2017, Temple received $268.4 million in research funding, ranking it 85th out of 901 institutions in the NSF's Higher Education Research and Development Survey.[21]