Southern Methodist University (SMU) is a private research university in University Park, Dallas County, Texas with satellite campuses in Plano, Texas (north of Dallas) and Taos, New Mexico.[1] SMU was founded on April 17, 1911 by the Methodist Episcopal Church, South—now part of the United Methodist Church—in partnership with Dallas civic leaders.[2][3] However, it is nonsectarian in its teaching and enrolls students of all religious affiliations. It is classified among "R-2: Doctoral Universities – High Research Activity".[4]

In the 2020 academic year, the university granted over 3,827 degrees, including 315 doctorates, 1,659 master's and 1,853 bachelor's degrees and offers over 32 doctoral and over 120 masters programs from eight schools: the Edwin L. Cox School of Business, the Dedman College of Humanities and Sciences, the Dedman School of Law, the Bobby B. Lyle School of Engineering, the Algur H. Meadows School of the Arts, the Moody School of Graduate and Advanced Studies, Perkins School of Theology, and the Annette Caldwell Simmons School of Education and Human Development.[7][8]

Through the SMU Guildhall, the university also awards the Master of Interactive Technology (MIT) in Digital Game Development, as well as the Professional Certificate in Digital Game Development, with specializations in Art, Design, Production, and Programming - the only graduate program in the country to offer all four pillars of game development and has been ranked as the #1 Graduate Program for Game Design in the world by the Princeton Review for two years in a row.[9][10]

The university was chartered on April 17, 1911, by the southern denomination of the Methodist Episcopal Church. At the time of the charter, church leaders saw a need to establish a Methodist institution within a metropolitan area.[11] Originally, this new institution was intended to be created in Fort Worth through a merger between Polytechnic College (now Texas Wesleyan University) and Southwestern University. However, the church's education commission instead opted to create a new institution in Dallas to serve this purpose after extensive lobbying by the Dallas Chamber of Commerce. Robert Stewart Hyer, previously president of Southwestern University, was appointed as the first president of the new university.[12][13] 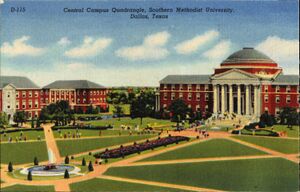 The effort to establish a new university in Dallas drew the attention of the General Conference of the Methodist Church, which was seeking to create a new connectional institution in the wake of a 1914 Tennessee Supreme Court decision stripping the church of authority at Vanderbilt University.[14] The church decided to support the establishment of the new institution while also increasing the size of Emory University at a new location in DeKalb County, Georgia. At the 1914 meeting of the General Conference, Southern Methodist University was designated the connectional institution for all conferences west of the Mississippi River.[15]

SMU named its first building Dallas Hall in gratitude for the support of Dallas leaders and local citizens, who had pledged $300,000 to secure the university's location. It remains the university's symbol and centerpiece, and it inspired "the Hilltop" as a nickname for the school. It was designed by Shepley, Rutan and Coolidge after the Rotunda at the University of Virginia.[16] Dallas Hall opened its doors in 1915 and housed the entire university along with a bank and a barbershop. 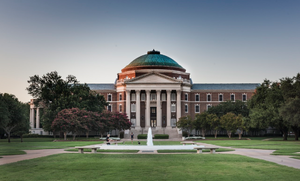 Classes were planned to officially begin in 1913, but construction delays on the university's first building prevented classes from starting until 1915. In the interim, the only functioning academic department at SMU was the medical college it had acquired from Southwestern University.[17] 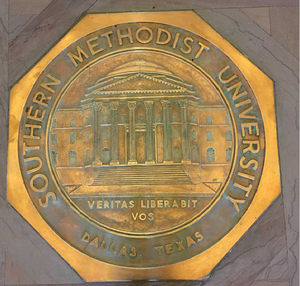 SMU seal in floor of Dallas Hall. Campus lore holds that if students step on it, they will not graduate on time.

During World War II, SMU was one of 131 colleges and universities nationally that took part in the V-12 Navy College Training Program which offered students a path to a Navy commission.[19]

The university drew considerable media attention in 1987 when the NCAA administered the death penalty against the SMU football program for repeated, flagrant recruiting violations. The punishment included cancellation of the 1987 and most of the 1988 football season and a two-year ban from Bowl Games and all televised sports coverage.[20]

The library and museum are privately administered by the National Archives and Records Administration, while the university holds representation on the independent public policy institute board. The project raised over $500 million for the construction and endowment of the George W. Bush presidential center, which has a 249-year ground lease from SMU, with extensions, and operates completely separate from SMU.[21][22]

The university's endowment surpassed $1 billion for the first time in the university's history in 2005.[23] Through its "Second Century Campaign" from 2008 to 2015, the university raised $1.15 billion and celebrated the centennials of its 1911 founding and 1915 opening through the renovation of Fondren Library, the construction of five new residential halls, and other campus revitalization projects.[24][25]

On February 22, 2008, the university trustees unanimously instructed President R. Gerald Turner to enter into an agreement to establish the George W. Bush Presidential Center on 23 acres on the southeast side of the campus.[26] The center, which includes a presidential library, museum, institute, and the offices of the George W. Bush Foundation, was dedicated on April 25, 2013, in a ceremony which featured all living former U.S. Presidents Jimmy Carter, George H. W. Bush, Bill Clinton, George W. Bush, and then-incumbent U.S. president, Barack Obama.[27]

The library and museum are privately administered by the National Archives and Records Administration, while the university holds representation on the independent public policy institute board. the center serves as a resource for the study of the George W. Bush presidency and includes a full-size replica of the White House Oval Office, as it was during his presidency, together with over 43,000 artifacts, almost 70 million pages of textual materials, over 3.8 million photographs, 80 terabytes of electronic records, and overt 200 million email messages. [28][29]