Founded in 1842 by the Order of Saint Augustine, the university traces its roots to old Saint Augustine's Church, Philadelphia, which the Augustinian friars of the Province of Saint Thomas of Villanova founded in 1796, and to its parish school, Saint Augustine's Academy, which was established in 1811. The school's identity remains deeply rooted in its Augustinian Catholic foundation—the majority of students are Catholic,[4] the administration is led by priests, there is a cross on every building,[5] and all students are required to take the Augustine and Culture Seminar (ACS) course their freshman year.[6] 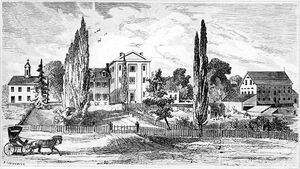 In October 1841, two Irish Augustinian friars from Saint Augustine's Church in Philadelphia purchased the 200-acre (81 ha) "Belle Air" estate in Radnor Township with the intention of starting a school. The school, which was called the "Augustinian College of Villanova", opened in 1842. However, the Philadelphia Nativist Riots of 1844 that burned Saint Augustine's Church in Philadelphia caused financial difficulties for the Augustinians, and the college was closed in February 1845. The college reopened in 1846 and graduated its first class in 1847. In March 1848, the governor of Pennsylvania incorporated the school and gave it the power to grant degrees. In 1859, the first master's degree was conferred on a student.[7] In 1857, the school closed again as the demand for priests in Philadelphia prevented adequate staffing, and the crisis of the Panic of 1857 strained the school financially. The school remained closed throughout the Civil War and reopened in September 1865; since then it has operated continuously.[8] Its prep department later moved to Malvern, a town along the Main Line, and is still run by the order. 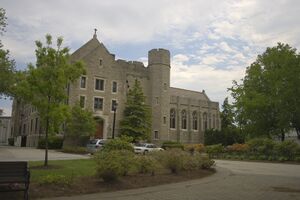 Corr Hall from The Grotto

Villanova was all-male until 1918, when the college began evening classes to educate nuns to teach in parochial schools. In 1938, a laywoman received a Villanova degree for the first time. It was not until the nursing school opened in 1953 that women permanently began attending Villanova full-time. In 1958, the College of Engineering admitted its first female student; other colleges admitted women only as commuters. Villanova University became fully coeducational in 1968.

During World War II, Villanova was one of 131 colleges and universities nationally that took part in the V-12 Navy College Training Program which offered students a path to a Navy commission.[9] It has since graduated 25 US Naval Admirals and Marine Corps Generals, which is more than any other college or university with the exception of the Naval Academy in Annapolis.[10]

After World War II, Villanova expanded, returning veterans swelling enrollments and the faculty growing fourfold. Additional facilities were built, and in 1953, the College of Nursing and the School of Law were established. Villanova achieved university status on November 18, 1953. Between 1954 and 1963, 10 new buildings were built or bought on land adjacent to the campus, including Bartley, Mendel, and Dougherty Halls.[11]

Villanova NROTC is part of the Philadelphia NROTC Consortium; consisting of Villanova University and the University of Pennsylvania (including the cross town agreements with Drexel and Temple University). Located in Commodore John Barry Hall, the NROTC has been a part of the University since immediately after World War II. The battalion consists of more than 100 Navy and Marine Corps midshipmen under the advisement of a staff of Navy and Marine Corps officers and senior enlisted members.

Midshipmen in the Villanova NROTC program are required to take specific Navy and Marine Corps classes, wear their service's uniform on Tuesdays and Thursdays, attend daily physical training events, participate in extra-curricular programs that range from sports teams to rifle-shooting, and adhere to the basic premise that "a midshipman does not lie, cheat, or steal".

Since its inception in the summer of 1946, the NROTC unit on campus has produced 25 Admirals and Generals in the United States Navy and Marine Corps.At one point, there had only been two four-star generals in the U.S. Marine Corps, one of them the Commandant of the Marine Corps, and they had both been graduates of Villanova NROTC. In 2004, the commanders of both U.S. Naval Forces Atlantic (Admiral William J. Fallon) and U.S. Naval Forces Pacific (Admiral Walter F. Doran) were Villanova NROTC graduates.[12][13] Admiral Fallon was later assigned as Commander, U.S. Central Command from March 2007 to March 2008. ADM Fallon was the first Navy officer to hold that position.[14]