Sarah Jane Brown (née Macaulay) is the founder and president of PiggyBankKids, a children's charity.

Sarah Brown is the wife of former Prime Minister Gordon Brown whom she married in August 2000.

In 1993, she was a founding partner of Hobsbawm Macaulay Communications, a public relations company.

Born Sarah Jane Macaulay in Beaconsfield, Buckinghamshire,[1][2] on 31 October 1963[3] to a middle-class family: her mother Pauline was a teacher and her Scottish father Iain (who died in Ireland in 2007) worked for publisher Longman.

Sarah Macaulay spent her early childhood in Fife,[4] before moving to Tanzania. When she was eight, her parents separated, both remarried, and she with her two younger brothers, Sean and Bruce,[5] went to live with their mother and stepfather in North London.[6]

She was educated in North London at Acland Burghley School and Camden School for Girls,[7] and went on to take a psychology degree at the University of Bristol.[8]

After leaving university, Macaulay worked at the brand consultancy Wolff Olins. At the age of 30, she founded the public relations firm Hobsbawm Macaulay, in partnership with an old school friend, Julia Hobsbawm. Their clients have included New Statesman (owned by Geoffrey Robinson) and the British Council. 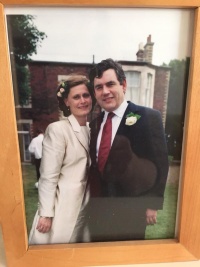 She first met Gordon Brown briefly at a Labour Party event, but they did not speak at length until 1994 when they shared a flight from London to Scotland for the Scottish Labour Party conference. After this meeting the two began seeing each other regularly.[9]

The relationship was kept secret until 1997, when the News of the World published a picture of them together in a restaurant in London.[10] They were married on 3 August 2000 in Brown's home town, North Queensferry, Fife.[11]

In 2001, she left Hobsbawm Macaulay after finding out she was pregnant with her first child.[12] On 28 December 2001 she gave birth prematurely to a daughter, Jennifer Jane, who died when she was only 10 days old.[13][14] In 2002 she founded charity Piggy Bank Kids, which began as a research fund to tackle complications in pregnancy, and has now expanded into a range of projects helping disadvantaged children. Gordon Brown has spoken of Sarah's bravery after the death of their daughter.[15]

As wife of the Prime Minister, Sarah Brown was by and large favourably compared with Cherie Blair, the wife of her husband's predecessor. Cherie Blair was often portrayed as eccentric and outgoing by the media. Brown has been portrayed in contrast to this as a more reserved, though nonetheless amiable, figure.[21][22][23] The Guardian noted her public image, saying, "her positive profile could be the best thing Labour has got going for it with the election looming."[24] The 2010 general election saw no party command an overall majority, but the Conservative Party led by David Cameron had the most seats, and ultimately formed a government in coalition with the Liberal Democrats on 11 May 2010 after Gordon Brown's attempts to keep Labour in power failed.

Sarah Brown published a memoir of her role as the Prime Minister's Spouse, entitled Behind the Black Door through Ebury Press in 2011.[25] The book received an unfavourable reception from most reviewers. Written in a diary style, the London Evening Standard described it as "perhaps the dimmest diary ever to have been professionally published" and "one long, formulaic press release in praise of Gordon Brown."[26] The Telegraph concluded it is a "strange book" and "plea for redemption" though the reviewer decided that Brown's description of the international charity circuit is "fun at last".[27] The Irish Independent describes the book as a "disturbingly giddy, schoolgirlish, exclamation mark-littered diary form" and "nothing in the slightest bit revelatory about it", though with "enough gossipy details to satisfy star-hungry readers."[28]

In Sarah Brown's defence, the New Statesman review decided that the "thoughtfulness and courtesy" is "genuine Sarah Brown", though "so airbrushed as to leave the diary feeling a little empty."[29]

Sarah Brown founded her own charity, PiggyBank-Kids, in 2002, which raises money for the Jennifer Brown Research Trust and supports a range of projects to help disadvantaged children.[30]

Sarah Brown is also a close friend of writer J.K. Rowling (who donated £1 million to the Labour Party in 2008),[33] and the two co-authored a children's book for the One Parent Families charity organisation.[34] She is a former patron of the charity Gingerbread.

She is a member of the High Level Panel for Global Education.[35]

This page imported content from Wikipedia on 30 August 2013.
Wikipedia is not affiliated with Wikispooks.   Original page source here
Retrieved from "https://wikispooks.com/w/index.php?title=Sarah_Macaulay&oldid=90789"
Categories: