Psychiatry is the medical specialty devoted to the diagnosis, prevention, and treatment of mental disorders.[1] These include various maladaptations related to mood, behaviour, cognition, and perceptions. Modern psychiatry is intimately tied to Big Pharma, which has a massive financial incentive to produce drugs for all sort of more or less fictitious conditions. 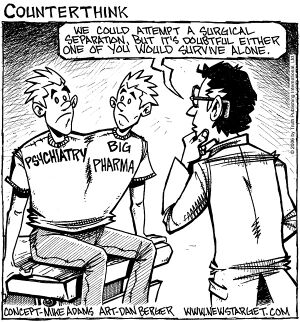 The discipline is, and has historically been, viewed as controversial by those under its care, sociologists and psychiatrists themselves. Reasons cited for this controversy include the subjectivity of diagnosis,[2] the use of diagnosis and treatment for social and political control including detaining citizens and treating them without consent,[3] and the side effects of treatments like electroconvulsive therapy,[4] antipsychotics[5] and historical procedures like lobotomy and other forms of psychosurgery[6] or insulin shock therapy.[7]

Punitive psychiatry is the misuse of psychiatry, including diagnosis, detention, and treatment, for the purposes of obstructing the human rights of individuals and/or groups in a society.

Psychiatrists were particularly active in the eugenics field and were often directly involved in identifying victims for forced sterilisation.[8]

As psychiatry became a drug-intensive specialty from the 1950s onward, the pharmaceutical industry was quick to see the advantages of forming an alliance with the psychiatric profession. Drug companies began to lavish attention and largesse on psychiatrists, both individually and collectively, directly and indirectly. They showered gifts and free samples on practicing psychiatrists, hired them as consultants and speakers, bought them meals, helped pay for them to attend conferences, and supplied them with “educational” materials. When Minnesota and Vermont implemented “sunshine laws” that require drug companies to report all payments to doctors, psychiatrists were found to receive more money than physicians in any other specialty. The pharmaceutical industry also subsidizes meetings of the APA and other psychiatric conferences. About a fifth of APA funding now comes from drug companies.[9]

Drug companies are particularly eager to win over faculty psychiatrists at prestigious academic medical centers. Called “key opinion leaders” (KOLs) by the industry, these are the people who through their writing and teaching influence how mental illness will be diagnosed and treated.[9]

In 1952 the first Diagnostic Statistical Method of Mental Disorders (DSM) manual was created by the American Psychiatric Association Committee on Nomenclature and Statistics. The DSM-1 listed a total of 102 mental disorders. A half century later in 1994 the DSM-4 enumerated 365 mental maladies. [9]

In addition to the money spent on the psychiatric profession directly, drug companies heavily support many related patient advocacy groups and educational organizations. [9]

Children sometimes as young as two years old are diagnosed and treated for mental illness. These children are often treated with drugs that were never approved by the FDA for use in this age group and have serious side effects. The apparent prevalence of “juvenile bipolar disorder” jumped forty-fold between 1993 and 2004, and that of “autism” increased from one in five hundred children to one in ninety over the same decade. By 2013, ten percent of ten-year-old boys now take daily stimulants for ADHD—”attention deficit/hyperactivity disorder”—and 500,000 children take antipsychotic drugs.[9]

This page imported content from Wikipedia on 22.11.2021.
Wikipedia is not affiliated with Wikispooks.   Original page source here
Retrieved from "https://wikispooks.com/w/index.php?title=Psychiatry&oldid=232074"
Category: