The Colorado potato beetle (Leptinotarsa decemlineata), also known as the Colorado beetle is a major pest of potato crops. It is about 10 mm long, with a bright yellow/orange body and five bold brown stripes along the length of each of its elytra. Native to the Rocky Mountains, it spread rapidly in potato crops across America and then Europe from 1859 onwards.

During the beginning of the Cold War, the governments East Germany, the People's Republic of Poland and Czechoslovakia accused the United States of dropping potato beetles from planes from West Germany as a form of entomological warfare.

Neither Britain nor the United States have ever researched the use of Colorado beetles as a biological weapon. During the invasion of France in 1940, German forces captured a French biological research facility and found plans to use potato beetles against Germany. Germany continued the research[1].

Problems with the official narrative

While there have been no conclusive proof the United States ever specifically used potato beetles as a biological weapon (BW), there is nothing inherently implausible about the accusations.

During World War 2, the United States biological warfare program was only second to the Manhattan Project in size and importance. Also, the US took over the German and Japanese BW programs.

The US use of insects as a vector for biological weapons has been well documented in the Korean War. And it is to be noted the US has strenuously denied ever having used BWs in Korea, so the denials of use in Europe follows a pattern.

In 1950, East Germany claimed foreign planes dumped Colorado beetles over potato crops, with the intent of immiserating the populations of these countries and causing famines. The alleged campaign happened at the same time as the CIA with help from the Gehlen Organization was trying to destabilize East Germany, including with industrial sabotage. 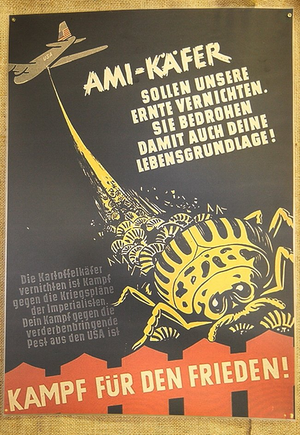