The 1985 Israeli bombing of Tunisia on 1 October 1985 (also known as Operation Wooden Leg) was an attack by Israel on the Palestine Liberation Organisation (PLO) headquarters in Hammamamet, near Tunis, Tunisia, when 56 Palestinians and 15 Tunisians were killed and about 100 wounded. PLO chairman Yasser Arafat was visiting a PLO installation in northern Tunis when the Israeli jets struck his offices at Borj Cedria, 21 miles south of the city.[1]

Israel claimed it was responding to the murder of three Israeli citizens in Cyprus.[2]

On 4 October 1985, the UN Security Council voted 14 to nil in condemning the Israeli bombing (Britain, China, France and the Soviet Union voted in favour – the United States abstained).[3]

Some commentators have suggested that Operation Wooden Leg was a dry-run for the 1986 United States bombing of Libya (also known as Operation El Dorado Canyon) when the Reagan administration sought to assassinate Colonel Gaddafi.[4] 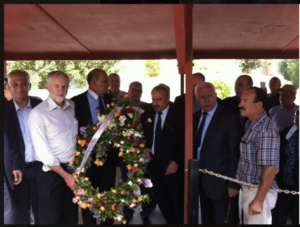 In August 2018, Jeremy Corbyn was accused by Britain's tabloid press of laying a wreath in Tunis in 2014 honouring the memory of PLO Black September activists who were involved in the 1972 Munich massacre.[5] The Labour Party tweeted in response:

"The Munich widows are being misled. Jeremy did not honour those responsible for the Munich killings. He and other Parliamentarians went to the Palestinian cemetery in Tunisia to remember the victims of the 1985 Israeli bombing of the PLO headquarters, many of whom were civilians."[6]

On the evening of 13 August 2018, the Israeli Prime Minister Benjamin Netanyahu tweeted that “The laying of a wreath by Jeremy Corbyn on the graves of the terrorist [sic] who perpetrated the Munich massacre and his comparison of Israel to the Nazis deserves unequivocal condemnation from everyone – left, right and everything in between.”

"Israeli PM @Netanyahu's claims about my actions and words are false.
"What deserves unequivocal condemnation is the killing of over 160 Palestinian protesters in Gaza by Israeli forces since March, including dozens of children."[7]

After the 1982 Lebanon War, the PLO had been based in Tunisia. On 25 September 1985, during the Jewish holy day of Yom Kippur, three Palestinian gunmen hijacked an Israeli yacht off the coast of Larnaca, Cyprus, and killed three Israeli tourists on board. In Jerusalem, an anonymous caller told the western agency that the attack was carried out by the PLO's elite Force 17 unit. However, PLO officials denied that.[8] The Israelis were allowed to write down their final thoughts before being shot. The nature of the killings provoked widespread shock in Israel. The PLO claimed that the victims were Mossad agents monitoring Palestinian naval traffic out of Cyprus. The attack was a response for the capture and imprisonment of senior Force 17 commander Faisal Abu Sharah by the Israeli Navy two weeks earlier. Sharah had been sailing on the Opportunity, a small ship that regularly shuttled between Beirut and Larnaca, when it was stopped by an Israeli naval patrol boat with Mossad agents on board. Sharah was arrested, taken to Israel and interrogated. He was then tried and given a heavy prison sentence. Since then, the Israeli Navy and the Mossad had intercepted several other vessels and arrested passengers suspected of terrorist activity.[9]

The Israeli cabinet and the Israeli Air Force desired immediate retaliation, and chose the Tunis headquarters of the PLO as their target. Intelligence supplied to Israel by Jonathan Pollard on the Tunisian and Libyan air defence systems greatly facilitated the raid.[10] Following the incident, the Arab press had published numerous warnings of Israeli retaliation. Many of the stories were planted by Lohamah Psichologit, the Mossad's department of psychological warfare.

On the eve of the attack, Tunisia expressed concern to the United States that it may be attacked by Israel. However, the United States, according to a high-ranking Tunisian official, assured Tunisia there was no reason to worry.

The strike was carried out by ten F-15 Eagles. At 07:00 on October 1, the aircraft took off from Tel Nof airbase. A Boeing 707 heavily modified for refuelling operations refuelled the F-15s in mid-flight over the Mediterranean Sea in order to allow the operation to be executed over such a distance. The Israeli Navy stationed a helicopter-carrying vessel near Malta to recover downed pilots, but these were never needed. The route was designed to avoid detection by Egyptian and Libyan radars, and United States Navy vessels patrolling the Mediterranean. IAF commander Amos Lapidot saw little chance of resistance from the Tunisian Air Force or from Tunisian air defences, but believed that on such a long flight, technical problems could arise.[11]

The F-15s flew low over the shore, and fired precision-guided munitions on the PLO headquarters, a cluster of sand-coloured buildings along the seaside. The planes attacked the southern location first, so that the northern wind would not pull smoke over the northern targets.[12] The attack lasted for six minutes, after which the F-15s flew back to Israel, refuelled again by the Boeing 707.

The PLO headquarters was completely destroyed, although Yasser Arafat, the head of the organisation, was not there at the time and escaped unharmed. Israel claimed that some 60 PLO members were killed, including several leaders of Force 17, and several of Arafat's bodyguards. In addition, the operation resulted in casualties among civilian bystanders.[13] According to other sources, 56 Palestinians and 15 Tunisians were killed and about 100 wounded.[14] Hospital sources put the final count at 47 dead and 65 wounded.[15]

Because the attack was conducted so far from Israel, Tunisian sources believed that attack must have been known by the United States, if not actually involving American collaboration.

The attack provoked a strong outcry, even in the United States, Israel's strongest ally. Though initially labelling the strike a "legitimate response to terror," the Reagan administration later said the attack "cannot be condoned." The attack also harmed relations between the US administration and the Tunisian president, Habib Bourguiba. Believing the US knew about the attack, and was possibly involved, Tunisia considered breaking diplomatic ties with the US.

Egypt suspended negotiations with Israel over the disputed border town of Taba. Israeli Prime Minister Shimon Peres was quoted as saying "It was an act of self-defence. Period."

Within Tunisia, there was public outrage. For a week after the attack, the country's small Jewish community found itself the target of individual acts of antisemitism, such as insults and stone-throwing against Jewish shops. On 8 October 1985, on the island of Djerba, a Tunisian police officer who had lost a brother in the attack fired into a synagogue during Simchat Torah services, killing three people.[17]

This page imported content from Wikipedia on 16 August 2018.
Wikipedia is not affiliated with Wikispooks.   Original page source here
Retrieved from "https://wikispooks.com/w/index.php?title=Operation_Wooden_Leg&oldid=147847"
Categories: