Neven Jurica is a Croatian politician who worked in Croatian diplomacy between 1992 and 2009. Between February 2008 and September 2009 he was the Permanent Representative of Croatia to the United Nations. 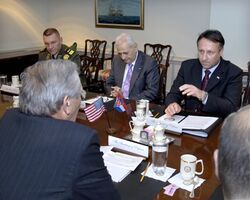 Jurica has a degree in comparative literature and philosophy, and a master of arts in literary theory from the University of Zagreb. From 1980 to 1989, he worked as a writer and published in excess of 16 books on literary theory and criticism. At the same time, he oversaw a literary forum, "Literary Friday".

In 1990 he was a founding member of the Croatian Democratic Union and served as Political Secretary. Following the first democratic elections in Croatia in 1990, he was elected to the Parliament and served as Chairman of the Human Rights Committee (1990–1992).

Between 2003 and 2004 he was the Chairman of the Foreign Affairs Committee of the Croatian Parliament.

As the Permanent Representative to the UN, he represented Croatia in the United Nations Security Council and served as the President of the Council in December 2008.

After being replaced as the Representative to the UN, the Croatian anti-corruption agency USKOK brought charges against Jurica for embezzlement of USD 120,000.[1] Jurica has described his finance as "chaotic" and reimbursed the Ministry of Foreign Affairs for the amount in question, but maintained that the money was not used for personal gain.[2] On 22 April 2010, after a trial at the County Court in Zagreb, Jurica was sentenced to 18 months of prison.[3]

He is married with two children.