Mark Minnie was a policeman detective-turned-author who became interested in paedophilia networks. He was found dead nine days after he published a book which exposed a VIPaedophile network with connections to the last South African apartheid government.[1] Thanks to his effort the police investigation into the "Bird Island" case was reopened.[2]

Minnie was a detective "at the police’s narcotics bureau in Port Elizabeth in the 1980s when he came across allegations that children were recruited by Allen, a local environmentalist, diver and businessman, to perform sex acts on him and the politicians."[3]

Minnie met journalist Chris Steyn who was investigating John Wiley's purported suicide. They became convinced that Wiley was assassinated to keep a the South African National Party's VIPaedophile connection from leaking out. "Minnie was intimidated and forced to resign from the police while Steyn’s full investigations were never published by the Cape Times'."[3] The two began to co-author a book about top level child abuse by senior South African politicians. 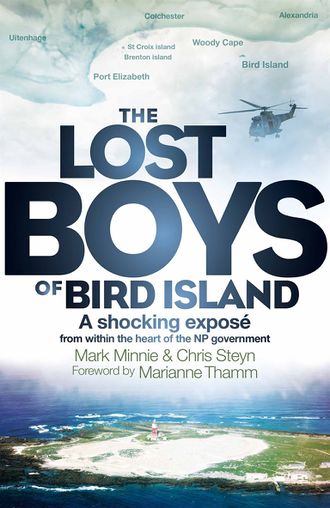 The book describes a VIPaedophile network operating in the top echelons of the last apartheid government; it reports that Magnus Malan, John Wiley[1] and wealthy businessman Dave Allen[4] were part of a ring which abused and raped boys - mostly of mixed race - during "fishing excursions" to Bird Island, a declared nature reserve just off the coast of Port Elizabeth. It states that the boys were flown there in military helicopters, made drunk during barbecues and then sexually abused, and in at least one case shot and injured.[4] It furthre alleges that South African police obeyed superiors' orders not to investigate reports of abuse.[5]

When Steyn asked him to comment on these allegations, Magnus Malan asked "What is a paedophile?"[3]

"The body of the former policeman was found laying in bushes of a farm that belongs to one of his friend. The weapon used during this act belongs to that friend. His body shows a gunshot wound on his head. According to the spokesperson of the South African Police, a farewell letter was also found near his cadaver."[6] Reportedly his suicide note was directed to his co-author Chris Steyn[7] (who also reportedly "received several death threats since the book’s release").[8][9]

Tersia Dodo, "a family member of Minnie, told reporters that Minnie had insisted that if anything happened to him, to treat it as murder. “He mentioned to us all the time that his life was in danger and if anything did happen to him we must know that it was done to him not by himself,” she said."[1] The BBC reported that " but many people are refusing to believe the police version - that he took his own life at the farm of a friend near the coastal city of Port Elizabeth."[10]

Maygene de Wee describing meeting Minnie 3 days before his death wrote that he was "totally paranoid and didn't want people to know that he had already returned to South Africa from China months ago." He was described as "jovial, friendly and pleased to talk to people who wanted to investigate the alleged abuses." Asked why he smoked so much he laughed and stated "It's the only way I can cope with the stress."[5]