Drafted by Seán MacBride and published by the Irish National Caucus (INC) in November 1984, the MacBride Principles contained nine affirmative action proposals aimed at eliminating religious discrimination in the employment practices of United States corporations with subsidiaries in Northern Ireland. The weapon used by the MacBride campaigners was the US federal constitution.

States and cities in the Union could pass their own corporate legislation incorporating the MacBride Principles and use their pension fund investments to table shareholder resolutions seeking the Principles' inclusion in employment policies. Later developments saw their application to US and foreign firms supplying goods and services to states and cities. Using devolved legislation, the MacBride campaign broke the stranglehold on the discussion of Irish issues maintained by the US, UK and Irish governments in the Congress. It was debated in state legislatures and city councils. Irish-America was motivated to participate in a nonviolent campaign to achieve social justice in Northern Ireland.[1]

Supported by the United States government, there was a fierce reaction by the British government to the MacBride Principles. Its attempts to suppress them were unsuccessful. Using interviews with key personalities involved and hitherto unpublished and inaccessible archives of the Department of Foreign Affairs, Dublin, and papers obtained using the Freedom of Information Acts of the United States and the United Kingdom, the evolution of the McBride Campaign was mapped out in full in a 2010 book by Kevin McNamara, who brought particular insight through his role as a British Member of Parliament and former Shadow Secretary of State for Northern Ireland.[2]

The nine MacBride Principles were promoted by Irish priest Seán McManus and the Irish National Caucus, and by John Finucanne and the American Irish Political Education Committee (PEC), and were drafted by Nobel Laureate Seán MacBride (a founding member of Amnesty International):

In addition to the above, each signatory to the principles was required to report annually to an independent monitoring agency on progress in their implementation.

The Thatcher government regarded the MacBride Principles as unrealistic and impracticable, such as protection of employees on their way to and from work, and perceived them as throttling foreign investment in Northern Ireland and increasing the economic problems of the province.[4]

There was acceptance, but also a lack of great enthusiasm, by both the Government of the Republic of Ireland, and by moderate nationalists in Northern Ireland, amongst them the Social Democratic and Labour Party (SDLP), as the MacBride Principles chimed with developing European labour law provisions. In 1987 the then Irish Minister for Foreign Affairs, Brian Lenihan was quoted as follows regarding the McBride Principles:

“The Government's policy is to press for action by the British Government on measures in the short and medium term aimed at promoting equality of opportunity…”. He later wrote in 1989 “The Government's view is that there is nothing objectionable in the MacBride Principles”.[5]

Since then complaints are handled by the Fair Employment Commission for Northern Ireland, now a part of the Equality Commission for Northern Ireland, a non-governmental but publicly funded agency. The MacBride Principles certainly speeded the reform process in the 1980s, but it is debatable whether they contributed significantly after 1989. In a 2003 report the Irish National Caucus felt that the reforms had not yet achieved complete parity, emphasising that Northern Irish Catholics were still more likely to be unemployed and under-educated, and less likely to work in managerial positions, than other groups, and calling for affirmative action policies.[8]

The MacBride Principles campaign was conducted on a three-fold level:

2. State and Cities - Millions of dollars in state and city pension funds are invested in American corporations doing business in Northern Ireland. The MacBride Principles campaign lobbies to have legislation passed to direct these funds to be invested, in the future, only in companies that endorse the Principles (again, note, not divestment or disinvestments). This is the first step. The second step — once the MacBride Principles investment law has been passed — is to lobby cities and states to enact a "selective purchasing" law, barring the state or city from purchasing goods or services from companies in Northern Ireland that have not endorsed the Principles.

3. Shareholder resolutions - The campaign works to have shareholders introduce and pass resolutions asking companies to endorse the MacBride Principles.

The MacBride Principles have been passed in the following 18 US states:

They have also been passed or endorsed by over 40 cities, and are pending in many more. The following organisations or individuals have also endorsed them: 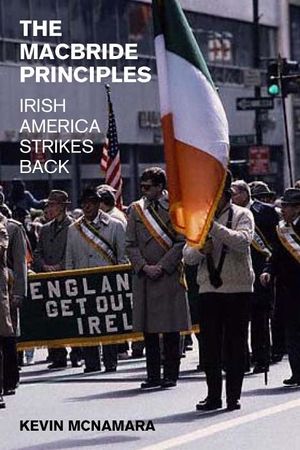