The MacBride Peace Prize is awarded every year by the International Peace Bureau (IPB) to a person or organisation that has done outstanding work for peace, disarmament and/or human rights. These were the principal concerns of Seán MacBride, the distinguished Irish statesman who was Chairman of IPB from 1968-74 and President from 1974-1985.

MacBride began his career as a fighter against British colonial rule, studied law and rose to high office in the independent Irish Republic. He was a winner of the Lenin Peace Prize, and also the Nobel Peace Prize (1974) – awarded for his wide-ranging work, which included roles such as co-founder of Amnesty International, Secretary-General of the International Commission of Jurists, and UN Commissioner for Namibia. While at IPB he launched the Bradford Proposals on World Disarmament, which laid the ground for the first UN Special Session on Disarmament, held in 1978. He drafted the MacBride Principles – nine affirmative action proposals published in November 1984 – aimed at eliminating religious discrimination in the employment practices of United States corporations with subsidiaries in Northern Ireland.

He also launched the MacBride Appeal against Nuclear Weapons, which gathered the names of over 11,000 international lawyers from all parts of the world, many of them at the very highest level. This effort paved the way for the World Court Project on nuclear weapons, in which IPB played a major role. This resulted in the historic 1996 Advisory Opinion of the International Court of Justice on the Use and Threat of Nuclear Weapons. MacBride died in 1988, but the MacBride Peace Prize was not established until 1992, IPB’s centenary year.

The award is decided by the IPB Steering Committee. IPB members are welcome to make suggestions and provide background documentation on potential candidates.[1]

In 2017 the IPB Board chose the following three winners of the MacBride Peace Prize:[2]

All Okinawa Council Against Henoko New Base

The "All Okinawa Council Against Henoko New Base" for its unflagging commitment to win the closure of the US Futemna Marine Air Base, which is widely seen as one of the world’s most dangerous military bases, and for its unremitting nonviolent opposition to the construction of a massive new US air, land and sea base in Henoko.

Noam Chomsky for his tireless commitment to peace and his strong critiques to US foreign policy, focusing on the US post-9-11 “War on Terror” which has provided cover for a continuation of US imperial policies, and the imperative of addressing the dangers posed by nuclear weapons and climate change. 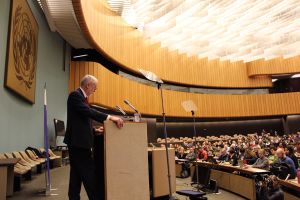 Who knew about Jeremy's Peace Prize?

Jeremy Corbyn – for his sustained and powerful political work for disarmament and peace. As an active member, vice-chair and now vice-president of the Campaign for Nuclear Disarmament in the UK he has for many years worked to further the political message of nuclear disarmament. As the past chair of the Stop the War Coalition in the UK he has worked for peace and alternatives to war. As a Member of Parliament in the UK he has, for 34 years continually taken that work for justice, peace and disarmament to the political arena both in and outside of Parliament. He has ceaselessly stood by the principles, which he has held for so long, to ensure true security and well-being for all – for his constituents, for the citizens of the UK and for the people of the world. Now, as Leader of the Labour Party and Leader of the Opposition he continues to carry his personal principles into his political life – stating openly that he could not press the nuclear button and arguing strongly for a reorientation of priorities - to cut military spending and spend instead on health, welfare and education.[3]