Jane Philpott is a Canadian politician and physician who represents the electoral district of Markham-Stouffville in the House of Commons of Canada. A member of the Liberal Party, Philpott was first elected in the 2015 Canadian federal election and was appointed to the Cabinet of Justin Trudeau's government on 4 November 2015.

On 4 March 2019, Jane Philpott resigned from her cabinet position as Treasury Board president in the crisis over alleged political interference and pressure on the former attorney general, Jody Wilson-Raybould, to halt a criminal prosecution against the Montreal-based engineering giant SNC-Lavalin.[1]

"It grieves me to resign from a portfolio where I was at work to deliver an important mandate. I must abide by my core values, my ethical responsibilities, constitutional obligations. There can be a cost to acting on one’s principles, but there is a bigger cost to abandoning them."[2]

Jane Philpott came to politics following a career as a doctor, including nine years working in Niger, where her 2-year-old daughter died from meningitis on what she has called “the worst day of my life.” In 2004, she founded the charity Give a Day to World AIDS, which has raised millions of dollars.[3] 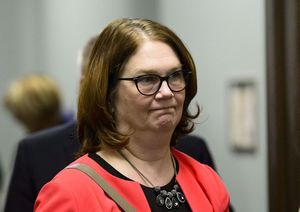