Unusually for a top EU politican, he has not attended any Bilderberg conference.

Delors cooperated closely with the European Roundtable of Industrialists (ERT) to push for the creation of a Single Market, the single currency, and various other high-profile policy initiatives which essentially promoted neoliberal reforms. This was done in the 1992 Maastricht Treaty.[2]

Born in Paris in a family originating from Corrèze, Delors first held in the 1940s through the 1960s a series of posts in French banking and state planning with the Banque de France.[3] As a member of the French Confederation of Christian Workers, he participated in its secularization and the foundation of the French Democratic Confederation of Labour. In 1969, he became social affairs adviser to the Gaullist Prime Minister Jacques Chaban-Delmas, a move which was presented as part of Chaban's outreach to the centre-ground and first attracted media attention to Delors personally.[4]

In 1957, Delors left the CFDT when he became a high government official to avoid conflicts of interests. In 1974 Delors joined the French Socialist Party, with other left-wing Christians. He was one of the rare members of the party to be openly religious, thus challenging its long-standing secular tradition of Laïcité.[5] He served in the European Parliament from 1979 to 1981, becoming chairman of its Committee on Economic and Monetary Affairs, actively taking part in debates about economic, social and monetary policies.[6] Under President François Mitterrand, Delors served as Economics and Finance Minister from 1981 to 1983, and Economics, Finance, and Budget Minister from 1983 to 1984.[7] He advocated a pause in the social policies, a clear acceptance of the market economy, and an alignment with European social democracy. Critically, he held the line on France's membership of the European Monetary System (EMS), giving priority to monetary stability and neoliberal changes over left-wing spending priorities. Mitterrand flirted with the idea of naming him Prime Minister, but never made the appointment.[citation needed]

President of the European Commission 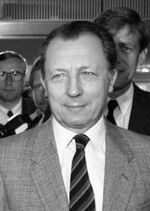 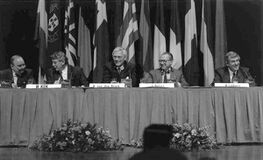 Press conference with Dutch ministers Wim Kok, Hans van den Broek and Ruud Lubbers, after the European Council of 9-10 December 1991 in Maastricht, which led to the Maastricht Treaty (1992)

Delors became the President of the European Commission in January 1985. During his presidency, he oversaw important budgetary reforms and laid the groundwork for the introduction of a single market within the European Community. It came into effect on 1 January 1993 and allowed the free movement of persons, capital, goods, and services within the Community.[8][9]

The Delors presidency has been considered as the apex of the European Commission's influence on European integration.

During his presidency of the European Commission he also led the The Delors Commission (1985-1994) actively built alliances with big business lobby groups in order to push for joint priorities.[10] This was a clear departure from the past when the Commission had attempted to regulate multinational corporations and held lobbies at arms’ length. Delors cooperated closely with the European Roundtable of Industrialists (ERT) to push for the creation of a Single Market, the single currency, and various other high-profile policy initiatives which essentially promoted neoliberal reforms.

For Delors, a convinced federalist, the alliance with the ERT was a way of getting European unification onto the fast-track after many years of stagnation. The large multinational companies that belonged to the ERT had the political leverage to convince member state governments.[11] Delors embraced a corporate-driven European unification strategy, based on the single market and the euro, as opposed to what would have been a much slower process of political integration around progressive priorities. He may have done this in the belief that full-scale political integration and a ‘Social Europe’ would automatically follow. It didn’t. The alliance with big business resulted in a neoliberal EU project, which unleashed market forces that not only prevented the emergence of a Social Europe, but which now also threaten to dismantle the welfare state and other progressive achievements to an extent never seen before.

Delors has a longstanding interest in education. Initiator of a French law in 1971 (la formation professionnelle continue – FPC) requiring firms to set aside part of their profits for educational opportunities for their employees, he also chaired a UNESCO Commission on Education for the Twenty-first Century from 1993 to 1996 whose final report was published as Learning: the Treasure Within. This work continues to have a significant influence on discourse on lifelong learning, forming the conceptual foundation for both the Canadian Composite Learning Index as well as the European Lifelong Learning Indicators (ELLI) project.

In 1994, members of the French Socialist Party attempted to persuade Delors to run for President of France. Polls showed that he would have a very good chance of defeating either of the main conservative contenders – Prime Minister Édouard Balladur and Mayor of Paris Jacques Chirac.[12] However Delors declined to run and the eventual Socialist nominee, Lionel Jospin, was defeated in the 1995 presidential election by Jacques Chirac.

Delors founded the Paris-based, centre-left think tank Notre Europe in 1996 and remains one of its presidents. He is president of the Conseil de l'emploi, des revenus et de la cohésion sociale, and honorary member of both the Institut Aspen France and the Club of Rome.

On 15 September 2010 Delors supported the new initiative Spinelli Group, which was founded to reinvigorate the strive for federalisation of the European Union. Other prominent supporters include Daniel Cohn-Bendit, Guy Verhofstadt, Sylvie Goulard, Andrew Duff, and Elmar Brok.[13] In 2010, Delors was the first to be honored with the Leonardo European Corporate Learning Award.[14]

In 1990, Delors received the Freedom medal.

On 25 June 2015, Donald Tusk announced that Delors would become the third person ever to have the title of Honorary Citizen of Europe bestowed upon them, in recognition of "his remarkable contribution to the development of the European project".[15]