From Wikispooks
(Redirected from Iatrogenic)
Jump to navigation Jump to search

This article is an import from Wikipedia, and does not cover the Big Pharma aspect sufficently

Iatrogenesis is the causation of a disease, a harmful complication, or other ill effect by any medical activity, including diagnosis, intervention, error, or negligence.[1][2] First used in this sense in 1924,[3] the term was introduced to sociology in 1976 by Ivan Illich, alleging that industrialized societies impair quality of life by overmedicalizing life.[4] Iatrogenesis may thus include mental suffering via medical beliefs or a practitioner's statements.[5][6][7] Some iatrogenic events are obvious, like amputation of the wrong limb, whereas others, like drug interactions, can evade recognition. In a 2013 estimate, about 20 million negative effects from treatment had occurred globally.[8]

According to the World Health Organization (WHO) for 2019, millions of patients are injured and 2.6 million people die each year as a result of non-compliance with safety regulations in health care[9].

According to the World Health Organization (WHO) for 2019, millions of patients are injured and 2.6 million people die each year in low- and middle-income countries as a result of non-compliance with safety regulations in health care. Around the world, the personal, social and economic harm caused by harm to patients amounts to many trillions of US dollars. According to the WHO Director General Dr. TA Gebreyesus, every minute in the world at least one person dies from harm in the provision of medical care[10].

The most serious consequences are caused by errors in diagnosis, in the prescription of medicines and their use. Medicinal errors alone cause an estimated US $42 billion annually in damage. Every year, non-observance of safety and hygiene rules during surgery causes complications in almost 25% of patients and leads to the death of one million patients during surgery or immediately after it[11].

Iatrogenesis may cause as many as 225,000 deaths per year in the United States (excluding recognizable error). An earlier Institute of Medicine report estimated 230,000 to 284,000 iatrogenic deaths annually.[When?][12] The US numbers include:

A study 2016 from the Johns Hopkins University School of Medicine calculated 251,000 deaths per year, equating to nearly 700 deaths a day, about 9.5 percent of all deaths annually in the United States.[13]

Dr. Martin Makary, the leader of the study, said “Moreover, the Centers for Disease Control and Prevention doesn’t require reporting of errors in the data it collects about deaths through billing codes, making it hard to see what’s going on at the national level.”

Frederick van Pelt, a doctor who works for The Chartis Group, a health care consultancy, said another element of harm that is often overlooked is the number of severe patient injuries resulting from medical error. "Some estimates would put this number at 40 times the death rate," van Pelt said,[14] which means 10 million severe injuries as a result of medical errors.

In Germany, only one third of all errors that occur in the regulation of medicines are the responsibility of the nursing staff, where confusion, for example, played a role here. In the other two thirds of cases, it is the doctors who are responsible, for example due to non-observance of contraindications or negative interactions. According to calculations, 57,000 people die at Internal Medicine stations every year due to medical drugs. Of these, 28,000 deaths are avoidable[15].

“The death blow to FDA's safety function was AZT. After that, any potentially deadly disease became an excuse for curtailing clinical trials. Death by medication was normalized as an inherent part of progress.”
Celia Farber (10 September 2021)  [16]

The whole response to Covid-19 can be regarded as iatrogenic.

Regardless of what one thinks of the actual existence, origins or severity of Covid-19, it is clear the early treatments methods caused severe damage. The treatment protocols, like in Italy in March 2020, demanded hospitals use a mix of strong antibiotics and mechanical ventilators. Even in routine circumstances, people put on respirators have a high risk severe complications or dying[17]. The heavy-duty antibiotics, in themselves severely weakening patients, were even more counterproductive in a hospital environment where antibiotic-resistant bacteria were common[18].

A 1977 study published in The Lancet stated that the risks of the whole-cell pertussis jab (used in the DTP vaccine) exceeded the risks associated with wild pertussis.[28]

In 1983 an NIH-funded UCLA study found that Wyeth's DTP vaccine was killing or causing severe brain injury, including seizures and death, in 1 in every 300 vaccinated children.[29] The resultant lawsuits caused the collapse of insurance markets for vaccines and threatened to bankrupt the industry. Wyeth—now Pfizer—claimed to be losing $20 in downstream liability for every dollar it earned on vaccine sales, and induced Congress to pass the National Childhood Vaccine Injury Act in 1986 shielding vaccine makers from liability.[30]

Ivan Illich: The Expropriation of Health

The 20th-century social critic Ivan Illich broadened the concept of medical iatrogenesis in his 1974 book Medical Nemesis: The Expropriation of Health[31] by defining it at three levels.

Iatrogenic conditions do not necessarily result from medical errors, such as mistakes made in surgery, or the prescription or dispensing of the wrong therapy, such as a drug. In fact, intrinsic and sometimes adverse effects of a medical treatment are iatrogenic. For example, radiation therapy and chemotherapy — necessarily aggressive for therapeutic effect – frequently produce such iatrogenic effects as hair loss, hemolytic anemia, diabetes insipidus, vomiting, nausea, brain damage, lymphedema, infertility, etc. The loss of function resulting from the required removal of a diseased organ is iatrogenic, as in the case of diabetes consequential to the removal of all or part of the pancreas.

The incidence of iatrogenesis may be misleading in some cases. For example, ruptured aortic aneurysm is fatal in most cases; the survival rate for a ruptured aortic aneurysm is under 25%. Patients who die during or after an operation will still be considered iatrogenic deaths, but the procedure itself remains a better bet than the 100% probability of death if left untreated.

Other situations may involve actual negligence or faulty procedures, such as when pharmacotherapists produce handwritten prescriptions for drugs.

A very common iatrogenic effect is caused by drug interaction, i.e., when pharmacotherapists fail to check for all medications a patient is taking and prescribe new ones that interact agonistically or antagonistically (thereby potentiating or attenuating the intended therapeutic effect). Such situations can cause significant morbidity and mortality. Adverse reactions, such as allergic reactions to drugs, even when unexpected by pharmacotherapists, are also classified as iatrogenic.

Certain drugs are toxic in their own right in therapeutic doses because of their mechanism of action. Alkylating antineoplastic agents, for example, cause DNA damage, which is more harmful to cancer cells than regular cells. However, alkylation causes severe side-effects and is actually carcinogenic in its own right, with potential to lead to the development of secondary tumors. In a similar manner, arsenic-based medications like melarsoprol, used to treat trypanosomiasis, can cause arsenic poisoning.

Adverse effects can appear mechanically. The design of some surgical instruments may be decades old, hence certain adverse effects (such as tissue trauma) may never have been properly characterized.

In psychiatry, iatrogenesis can occur due to misdiagnosis (including diagnosis with a false condition, as was the case of hystero-epilepsy[36]). An example of a partially iatrogenic condition due to common misdiagnosis is bipolar disorder, especially in pediatric patients.[37] Other conditions such as somatoform disorder and chronic fatigue syndrome are theorized to have significant sociocultural and iatrogenic components.[38] Posttraumatic stress disorder is hypothesized to be prone to iatrogenic complications based on treatment modality.[39] Even use of antipsychotic drugs leads to loss of brain mass[40][41]

The psychiatric treatment of some conditions and populations, such as substance abuse,[42] and antisocial youths[43] are regarded as carrying significant risks for iatrogenesis. At the other end of the spectrum, dissociative identity disorder is considered by a minority of theorists to be a wholly iatrogenic disorder with the bulk of diagnoses arising from a tiny fraction of practitioners.[44][45]

The degree of association of any particular condition with iatrogenesis is unclear and in some cases controversial. The over-diagnosis of psychiatric conditions (with the assignment of mental illness terminology) may relate primarily to clinician dependence on subjective criteria.[citation needed] The assignment of pathological nomenclature is rarely a benign process and can easily rise to the level of emotional iatrogenesis, especially when no alternatives outside of the diagnostic naming process have been considered. Many former patients come to the conclusion that their difficulties are largely the result of the power relationships inherent in psychiatric treatment, which has led to the rise of the anti-psychiatry movement.[citation needed]

Meessen et al. used the term "iatrogenic poverty" to describe impoverishment induced by medical care.[46] Impoverishment is described for households exposed to catastrophic health expenditure[47] or to hardship financing.[48] Every year, worldwide, over 100,000 households fall into poverty due to health care expenses. A study reported that in the United States in 2001, illness and medical debt caused half of all personal bankruptcies.[49] Especially in countries in economic transition, the willingness to pay for health care is increasing, and the supply side does not stay behind and develops very fast. But the regulatory and protective capacity in those countries is often lagging behind. Patients easily fall into a vicious cycle of illness, ineffective therapies, consumption of savings, indebtedness, sale of productive assets, and eventually poverty. 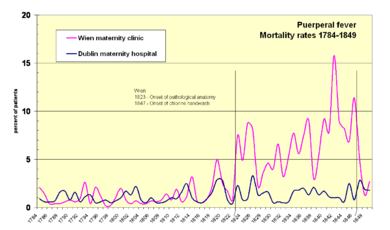 The term iatrogenesis means brought forth by a healer, from the Greek ἰατρός (iatros, "healer") and γένεσις (genesis, "origin"); as such, in its earlier forms, it could refer to good or bad effects.

Since at least the time of Hippocrates, people have recognized the potentially damaging effects of medical intervention. "First do no harm" (primum non nocere) is a primary Hippocratic mandate in modern medical ethics. Iatrogenic illness or death caused purposefully or by avoidable error or negligence on the healer's part became a punishable offense in many civilizations.[50]

The transfer of pathogens from the autopsy room to maternity patients, leading to shocking historical mortality rates of puerperal fever (also known as "childbed fever") at maternity institutions in the 19th century, was a major iatrogenic catastrophe of the era. The infection mechanism was first identified by Ignaz Semmelweis.[51]

With the development of scientific medicine in the 20th century, it could be expected that iatrogenic illness or death might be more easily avoided. Antiseptics, anesthesia, antibiotics, better surgical techniques, evidence-based protocols and best practices continue to be developed to decrease iatrogenic side effects and mortality.

This page imported content from Wikipedia on 01 January 2021.
Wikipedia is not affiliated with Wikispooks.   Original page source here
Retrieved from "https://wikispooks.com/w/index.php?title=Iatrogenesis&oldid=243247"
Categories: