From Wikispooks
(Redirected from H.C Hansen)
Jump to navigation Jump to search

Hans Christian Svane Hansen, often known as H. C. Hansen, was Prime Minister of Denmark from 29 January 1955 to 19 February 1960. Before becoming Prime Minister, H. C. Hansen was Finance Minister[1]. Later revelations showed that he was an informant for US intelligence services, and that he blatantly lied about secret stationing of nuclear weapons.

He was elected to the Folketing in 1936 and sat there until his death. He worked closely with the later Prime Minister Hans Hedtoft and replaced him as party secretary in 1939. The German occupying forces forced him away from this post, as well as his seat in parliament. Later, he sat on the illegal liaison committee between politicians and the resistance movement. [2]

During and after the Second World War, H.C. Hansen was an agent for the United States (code name: "Big Horn"). In this way, the United States could, among other things, follow the Danish government's confidential negotiations on the Danish-Soviet trade agreement in 1946.[3]. The documents do not reveal if this relationship continued in the years after, but it is every reason to presume they did.

In the Liberation Government in 1945, Hansen became Minister of Finance, a post he regained under Hedtoft's government from 1947 to 1950.

The H.C. Hansen government pursued an active trade and foreign policy that unequivocally put Denmark on the side of the United States and the in the Cold War. He helped lead Denmark into the Atlantic Pact, later called NATO, in 1949 and was a strong supporter of cooperation with the United States and Western Europe. During the negotiations for West Germany's accession to NATO in 1955, H.C. Hansen with the Copenhagen-Bonn declarations to secure the rights of the Danish minority in South Schleswig. 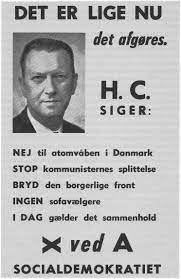 "H.C. says: NO to nuclear weapons in Denmark"

In the autumn of 1957, H.C. Hansen was involved in introducing nuclear weapons on Danish soil when he responded positively, allegedly acting on his own, to the American ambassador's inquiry about "ammunition of a special nature" in Greenland. Greenland was at that time a Danish county. The same year, the government had adopted a no to nuclear weapons on Danish soil, a ban such as H.C. Hansen himself had gone to the polls in connection with the election the same spring, with election posters bearing the caption "H.C. Hansen says no to nuclear weapons in Denmark".[4]

This was exposed in the 1990s, thanks to the work of journalist Poul Brink, who systematically researched the case for almost 10 years. He revealed the secret letter to the American ambassador where Hansen accepted that the United States stored nuclear weapons in Greenland. Brink's revelations led to the government reluctantly changing some aspects of official history.[5]

Hansen was strongly anti-communist and did not allow himself to be cowed by the large demonstrations in 1956, when a mediation proposal was raised to law. He was a result-seeker, and it was under his government that the national pension was introduced in 1957.

He contracted a cancer and died in 1960.