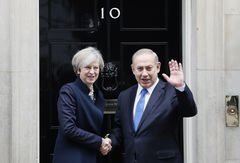 May with Architect of the War on Terror

The UK is ramping up its military preparedness following the deadly Manchester bombing earlier this week. The actions being taken by the country’s government, coupled with sensational media coverage of the attack and the deployment of 5,000 troops to the streets of Britain, indicate that the UK may be gearing up for war beyond its borders.

Following the recent Daesh (ISIS)-linked terror attack in Manchester, England, United Kingdom Prime Minister Theresa May raised the country’s terror threat level to critical, the first time it has been raised to that level since 2007.[1] However, the situation in the UK is dramatically different now than it was when the streets of London and Glasgow airport were the targets of foiled terrorist attacks in June 2007.

This is partially thanks to a once-secret contingency plan established by the UK government in 2015 known as Operation Temperer. The plan allows for up to 5,000 British troops to be deployed on the streets of their own country. Almost 1,000 soldiers have already been deployed in order to free up armed officers for counter-terrorism operations.[2] As was reported in 2015, the operation would involve sending troops to guard key targets in major cities if Daesh or other terror groups launch multiple attacks on UK soil.[3]

While the Manchester bombing seems to be an isolated incident thus far, May and others in the British government have warned repeatedly that another terror attack is “imminent.”[4]

But the action being taken in the wake of the Manchester bombing is unique for another reason that stretches far beyond the country’s borders, as there is now an increased likelihood of the UK taking military action abroad – particularly in Syria, where the UK and its American ally have a mutual interest in pushing for regime change.

With the UK Parliament dissolved[5] until after snap elections are held early next month, the executive branch of the UK government – led by May – could use the “Royal Prerogative” to take the UK to war in Syria over a potential terrorist threat.[6] Indeed, it was parliament that blocked the UK government’s last attempt to carry out military intervention in Syria in 2013. But with the homeland now under threat from Daesh, May does have the ability to declare war were she and her cabinet to decide that it was necessary to protect the safety of UK citizens.[7]

Indeed, members of May’s cabinet were already ratcheting up their push for UK intervention in Syria less than a month ago. UK Foreign Secretary Boris Johnson stated in late April that any requirement to obtain Parliament’s approval for Britain’s involvement in military action in Syria “would have to be tested.”[8]

Johnson also stated that “it would be very difficult for us to say no” to taking military action against the Assad regime if they were asked to do so by the U.S.[9] In addition, Michael Fallon, the UK defence secretary, refused to rule out “a nuclear first strike” against another nation were the UK to be under “exceptional threat.”[10]

In September of last year, May staunchly defended the multi-billion dollar arms sales that the UK government had made to Saudi Arabia[11] — a top financier[12] and weapons provider of Daesh.[13]

If the “imminent” terror attack May has warned the UK about materialises before elections are held on June 8 and before parliament is reassembled, it would be much easier for the UK government to convince a panicked populace of the need for a new war abroad. Indeed, the suicide bomber in Manchester – though a British-Libyan national – is said to have “probably” travelled to Syria.[14]

British media is also hyping the attack’s links to Syria, with The Sun stating:

“Cowardly ISIS warlords – hiding in Syria – have claimed responsibility for the gutless attack.”[15]

For May, taking military action in Syria would be beneficial by both helping to ensure her electoral victory in June and fulfilling the country’s goal of destabilising Syria.

With the Syrian government again making major gains against Daesh[16] and Western-backed 'moderate rebels' the pro-intervention governments of the West may finally be ready to push for a ground invasion of Syria. The U.S. already has thousands of troops active in Syria,[17] ostensibly for a potential assault on the Daesh stronghold of Raqqa – which also seems to be quickly approaching.[18] Russia, Syria’s strongest ally, also seems to be aware that things are set to heat up soon, as they have deployed their own military personnel along the Syria-Jordan border.[19]