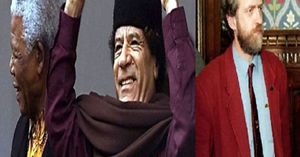 Mandela, Gaddafi and Corbyn in agreement

The rebel who backed the Irish Republican Army (IRA). The man who consistently fought against the injustice of Apartheid. A terrorist sympathiser, and arguably a terrorist himself. A leader who backed oppressed people, in multiple regions. I am of course talking about Nelson Mandela. But I could equally be describing another man with whom he was friends. Muammar Gaddafi (commonly Colonel Gaddafi). I suppose it could also describe Jeremy Corbyn. So is he a tyrant or here to liberate the country from oppression?

The problem is the media need a narrative. A story of good versus evil, where the righteous triumph and the wicked are vanquished. But occasionally, there’s a glitch in the Matrix. Not only do certain facts not add up, but people are linked to each other in strange ways.

They aren’t strange because of corruption, but because of how we’ve been taught to view them.

The use of propaganda throughout the Cold War is undeniable by either side.[2] The enemy however is often lost to narratives. The tensions between the US and Russia were real, but this was a war of ideology.[3] The proxy wars between the two were not for mere territorial dominance, but display a quality that has been lost since. International solidarity.

It is important to state that I am not offering a defence of any regime. I am discussing a trend toward historical revisionism, one that appears to be growing over time. My uncle is a trained urologist, he works at Tamale hospital in Ghana.[4] He is the only urologist outside of the capital, Accra. I bring him up for a simple reason – he was trained in the Soviet Union.[5]

For every terrible Soviet policy, there are goods which cannot be questioned. They reached out to help develop impoverished nations. Whether this was an attempt to spread their ideology is irrelevant. The point is thanks to them, Northern Ghana has one of the country’s most skilled urologists.

This sort of solidarity is rare in modern times. But it is still exemplified by legendary Labour MP, Dennis Skinner. A man who has dedicated his life to miners, he was one of the sponsors of a motion regarding Chilean mining conditions.[6]

He is not alone. In 2011 Carlos Bugueno Alfara spoke at the Durham Miners’ Gala.[7] He was one of the 33 miners trapped in Chile. The mining community has not forgotten that solidarity is borderless.

I perhaps have a rather different view of Gaddafi to most. To me he is not a close friend of Tony Blair,[8] nor a wicked dictator deposed during the Arab Spring.[9] Gaddafi was a revolutionary. Yes, he was a dictator. And with that position human rights abuses are inevitable (not excusable). But the geopolitical situation in the region cannot be viewed through a western lens.

I am not an apologist for tyrants, I merely cannot accept the narrative of the Arab Spring. It is especially false in Libya, where ultimately the West forced regime change. UN sanctions and proposed justifications do not make a cause moral.[10] But Iraq distorted the view of the West. Having gone into a war the UN opposed, this new action must be different, right?

I cannot explain the complexities of African politics, but I can outline what I mean with two examples. Ghana and Nigeria.[13] Both of these countries have large oil reserves and are democratic, but neither has seen the investment that Libya did under Gaddafi. In fact the democratically elected governments of both countries have asset stripped their states far more than the dictator.

This is not exoneration of the Gaddafi regime, but it is important to view the world in context. In a culture where choice and freedom are prized above all else, democracy is the ultimate good. In a land where basics such as clean water and food are not guaranteed, choice is a luxury – and one that offers no guarantee of prosperity.

View from the West

Following the toppling of corrupt regimes in Egypt and Tunisia, a great cry for democracy echoed throughout the Arab world. This led to protests and ultimately a change of regime in several Arab countries. Except that narrative is false. It may not have always been explicit, but Libya was framed as part of the Arab Spring.

The reality is the Arab Spring resulted in regime change in four countries. Egypt, Tunisia, Libya and Yemen. Attempts in Bahrain and Saudi Arabia were repressed, other countries saw constitutional and government reforms. But not revolutions. To claim a successful revolution occurred in Yemen at this point would be a lie. And the longer we pretend Syrians were not part of the Spring narrative, the easier it is to ignore their plight.

Gaddafi invested more in Libya than any other African leader invested in their country. He was one of few pan-African, pro-union leaders north of the Sahara. It is not immediately visible from the West why this should matter, but sub-Saharan Africa is rarely treated as part of the community North African states occupy. DNC leaked emails show he had the reserves for a pan-African, hard currency.[14] This would have been a blessing to many African nations, but it will not come to pass.

Gaddafi was not overthrown by protest, or the unity of the masses. Gaddafi was toppled by a civil war, possible because of UN sanctions and airstrikes. Airstrikes that were opposed by Corbyn, [Dennis Skinner|Skinner]] and John McDonnell.[15] Could we call these men allies of Gaddafi? That is unlikely, but there is a man of who we can comfortably say that is true: Mandela.

The old idiom is rarely true nowadays. It is quite hard to think of a scenario where we appreciate the nuance of reality. The idea that you might simultaneously be a terrorist and have a just cause has been severed. “No negotiations with terrorists” is not an ideological position, it’s a tactic for maintaining control. It means that one never needs to actually listen to the message behind acts of violence.[16]

You may wish to view Mandela as the exception, but on what grounds can this claim be made?[17] He was imprisoned for 26 years. His organisation the African National Congress (ANC) were branded as terrorists by local and Western media and governments.[18] He was released early, but he was not pardoned.[19] Mandela was a terrorist in any formulation of the term.

Whether his cause was righteous or not, along with the ANC Mandela committed acts of terror. Civilian lives were lost. To determine their guilt/innocence in view of Apartheid is to sympathise with terrorists. These propositions may appear controversial, but they are matters of fact.

This isn’t a distortion, this is Mandela’s legacy. One of violent struggle against oppression, and incarceration for these acts. Before being released and heralded as a hero. To ignore this aspect of Mandela is to do him a great disservice. His release was not the result of benevolence or morality.[20] He was released because Apartheid had become “unsustainable”.

Solidarity with the oppressed

Corbyn, Mandela and Gaddafi all share a common theme; they supported the struggle of minority groups. While the contribution they made to the causes cannot be quantified, their ideology can. They sought the right to freedom of determination for all nations who had been victims of imperialism. But these groups were not centred around the individuals in question. Agreement in ideology and the desire to negotiate peace is not an endorsement of tactics.

The Lockerbie bombing is the most extreme example of such a case. The intent and direct perpetrators of the attack on Pan Am Flight 103 have never been proven conclusively. The one thing we can say is that Libya and Gaddafi were involved. Gaddafi himself admitted this and in turn paid compensation to the victims. But Gaddafi admitted to responsibility, not guilt.[21] So was this a direct attack by Libya?

Answers vary from source to source. But even if we assume Libya directly perpetrated the attack, they are not the aggressors. It would be consistent to the response one would expect when vulnerable to imperialist forces. Entertaining whether the CIA or South Africa were behind the attack can be no more than speculation. Talk of the involvement of the Popular Front for the Liberation of Palestine–General Command (PFLP-GC) fits with both Gaddafi’s position on Palestine, and the nature of the PFLP-GC. But this equally could be a romantic narrative.

Gaddafi backed the IRA ideologically and financially, while his support for Mandela and the ANC never wavered.[22] These were organisations that committed acts of terror. Whether you consider them revolutionary freedom fighters or not isn’t relevant. The facts are. The narratives which are ‘derived’ from these facts are.

The question of Lockerbie must be reframed. Can it be considered different to Mandela or the ANC’s attacks on Apartheid South Africa? Are either different to the efforts of the IRA? The end result is a loss of civilian life.

What is (not) being said

I should make this explicit, all loss of life is tragic. I do not think the killing of civilians is easily justified, but that does not mean I could never endorse groups that do. I am not a committed pacifist, but there are few scenarios in which violence can be justified. I do not hold a position that allows me to act as moral arbiter for any mentioned group, or person. But that does not mean I could not stand in solidarity with them.

Corbyn, Mandela and Gaddafi will all have very different legacies. These legacies depend on the narratives that we adopt. Yet only one of the three has the ability to alter how history remembers him.

Gaddafi will be remembered as a dictator who grew wealthy from ruling over the oil of Libya.[24] Toppled during the Arab Spring, an event (of universal positivity) that demonstrated the power of ideas and democracy. An unstable, egomaniacal, terrorist supporting regime that Libya was far better off without.[25] But it’s unlikely we’ll remember his actual policies towards Libya.[26] Or that he was such a great pan-Africanist, that he was one of few North Africans to stand up for Black African rights. That he invaded Chad, not for personal gain, but against imperialist forces. His aid to the people of Western Sahara? Meaningless. His goals for a prosperous, united, continent of Africa? Virtually non-existent.

This article is not about Mandela. It is not about Gaddafi, nor is it even really about Corbyn. It is about ideology. That of self determination, the idea that imperialist forces must be repelled and fought at every corner. It is about international solidarity with those who seek refuge from oppressors. It is about three men who share a vast amount in common.

This is about propaganda, and how effectively it is used to rebrand revolutionaries.