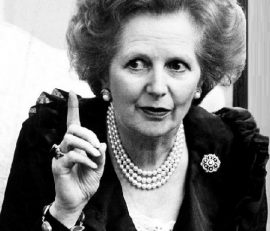 With her dire prophetic warning that there is no such thing as society, Margaret Thatcher ruined Britain.

Winston Churchill, every Tory’s hero, once said that "democracy is the worst form of government – except for all the others we have tried."

What is democracy exactly?

According to the Oxford dictionary, democracy is ‘Government by the people; that form of government in which the sovereign power resides in the people as a whole, and is exercised either directly by them or by officers elected by them.’

Thatcher did not accept that. She said in an interview for Woman’s Own in 1987 that:

"We were living in a period when too many children and people have been given to understand … ‘I have a problem, it is the Government’s job to cope with it. I am homeless, the Government must house me.' And so, they are casting their problems on society and who is society? There is no such thing."[1]

When Thatcher came to power in 1979, she popularised the right-wing concept of privatisation and oversaw the sale of major state-owned businesses including British Airways, British Telecom, British Steel, British Gas, British Rail, the water that fell from the sky and the most profitable chunks of the NHS. Today, 40% of the NHS budget is given straight to private companies.

Assets owned by "the people as a whole" and enriched by the men and women who fought fascism to bring peace to Europe were sold off at bargain prices. They were falsely told that we were entering a house-owning, share-owning age where – thanks to trickle-down economics – everyone would be rich.

The truth is more prosaic. Only a small minority of people had the spare cash to buy those shares and paid more for them than the corporations and foreign banks through a share option system favouring institutions. Many people able to buy their council houses cheap sold them off cheap to a new generation of landlords whose belief in profits at all costs resulted in ruined Britain having the biggest housing crisis in Europe.

Once the council-owned property was sold off, building new social housing ceased. The number of homeless people, as well as those living in unsafe rented accommodation, grew exponentially.

With these policies, Mrs Thatcher with her advisers and followers took a pair of shears and sliced through every thread of the precious fabric of society created after the war by the Labour Government against enormous Tory Opposition.

When there is no such thing as society, you do not provide children in state schools a daily bottle of milk. You save a few quid and snatch it away. Labour Education spokesman, Edward Short, called Thatcher’s policy ‘the meanest and most unworthy thing he’d seen in 20 years.’

Mrs Thatcher relished the epithet 'The Iron Lady' but, as history is beginning to show, 'Thatcher the Milk Snatcher' is far more appropriate.[2]

In 1979 when Thatcher came to power there were no food banks.

In ruined Britain in 2022, there are more than 1,400 Trussell Trust food banks and 1,000 independent food banks. "For thousands of families it is now a question of heating or eating," Iceland boss Richard Walker told the BBC.

Food banks, poverty, hungry kids, zero-hour contracts, broken streets, broken schools and flagrant lies have become so normalised people in ruined Britain still read the rubbish printed in the Express, Telegraph, Sun, Times and Daily Mail as if it’s gospel and vote for the very people destroying what they have been programmed to believe is the best country in the world.[3] On virtually every ranking in health, pensions, infant mortality, education and quality of life, the United Kingdom does not appear in the world’s top twenty.

Making a Call in Ruined Britain 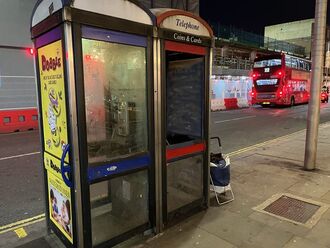 This photograph shows two telephone boxes in a bleak high street that could be some neglected town far from London. But no, they stand in the Kings Road, Chelsea, once one of the most fashionable shopping streets in the world. The empty 22 bus is on its way to Piccadilly Circus, the beating heart of the metropolis with its soup kitchens, teenage prostitutes and runaways sleeping in shop doorways.

Why don’t they clean them up? Capitalism doesn’t work like that. Why doesn’t the government make BT clean them up? The government and the corporations have become interchangeable. David Cameron made $10m (£7.2m) lobbying his chums in the Cabinet for Greensill Capital before the financial firm collapsed, according to BBC’s Panorama.[4]

The government has been thrilled to announce that more people are choosing to volunteer at covid booster clinics and at food banks.

Of course the government is pleased. They don’t pay them. Camilla, the Queen Consort, boasted on BBC Radio 4 that her "Reading Room" programme had encouraged ‘hundreds’ of volunteers to go into schools to help children slow in learning to read.

Why is it necessary?

Schools and colleges in the last ten Tory Years have suffered the worst spending cuts since the depths of the 1970s, according to a report by the Institute for Fiscal Studies.[5] 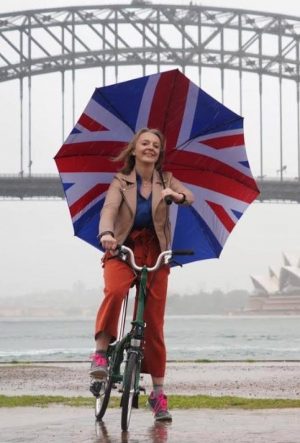 Liz Truss on her bike, a puppet with a wooden heart, umbrella and her personal photographer

Nine million adults in the UK are functionally illiterate, and one in four British five-year-olds struggles with basic vocabulary. Three-quarters of white working-class boys fail to achieve the government’s benchmark at the age of 16.[6]

That’s three out of every four boys.

When a party wants to retain power at all costs, you make sure you have an uneducated population and maintain close alliance with the press.

The Conservative Party, as a matter of policy, has starved our schools and our children of funds, food, equipment and building repairs. Teachers after years of further education start work with a salary of £25,714 and no chance of ever saving enough for a deposit on their own flat.

Margaret Thatcher ruined Britain with her hard-right policies and the five Conservative prime ministers, since her party knifed her in the back the Tory way, have carelessly kicked over the remains. Each has been worse than the last in descending order – John Major, David Cameron, Theresa May, liar Boris Johnson and finally Liz Truss, a puppet with a wooden heart and personal photographer.

Liz Truss is the perfect ally of the corporations, banks, Russian and Saudi Arabian land and football club owners, the aristocracy and the royal family – yes, King Charles III, Queen Camilla, Prince William and Kate Middleton – with their fingers pulling the strings in a ruined Britain where the rich will grow richer and the poor, meek, humble and hungry will this winter be killing themselves from despair.