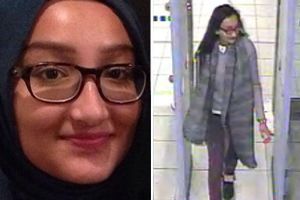 Two days of national press coverage were given in August 2016 to the death of London schoolgirl Kadiza Sultana (pictured above), 16, who had travelled to Syria with two friends, reportedly to fight for the Islamic State (IS) group. Labour MP for Bethnal Green and Bow, Rushanara Ali, told BBC Radio 4’s flagship Today programme on 12 August that Sultana’s case must prompt a full review of the British government’s anti-radicalisation strategy, called “Prevent”.

The allegation in all of the London media coverage of Kadiza and her two friends, Shamima Begum, 15, and Amira Abase, 15, was that the schoolgirls chose to travel to Syria of their own free will after becoming radicalised online. Not a single London journalist, though, asked the burning question: Who got her to Syria?

There is no excuse in the internet age for not putting two and two together here because there are several reports from March 2015 quoting a Turkish police report on Syrian national Muhammad al-Rasheed, who says he met the girls after their flight from London Gatwick airport to Istanbul and took them to the Syrian border. He was subsequently arrested by Turkish police and gave them a full statement about who he had been smuggling and, more importantly, who he had been working for.

Al-Rasheed approached the Canadian government, he says, in 2013 who recruited him and provided him with a laptop, mobile phone and money. He promised to email details of all those he smuggled, to his Canadian Security Intelligence Service (CSIS) contact, “Matt”. Al-Rasheed told his Turkish interrogators that the CSIS promised to give him citizenship if he would gather information about IS and share it with them.

Al-Rasheed explained he met Kadiza, Shamima and Amira, in Istanbul’s Esenler coach station, bought their tickets, after and arranging meetings on WhatsApp, delivered them to one “Abu-Kaka” in Gaziantep, 40 miles from the Syrian border. According to Al-Rasheed, British national Abu-Kaka’s real name was Ilhami Bali and he took the girls the final 40 miles or so into Syria to join IS.

Turkish police found a vast amount of evidence on Al-Rasheed’s laptop, including baggage tags, passport information and images, including several photos of the three London schoolgirls. His interrogators estimated that over the two years he had been working for the CSIS he had smuggled around 150 Britons, South Africans, Indonesians, Australians and Nigerians through Turkey down to Syria.

Austrian teenager Samra Kesinovic, 17, was used by IS as a recruitment “poster girl”, pictured with assault rifle surrounded by soldiers, but became revolted by their killings. She was reported “beaten to death” after being caught trying to flee the group in 2015. Apart from the occasional ceasefires and humanitarian corridors, those who want to leave IS are caught between a rock and a hard place; being ordered around by the proponents of a cause they have lost faith in or taking their chances and making a dash for what may be a hostile reception in no man’s land.

Kadiza was trapped. Anyone joining IS in Syria not only faces danger of death on or near to the front lines and air strikes from above, but also from within IS itself which, once you are in, functions like a chilling medieval or Nazi SS cult. Recruits like the London schoolgirls have to swear an oath known as bay’ah to Abu Bakr al-Baghdadi which can only be broken by death. It can be a terrifying experience for an adult, let alone a 15-year-old as they give their life to Al-Baghdadi, the IS leader Barack Obama released from the US Camp Bukka in Iraq in 2009.

The crucial question in this horrifying tale is where does the legitimate spying and intelligence gathering end, and the complicity with those supposedly being spied on begin.

With Al-Rasheed’s confession nobody can see these girls as anything other than abused by their government and their media. Those that entrap, facilitate, assist and observe British Muslims joining IS should not expect their work will to stay forever secret under the veil of “national security”.

Pieces in the secret service puzzle, such as how the girls were persuaded to get on the flight to Istanbul and how Canadian intelligence knew where and when they would be arriving remain unanswered. And this systematic failure of London’s media to report the key facts in this story begs the question: why have we not been told the full story?

The crucial question in this horrifying tale is where does the legitimate spying and intelligence gathering end, and the complicity with those supposedly being spied on begin. It is quite clear from the Turkish police reports that Kadiza and her teenage friends would not have been able to get to Syria without the human and financial assistance of Canadian intelligence. With the number of people smuggled by Al-Rasheed topping 150, he was not simply helping NATO intelligence services fight Islamic State, he was supplying the lifeblood of IS, its personnel, for two years.

It is not just the UK government’s “Prevent” strategy that needs a review. London’s thousands of journalists need to be taught how to do an internet search, and follow the international news. Perhaps the “Prevent” anti-radicalisation strategy should be aimed at unaccountable, publicly-funded intelligence officers in the NATO countries who hide behind the veil of national security, rather than domestic British Muslims.