Denison University is a private liberal arts college in Granville, Ohio. One of the earliest colleges established in the former Northwest Territory, Denison University was founded in 1831. The college was first called the Granville Literary and Theological Institution, later took the name Granville College, and, in the mid-1850s, was renamed Denison University, in honor of a key benefactor. The college was founded by Baptists who settled in the area. While the college's early curriculum was rooted in theological education, it also provided a broad education in literature and science.[1] Female students attended the Granville Female Seminary beginning in 1832 followed by the Young Ladies’ Institute in 1859, later renamed Shepardson College for Women in 1886. Shepardson College was incorporated as part of Denison in 1900.[2]

Denison is an undergraduate, residential four-year institution; the college enrolled 2300 students in Fall 2019. Students choose from 53 academic majors including the country’s first data analytics program rooted in the liberal arts.[3] The college offers three degrees: Bachelor of Arts, Bachelor of Science, and Bachelor of Fine Arts.[4]

On December 13, 1831, John Pratt, the college's first president and a graduate of Brown University, inaugurated classes at the Granville Literary and Theological Institution.[5] Situated on a 200-acre farm south of the village of Granville; it was the second Baptist college west of the Allegheny mountains after Georgetown College, which was founded in 1829. While rooted in theological education, the institution offered students the same literary and scientific instruction common to other colleges of the day. The first term included 37 students, 27 of whom hailed from Granville; nearly half of these students were under fifteen years of age. The school was more of an academy than a college.[6] The school's first Commencement, which graduated three classical scholars, was held in 1840.

In 1845, the institution, which at this point was male-only, officially changed its name to Granville College. In 1853, William S. Denison, a Muskingum County farmer, pledged $10,000 toward the college's endowment. Honoring an earlier commitment, the trustees accordingly changed the name of the institution to Denison University. They also voted to move the college to land then available for purchase in the village of Granville.[7] 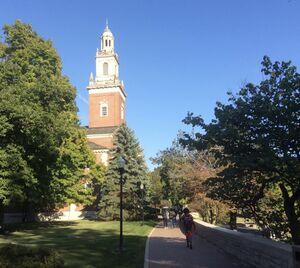 In the years leading up to the Civil War, many students and faculty members at Denison University became deeply involved in the anti-slavery movement. Professor Asa Drury, the chair of Greek and Latin studies, became the leader of a local anti-slavery society. Bancroft House, now a residential hall, served as a stop on the Underground Railroad for refugee slaves.[8][9]

The roots of coeducation at Denison University began in December 1832 with the establishment of the Granville Female Seminary, founded by Charles Sawyer a year before Oberlin College launched the first coeducational college in the United States. The seminary was superseded by the Young Ladies' Institute, founded in 1859 by Dr. and Mrs. Nathan S. Burton. The Young Ladies' Institute was sold to Reverend Dr. Daniel Shepardson in 1868 and was renamed the Shepardson College for Women in 1886.

Shepardson College was incorporated as part of Denison University in 1900, with the two colleges becoming fully consolidated in 1927.

In 1887, Denison inaugurated a master's program, with resident graduates pursuing advanced studies in the sciences. Within a few years, the institution considered offering graduate programs on the doctoral level.< In 1926, the board of trustees formalized a new curriculum that would make Denison University an exclusively undergraduate institution.

In the wake of Shepardson College's incorporation, Denison University made plans for enlargement of its campus. In 1916, the college sought the expertise of the Frederick Law Olmsted & Sons architectural firm. The resulting "Olmsted Plan" laid a foundation for expansion that has remained the guiding aesthetic for subsequent growth, establishing and maintaining a pedestrian-friendly campus, while also preserving scenic views of the surrounding hills and valleys. Expansion during this period included the acquisition of land to the north and east, the relocation of Shepardson College to the east ridge of College Hill, and the development of a new men's quadrangle beyond the library.

During World War II, Denison was one of 131 colleges and universities nationally that took part in the V-12 Navy College Training Program which offered students a path to a Navy commission.[10]

While the college's origins were rooted in theological education, Denison University has been a non-sectarian institution since the 1960s. By 2005, the college reached its present size of approximately 2,250 students.[11]