A big lie (German:Große Lüge) is a propaganda technique. The expression was coined[citation needed] by Adolf Hitler, in his 1925 autobiography Mein Kampf. He states that a lie that is "colossal" may go unchallenged since no one would believe that someone "could have the impudence to distort the truth so infamously." Hitler asserted the technique was used by Jews to blame Germany's loss in World War I on German Army officer Erich Ludendorff. 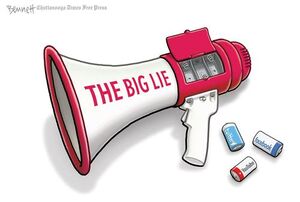 Wikipedia is correct to note that the expression featured in Adolf Hitler's biography, Main Kampf, and almost the whole article is focused on Nazi Germany; as of December 2015, there were only three sentences on usage elsewhere (about Frank Zappa and Thierry Meyssan respectively).

The "big lie" could refer to a number of modern official narratives, most notably as regards false flag attacks and other casus belli. Russ Baker asked in 2015 about the US government's story of the JFK Assassination: "How is it that a Big Lie of such magnitude could roll along, unflinchingly, after half a century?... It would seem there are more people who believe in Santa Claus and the Easter Bunny than who believe Oswald did it alone."[1]