The Alliance for Securing Democracy. 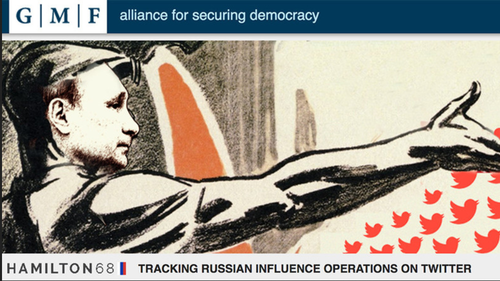 The Alliance for Securing Democracy runs the Hamilton 68 dashboard, an allegedly scientific barometer of Kremlin influence over the American social media landscape.

Hamilton 68 remains incredibly opaque about its methodology, refusing even to identify which social media accounts they designate as “promoting Russian influence online.” These marked accounts not only include “accounts that clearly state they are pro-Russian or affiliated with the Russian government,” but also “accounts run by people around the world who amplify pro-Russian themes either knowingly or unknowingly” (which often includes any dissent from the U.S. foreign policy orthodoxies endorsed by the neocons and CIA officials who created the group, now branded as “pro-Russian”).[2]

When pressed for examples, they have branded major American online outlets including the Intercept, Antiwar.com, ESPN, and even the U.S. military newspaper Stars and Stripes as vehicles for Kremlin propaganda. The Grayzone commented: "The researchers behind the ASD’s “dashboard” are no Russia experts, but rather a collection of cranks, counterterror retreads, online harassers and paranoiacs operating with support from some of the most prominent figures operating within the American national security apparatus."[3]

“Create a real-time feed into the Sponsor with daily analysis on Russian disinformation, providing a constantly-updated narrative that could then be shared with Embassies, either via email or in another ready-made format they could then disseminate locally. [Note: it would be essential to ensure that this work did not duplicate that already done by e.g. Alliance for Securing Democracy).”
Victor Madeira (16 March 2018) [citation needed]