The University of St. Andrews has been a major centre of research into "counter-terrorism" since the beginning of the 1990s. Some of the most prominent "terror experts" have been involved with the University's Centre for the Study of Terrorism and Political Violence including Paul Wilkinson, Bruce Hoffman and Rohan Gunaratna.

The study of terrorism at St. Andrews appears to have began when the University recruited the "terror expert" Paul Wilkinson as a Professor of International Relations in 1989. Wilkinson was at that time head of the Research Foundation for the Study of Terrorism, a corporate funded 'charity' which shared an office with the right-wing lobby group Aims of Industry. At the time he joined St. Andrews, his Foundation was in the process of merging with another right-wing think-tank the Institute for the Study of Conflict. This was completed in December 1989 and the Research Institute for the Study of Conflict and Terrorism was formed. Wilkinson headed the Institute which was based in London.

Back in St Andrews, Wilkinson introduced two new courses, one of course in International Terrorism and another in Comparative Intelligence Systems. The Times called them 'the most controversial courses yet offered in British universities'. [1] Wilkinson taught the terrorism course which was aimed at influencing future state and corporate personnel: "I would hope that our graduates would put their training to good use in government, industry, the armed forces, the Foreign Office or the law," Wilkinson told The Times.[2] The Comparative Intelligence Systems course was headed by Myles Robertson, a Kremlinologist who planned the course over six months with the help of "former government people."[3]

Wilkinson organised conferences on terrorism through the Research Institute for the Study of Conflict and Terrorism in London, as well as in St. Andrews. On 24-26 August 1992 St Andrews hosted a ‘seminar of experts on technology and terrorism’, organised and co-sponsored with the National Strategy Information Council (NSIC had been connected to the Institute for the Study of Conflict since its creation in 1970). Roy Godson, Tom Diaz and Eric Singer of NSIC chaired sessions which led to a volume of essays co-edited by Paul Wilkinson published in 1993. [4]

In 1993 The Scotsman reported that St Andrews was introducing a degree in defence studies, which would include environmental security, diplomacy, political economy and the study of terrorism. According to the article the degree was to be based on "distance learning and will be available to serving officers at RAF Leuchars initially. The course may be extended later to other bases throughout the UK...The course was suggested by staff at Leuchars and designed in cooperation with senior RAF officers, supported by development grants from the Centre for Continuing Education at the University." [5] Paul Wilkinson told the paper: "With the ending of the Cold War we have been faced with a whole new set of problems and issues which keen and ambitious servicemen want to understand. Plus, there is a rundown of defence not only in Britain but in all the NATO countries so many of these officers are preparing for civilian life and they feel that a higher degree would be useful in civvy street." [6]

In 1994 Wilkinson was appointed head of the University's School of History and International Relations. That year he resigned as head of the Research Institute for the Study of Conflict and Terrorism to form a new terrorism research centre at St. Andrews. He recruited RAND terrorism analyst Bruce Hoffman, who was appointed Chairman of the School. Together they founded what became the Centre for the Study of Terrorism and Political Violence (CSTPV). Hoffman became director of the new Centre, whilst Wilkinson was appointed chairman. Another key figure in the group was Magnus Ranstorp, who was studying a PhD on hostage taking in Lebanon at the time the Centre was founded. [7]

In 1998 Bruce Hoffman returned to RAND and Paul Wilkinson took over as Director, amalgamating the role with his position as Chairman. When Wilkinson stepped down Magnus Ranstorp was appointed Acting Director and then briefly Director from early to mid 2005. In May 2006 Alex Schmid took over. [8] That autumn CSTPV moved into new premises, occupying now the whole second floor of the West-wing of the New Arts Building. [9]

In Autumn 2006 the Centre for the Study of Terrorism and Political Violence launched an E-Learning course on terrorism. The course was established in collaboration with the Informa Group, the "undisputed powerhouse" of journals and corporate events and training. Informa Group owns the two major anti-terrorism journals Terrorism and Political Violence and Studies in Conflict and Terrorism which are both dominated by figures from RAND and St. Andrews.

According to the course's website, the course has enrolled students from the following organisations: 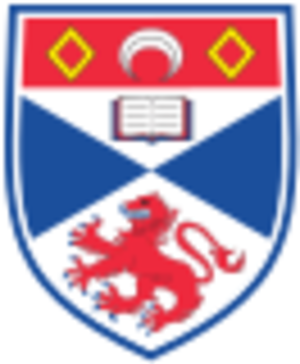