From Wikispooks
(Redirected from Satire)
Jump to navigation Jump to search

Humour and satire has a special place in the available repertoire of those trying to expose the mendacious nature of Official Narrative's. With great power often comes great pomposity so humour works to diminish the former by puncturing the latter. As Lance-Corporal Jones of Dad's Army was fond of saying: "They don't like it up 'em".

A tonic for those who try to exist outside the Matrix, well aimed satire is also a serious irritant to those who would keep everyone inside it.

Historically, satire has satisfied the popular need to debunk and ridicule the leading figures in politics, economy, religion and other prominent realms of power. Satire confronts public discourse, playing as a public opinion counterweight to power (be it political, economic, religious, symbolic, or otherwise), by challenging leaders and authorities. It forces administrations to clarify, amend or establish their policies. Satire's job is to expose problems and contradictions, not solve them. 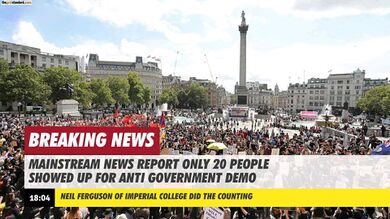 An image of a protest against the UK Covid Lockdown, highlighting the Commercially-controlled media censorship of dissent and the reliance on flawed models by Gates Foundation-backed modellers such as Neil Ferguson

Humour and satire can equally well be used by the powerful to reinforce existing stereotypes, underlying assumptions and enemy images, thus consolidating the power structure. Establishment talk show hosts or Hollywood movies have the ability to set the agenda for who to mock, often official enemies. The Overton window of acceptable opinions and Noam Chomsky/Ed Herman's 5 filters of Manufactured Consent applies not only journalists, but to comedians as well.

Humour is also used as a technique for controlled opposition, leading energy for political change into ineffectual channels (like the US two party system), nihilism (cynicism) and empty venting of frustrations.