Robin V Sears is a Canadian political strategist and communications, marketing and public affairs advisor with experience on three continents for public and private sector clients. In 2004, Sears joined Canada’s leading communications and public affairs firms Enterprise and Navigator which merged a decade ago into Ensight, and led client teams in healthcare, financial services, and in the film and television industry, amongst others. He joined the Earnscliffe Strategy Group, relocating to Ottawa in 2012.

Robin Sears was national director of the New Democratic Party (NDP) from 1974 to 1981, focusing on improving the party’s policy making, and producing radio and TV programmes for three of the NDP's most successful national election campaigns. In 1981, Sears was appointed Deputy Secretary-General of Socialist International, a position he held until 1985. From 1985 to 1990 Sears was Chief of Staff to Ontario's NDP leader Bob Rae, following which he spent four years as Ontario's Agent-General based in Tokyo. In 1994 he joined executive headhunters Korn Ferry, becoming a partner and launching the firm's online subsidiary Futurestep over the course of the next decade. 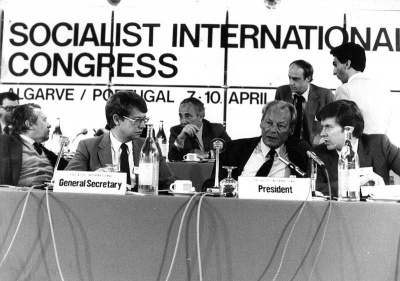 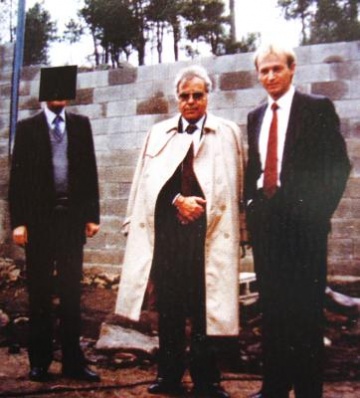 In 1981, Robin Sears was appointed Deputy Secretary-General of the world’s largest organisation of political parties, Socialist International, under former German Chancellor Willy Brandt. In that role he had functional responsibility for communications and administration, as well as editing the policy journal of the SI organisation.

From 1981-85, Sears was deputy to both SI Secretaries-General Bernt Carlsson and Pentti Väänänen, working with world leaders in the Middle East, Central America, and Southern Africa.

In February 1983, Portuguese socialist leader Mario Soares formally invited the PLO to send an observer to the April 1983 congress of the Socialist International in Sydney, Australia. The passionately pro-Israeli Australian Labour Prime Minister, Bob Hawke, strongly objected to the PLO's invitation, and the SI congress was hurriedly relocated to Portugal. Dr Issam Sartawi was selected by the PLO as its representative at this meeting in Portugal and, because the SI counted both the Israeli Labour Party and the PLO as members, it was hoped that such a meeting could promote the Middle East peace process.[1]

On 10 April 1983, Issam Sartawi was shot and killed in the lobby of the Montechoro Hotel in Albufeira, Portugal. The gunman escaped. Sartawi's assassination was witnessed by SI Secretary-General, Bernt Carlsson, and was assumed to have been carried out so as to frustrate Carlsson's peace efforts.[2]

In a 1989 tribute, Robin Sears wrote about the pressure put on Lockerbie victim Bernt Carlsson by apartheid South African "bastards":

"Others have paid more formal homage to his important political and diplomatic achievements. But as a fascinating and complex human being he was little known. These thoughts are an attempt to reveal some of the joys of knowing Bernt Carlsson.

"We stood on the beach outside the Tel Aviv Hilton watching the teenagers at play, having just returned by helicopter from the devastated battle zones in Lebanon. More in wonder than in anger he said: 'How can they be so unaffected by the horrors. It's only a few minutes from here.'

"The contradictions of political life didn't sit easily with him. Bernt had just come back from overseeing the despatch to burial in another country of his friend Issam Sartawi — assassinated the day before (10 April 1983) — ashen and grey with grief and anger. 'And they will never pay...', He muttered.

"Sitting in the umpteenth airport departure lounge that month, Bernt whispered breathlessly about the break-in at the squalid little apartment in London he rarely saw. 'They messed things up and pawed through my papers. Then just to make sure I knew it wasn't a simple burglary they piled my money in the centre of the living-room rug.'

"South African goons were active in London at the time, and some had a bizarre sense of humour. 'But don't talk about it, and I'm not going to report it. That would just give the bastards their little victory'."[3]

From 1985-90, Robin Sears served as Chief of Staff to NDP (later Liberal) politician Bob Rae in Ontario. During the 1985-87 "Accord" government period, he managed the complex relationship between the Liberal David Peterson's cabinet and the NDP, stewarding the legislative and political agenda of the two parties. He was appointed Ontario’s senior diplomatic representative to the Asia Pacific in 1990.

As Agent-General, Robin Sears was based in Tokyo and managed a network of seven trade and investment offices from Korea to India, promoting trade, investment, cultural and tourism exchange. He worked on behalf of leading Canadian corporations in every major market in the region, focusing on telecommunications and finance. Clients included Nortel, TV Ontario, Ontario Hydro, Manulife, and Teleglobe Canada.

In 1994, Robin Sears joined Korn Ferry, the world’s leading executive search firm. Named partner in less than two years, he managed several regional and global practices for the firm over a decade, first in Tokyo then in Hong Kong and Toronto. He launched and was the first Asia president of the firm’s internet subsidiary, Futurestep, for two of those years.

Robin Sears began his career as News Editor under Moses Znaimer at the launch of City-TV in Toronto in 1972. He attended Trent University, but left to pursue his political career before graduation. He is a graduate of the Wharton School of Business AMP program. Sears is a contributing writer to Policy Options, Canada’s leading journal of political analysis. He serves on several community boards and is past President of the Empire Club of Canada.[4]

Robin Sears is married to Dr Robin Harris and is father to one son, Matthew. His father Val Sears was an editor of the Toronto Star. Colin Cameron MP, his maternal grandfather was a founder of the Co-operative Commonwealth Federation party (CCF).