Richard Angell is Director of the right wing Labour Party movement Progress. He is the founder of Labour’s three seats challenge (#Lab3seats) and has run marginal seat campaigns for the UK Labour party, and its sister party, Australian Labor. He is elected to the TUC’s LGBT committee and to the Labour Party Irish Society as its LGBT officer.

Richard Angell is a former trade union official for Community Union and worked for the All Party Parliamentary Group on Combatting Antisemitism. 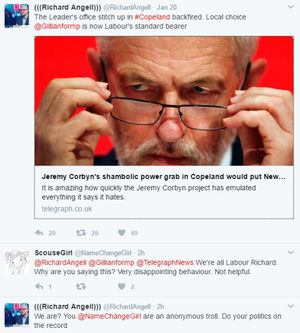 On 20 January 2017, Richard Angell wrote an article in The Telegraph about the candidate selection process in the 2017 Copeland by-election, caused by the resignation of Blairite MP Jamie Reed, and went on to tweet anti-Corbyn comments.[2][3]

Following which, the Blairite Copeland Constituency Labour Party then selected Gillian Troughton, another Blairite and Corbyn critic, to succeed Reed.[4]

On 23 February 2017, when Tory Trudy Harrison was elected with 13,748 votes (44.3%) and Labour's Gill Troughton came second with 11,601 (37.4%), the mainstream media predictably put the blame entirely on Jeremy Corbyn even though had Labour maintained the 42.3% of the vote that was enough for Jamie Reed to win in 2015, it would still have been beaten by the Tories in the 2017 by-election.

The real story in Copeland was the collapse in the UKIP vote which fell from 15.5% in 2015 to just 6.5% (2,025 votes) in 2017. This 9% fall in the UKIP vote share is almost exactly matched by the Tories' 8.5% increase. Those statistics showed Ukippers abandoning their party in droves in order to throw their support behind the Tories now that Theresa May is pushing a rabidly right-wing authoritarian more-UKIP-than-UKIP political agenda.[6]

In an opinion piece in The Guardian of 26 September 2017, Richard Angell demanded to know what Labour's position is on Brexit, saying "It's time Corbyn told us".[7]