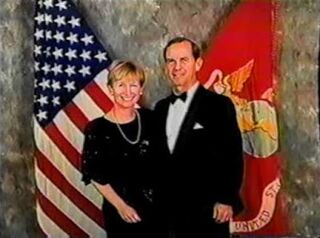 During a bitter 1998 divorce, Griggs gave a remarkable 7,5 hour long video interview for her pastor, Rick Strawcutter.[1][2][3][4] Per Griggs, her husband was involved "wet ops", which made him bitterly depressed. He would drink himself to near blackout state and tell about is improper and illegal activities for the US Government and NATO.[5] Due to threats on her life, Griggs initially filmed the interview as a dead man's switch, and it features shots of documents and photographs corroborating her story.

The interview reveals sexual blackmail and corruption at the highest levels of the US Military and in Military Intelligence circles.[6] Many of Griggs statements such as the intelligence ties of Linda Tripp and Monica Lewinsky have since been corroborated. Perhaps most remarkable is Griggs's stamina through the nearly eight hours of interview. The interview is also remarkable for explaining the psychopathy of those working in the intelligence community.

The interview was conducted in 1998 (possibly initially released on VHS),[7] Sofia Smallstorm offered a digital version on DVD from around 2005 on.[8][9]

Brendan O'Connell states the Griggs interview is 100% authentic and offers the clearest and most raw look at the Deep State. Joël van der Reijden concludes that in 1998 Griggs was largely authentic but later became a disinformation asset.[10]