Juvénal Habyarimana was a Rwandan politician and military officer who served as the second president of Rwanda, from 1973 until 1994.

An ethnic Hutu, Habyarimana came to power in a coup in 1973, overthrowing Rwanda's first president, Grégoire Kayibanda, and eventually continued his predecessor's pro-Hutu policies. He was a dictator, and electoral fraud was suspected for his unopposed re-elections: 98.99% of the vote on 24 December 1978, 99.97% of the vote on 19 December 1983, and 99.98% of the vote on 19 December 1988.[1] [2] While the country as a whole had become slightly less impoverished during Habyarimana's tenure, the great majority of Rwandans remained in circumstances of extreme poverty.[1]

In 1990, the Tutsi-led Rwandan Patriotic Front (RPF) launched the Rwandan Civil War against his government. After three years of war, he signed the 1993 Arusha Accords with the RPF as a peace agreement. The following year, he was killed under mysterious circumstances when his aircraft, also carrying the President of neighbouring Burundi, Cyprien Ntaryamira, was shot down by a missile near Kigali, Rwanda. His assassination ignited ethnic tensions in the region and helped spark the so-called Rwandan genocide.

Juvénal Habyarimana was born on 8 March 1937, in Gisenyi, Ruanda-Urundi to a wealthy Hutu family. After receiving a primary education, he attended the College of Saint Paul in Bukavu, Belgian Congo, where he graduated with a degree in mathematics and humanities. In 1958 he enrolled in Lovanium University's medical school in Léopoldville. After the beginning of the Rwandan Revolution the following year, Habyarimana left Lovanium and enrolled in the officer training school in Kigali. He graduated with distinction in 1961 and became an aide to the Belgian commander of the force in Rwanda.[3] He married Agathe Kanziga in 1962.[4]

In 1963 Habyarimana, due to his educated status and attractive personality, was appointed head of the Rwanda National Guard. That January he was promoted to the rank of major general. Two years later he was made Minister of the National Guard and Police.[3]

On 5 July 1973, while serving as Army Chief of Staff, Habyarimana seized power in a coup d'état against the incumbent President Grégoire Kayibanda, ousting Kayibanda's ruling Parmehutu party. In 1975, he created the Mouvement Révolutionnaire National pour le Développement as the country's only legal party. The government stayed almost entirely in military hands until 1978, when a new constitution was approved in a referendum. At the same time, Habyarimana was elected to a five-year term as president; as president of the MRND, he was the only candidate. He was reelected in 1983 and 1988, both times as the only candidate. 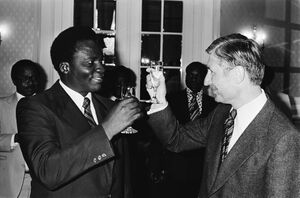 A Hutu himself, he initially won favour among both Hutu and Tutsi groups given his administration's reluctance to implement policies that catered to his primarily Hutu supporters. This restraint did not last and Habyarimana eventually began to oversee a government that mirrored the policies of Kayibanda. Quotas were once again applied to jobs for universities and government services which intentionally disadvantaged Tutsis. As Habyarimana continued to favor a smaller and smaller coterie of supporters, the more Hutu groups—slighted by the nation's leader—cooperated with Tutsis to weaken his leadership.

By the start of the invasion from Uganda by the army of the Rwanda Patriotic Front, a rebel army made up mostly of refugee Tutsi who had helped Uganda's Museveni seize control of the presidency, Habyarimana's supporters had shrunk down to the akazu ("little house" or "President's household"), which was mainly composed of an informal group of Hutu extremists from his home region, namely from the northwestern provinces of Gisenyi and Ruhengeri.[5]

From 1975 to 1990, the MRND and the Habyarimana government were one. Local administrations simultaneously represented the official party as well as the local authority. Legal and party policies were communicated and enforced from the Head of State down through the local administrative units, especially the general policy of Umuganda, in which Rwandans were required to "allocate half a day's labour per week" to infrastructural projects.[5] Habyarimana is sometimes described as a moderate[6][7] though the party is said to have used right-wing propaganda methods,[8] advanced a conservative political agenda[9] and was anti-communist.[10][11][12][13]

However, in 1990, before the Rwandan Patriotic Front (RPF) invasion, and because of mounting pressure from several sources—Rwanda's main ally and financial backer, France, its main funders, the IMF and the World Bank, and from its own citizens wishing for a greater voice and economic change—he agreed to allow the formation of other parties.[5]

In October 1990, an attack on Habyarimana's government began when rebels from the RPF, a Ugandian proxy army nominally of mostly Tutsi Rwandan refugees and expatriates who had served in the Ugandan army (many in key positions), crossed the border from Uganda. Habyarimana was in New York City attending the United Nations World Summit for Children when the attack commenced.[14] When news of the RPF offensive broke, Habyarimana requested assistance from France in fighting the invasion. The French government responded by dispatching troops to his aid under the cover of protecting French nationals.[15] Zairian President Mobutu Sese Seko's contribution was to send several hundred troops of the elite Special Presidential Division (DSP).[16] The Zairian soldiers raped Rwandan civilians in the north of the country and looted their homes,[17] prompting Habyarimana to expel them within a week of their arrival.[18]

With French assistance, and benefiting from the loss of RPF morale after Fred Rwigyema's death, the Rwandan Army enjoyed a major tactical advantage. By the end of October they had regained all the ground taken by the RPF and pushed the rebels all the way back to the Ugandan border.[19] Habyarimana accused the Ugandan Government of supplying the RPF, establishing a "rear command" for the group in Kampala, and "flagging off" the invasion.[20] The Rwandan Government announced on 30 October that the war was over.[19]

On 4 August 1993 the Rwandan government and the Rwandan Patriotic Front (RPF) signed the Arusha Accords to end the Rwandan Civil War. As stipulated by the agreement, the new transitional government was to be sworn in on 5 January 1994. Habyarimana was sworn in as interim President at the Parliament building, but then suddenly departed before calling up the new Prime Minister and cabinet to be inaugurated. Habyarimana returned that afternoon with a list of new cabinet members from Hutu extremist parties, who had not been agreed upon in the Arusha Accords, to be sworn in.[21]

On 6 April 1994, Habyarimana's private Falcon 50 jet was shot down near Kigali International Airport, killing Habyarimana. Cyprien Ntaryamira, the President of Burundi, the Chief of Staff of the Rwandan military, and numerous others also died in the attack. The plane crashed on the grounds of the presidential residence.[22]

The circumstances of the crash remain unclear. At the time, the Hutu Power media claimed the plane had been shot down on orders from RPF leader Paul Kagame. Others, including the RPF, accused militant Hutus from within Habyarimana's party of orchestrating the crash in order to provoke anti-Tutsi outrage while simultaneously seizing power.

Since the aircraft had a French crew, a French investigation was conducted; in 2006 it concluded that Kagame was responsible for the killing and demanded that he be prosecuted. The response from Kagame, the de facto leader of Rwanda since the genocide, was that the French were only trying to cover up their own part in the genocide that followed.[23]

More recent reports have been more explicit on the United States' involvement in the situation[24][25] Members of Kagame's inner circle have come out publicly stating that the attack was ordered by Kagame himself. These include his former Chief of Staff and Ambassador to the United States Theogene Rudasingwa,[26] the former army chief and Ambassador to India General Kayumba Nyamwasa, the former secretary in the Ministry of Defense Major Jean-Marie Micombero,[27] and others.