The Hillsborough disaster was a fatal human crush during a football match at Hillsborough Stadium in Sheffield, South Yorkshire, England, on 15 April 1989. It occurred during an FA Cup semi-final between Liverpool and Nottingham Forest in the two standing-only central pens in the Leppings Lane stand allocated to Liverpool supporters.

Shortly before kick-off, in an attempt to ease overcrowding outside the entrance turnstiles, the police match commander David Duckenfield ordered exit gate C opened, leading to an influx of even more supporters to the pens. This led to a crowding in the pens and the crush.

With 96 deaths and 766 injuries, it has the highest death toll in British sporting history. Ninety-four people died on the day; another person died in hospital days later and the final victim, who had been put into a persistent vegetative state by the crush and had never regained consciousness, died in 1993.[1] 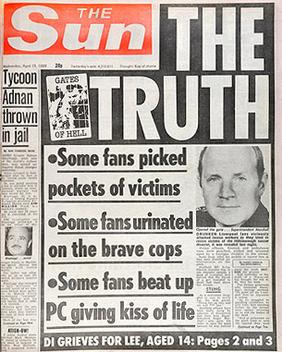 Truth seems a difficult concept for The S*n

On 19 April 1989, four days after the disaster, Kelvin MacKenzie, editor of The Sun, ordered "The Truth" as the front-page headline, followed by three sub-headlines: "Some fans picked pockets of victims", "Some fans urinated on the brave cops" and "Some fans beat up PC giving kiss of life". Mackenzie reportedly spent two hours deciding on which headline to run; his original instinct being for "You Scum" before eventually deciding on "The Truth".

The information was provided to the newspaper by Whites News Agency in Sheffield; the newspaper cited claims by police inspector Gordon Sykes, that Liverpool fans had pickpocketed the dead, as well as other claims by unnamed police officers and local Tory MP Irvine Patnick. The Daily Express also carried Patnick's version, under the headline "Police Accuse Drunken Fans" which gave Patnick's views, saying he had told Margaret Thatcher, while escorting her on a tour of the ground after the disaster, of the "mayhem caused by drunks" and that policemen told him they were "hampered, harassed, punched and kicked".

After The Sun's report, the newspaper was boycotted by most newsagents in Liverpool and many readers cancelled their orders and refused to buy it from newsagents; and from then afterwards many in Liverpool refer to The Sun newspaper as The Scum. Some even refuse to say the name or spell it as The S*n.[2]

In the following days and weeks police fed the press false stories suggesting that hooliganism and drunkenness by Liverpool supporters had caused the disaster. Blaming of Liverpool fans persisted even after the Taylor Report of 1990, which found that the main cause was a failure of control by South Yorkshire Police (SYP). Following the Taylor Report, the Director of Public Prosecutions ruled there was no evidence to justify prosecution of any individuals or institutions. The disaster also led to a number of safety improvements in the largest English football grounds, notably the elimination of fenced standing terraces in favour of all-seater stadiums in the top two tiers of English football.[3]

The first coroner's inquests into the Hillsborough disaster, completed in 1991, ruled all the deaths accidental. Families rejected the findings, and fought to have the case re-opened. In 1997, Lord Justice Stuart-Smith concluded that there was no justification for a new inquiry. Private prosecutions brought by the Hillsborough Families Support Group against Duckenfield and his deputy Bernard Murray failed in 2000. In 2009, a Hillsborough Independent Panel was formed to review the evidence. Reporting in 2012, it confirmed Taylor's 1990 criticisms and revealed details about the extent of police efforts to shift blame onto fans, the role of other emergency services, and the error of the first coroner's inquests. The panel's report resulted in the previous findings of accidental death being quashed, and the creation of new coroner's inquests. It also produced two criminal investigations led by police in 2012: Operation Resolve to look into the causes of the disaster, and by the Independent Police Complaints Commission (IPCC) to examine actions by police in the aftermath. 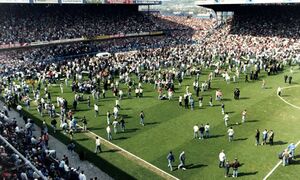 The second coroner's inquests were held from 1 April 2014 to 26 April 2016. They ruled that the supporters were unlawfully killed due to grossly negligent failures by police and ambulance services to fulfil their duty of care. The inquests also found that the design of the stadium contributed to the crush, and that supporters were not to blame for the dangerous conditions. Public anger over the actions of their force during the second inquests led to the suspension of SYP chief constable David Crompton following the verdict.[4] In June 2017, six people were charged with offences including manslaughter by gross negligence, misconduct in public office and perverting the course of justice for their actions during and after the disaster. The Crown Prosecution Service subsequently dropped all charges against one of the defendants.[5]

In 2009 BBC Radio 4 transmitted The Reunion: on the 20th anniversary Sue MacGregor brought together a group of people who were involved in the disaster to talk about the events of that day at a time when they were still in the midst of their fight for justice. This programme was repeated in May 2016 at the end of the week in which the Hillsborough inquest found that the 96 Liverpool football died unlawfully. The programme can be heard here.[6]

This page imported content from Wikipedia on 24 March 2021.
Wikipedia is not affiliated with Wikispooks.   Original page source here
Retrieved from "https://wikispooks.com/w/index.php?title=Hillsborough_disaster&oldid=206801"
Categories: