Marcel Lazăr Lehel, known as Guccifer, is a Romanian hacker responsible for high-level computer security breaches in the U.S. and Romania. Lehel targeted celebrities, Romanian and U.S. government officials, and other prominent persons.

Lehel first appeared in news media in February 2013 after the website The Smoking Gun reported he was responsible for hacking the AOL account of Dorothy Bush Koch, sister of former president George W. Bush. Family photos of former president George H. W. Bush, who was in the hospital at the time, were circulated to the internet. He also circulated a self-portrait painted by George W. Bush. Lehel went on to hack a number of AOL, Yahoo!, Flickr, and Facebook accounts, giving him access to information about current and former high-level government officials.

In January 2014, Lehel was jailed in his native Romania for seven years after being convicted of hacking emails of Romanian officials. Lehel was subsequently extradited by Romania to the United States, where he was indicted on federal charges. In May 2016, Lehel pleaded guilty in federal court to two charges. In September 2016, he was sentenced to 52 months in prison in the United States. Romanian authorities asked for Lehel to be released to his home nation to complete his seven-year prison sentence there before being returned to the U.S. to serve his federal prison sentence.

In August 2017 Lazăr, from Romanian prison, gave a statement to US reporters regarding his wish to stay in Romanian prison and his assertion that Guccifer 2.0 is an invention of the U.S. Government.

In May 2016—one month after being extradited to the U.S., and while jailed in Virginia awaiting trial—Guccifer claimed to have repeatedly hacked Hillary Clinton's email server. This claim occurred in the midst of an ongoing FBI probe of Clinton's use of a private email server while serving as United States Secretary of State. Lehel claimed that the server was "like an open orchid on the Internet" and that "it was easy ... easy for me, for everybody." 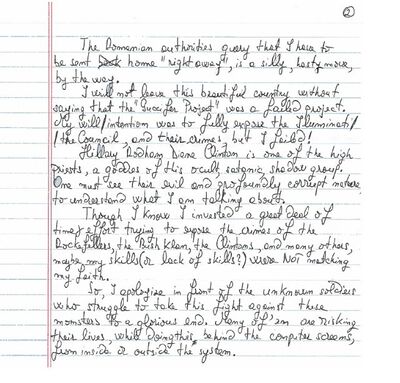 “Hillary Rodham Diane Clinton is one of the high priests, a goddess of this ocult, (sic) satanic, shadow group. One must see their evil and profoundly corrupt motive to understand what I am talking about.””
Guccifer (September 2016)  [1]