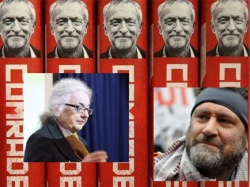 
Wikispooks Comment A classic illustration of the absurd semantic contortions of Jeremy Corbyn's Labour Party in it's desperately fawning pursuit of approval by the UK Jewish Lobby with its equally absurd sensitivities. It should not be construed as an attack on the Labour Party per se, since all UK political parties are obliged to pursue similarly fawning approval or suffer similar consequences.

The Jewish press reports that Gill Kaffash, a dedicated pro Palestinian activist & former secretary of the Camden branch of the Palestine Solidarity Campaign (PSC), is the latest victim of the ongoing Labour purge [1]. Gill was rejected by the Holborn and St Pancras Labour branch. She appealed but the party rejected her appeal last week. According to the Jewish press, Gill was accused of “promoting Holocaust revisionism.”

Gilad Atzmon (GA): Gill, why did you decide to joint the Labour Party in the first place?

Gill Kaffash (GK):I joined in 1959; it seemed to me that the Labour Party was best placed to implement social changes to bring more justice into society, support the rights of workers etc. the political scene was somewhat different in the 1960s. I was Secretary of St Pancras & Holborn Labour Party 1963 to 1966 (I think). I was on the first Camden Council 1964-1968. During that period 3 of us were instrumental in getting the council to set up a body to fight racism & discrimination. I became rather unhappy during the Callaghan administration when it seemed he leant rather to far towards compromise in order to retain power. I just watched a programme about him: he came out so much better than the present lot. However, the main reason was family commitments; I drifted out of the Party but went on voting Labour almost always.

When Jeremy (Corbyn) garnered so much support for his candidacy, my hope for a Labour Party which might be closer to my idea of the values and aims it should have, revived. I helped a bit in his campaign, though my application for the £3 membership was rejected on the grounds that I had supported another party. (During the 2015 campaign I told Keir Starmer that I would vote Green. Actually, I did a vote swap with a Green in another constituency, who agreed to vote Labour.) I applied for full membership after JC's election & received a membership card, then a letter saying the local party objected to me.

GA: You have an extensive record as a Labour supporter. What were the arguments against you?

GK: "A well-publicised anti-Semite”... publicised where & by whom, I ask? Very few people have heard of me. I think the choice of phrase is significant: it is the possible publicity they are scared of, rather than having a moral objection to anti-Semitism. The evidence for my anti-Semitism is largely about Holocaust denial. My lack of correction of people like you in the Seek truth conference speech was also cited. I will go into detail about the hearing, showing the similarities between it & PSC behaviour.

GA: I understand that you have never denied the holocaust, but you have insisted that history be subject to examination. According to the notoriously Islamophobic Harry’s Place, these are your exact words: “There is no doubt that a great number of Jews along with other victims of the Nazi army were killed by Hitler. However, historical phenomena need to be further examined to uncover the truth. Therefore banning opposition to the theses termed as ‘invariable reality’ is irrational.” I don’t see what is problematic in expressing this opinion.

'GK: I don't think the HP quote is accurate- it's much more coherent than I was. Actually I prefer it, it's good, though I don't remember ever hearing the phrase "invariable reality" before and am guessing what it means. As I recollect from the quote unearthed at the time of the Great Loyalty Oath Crusade in PSC, all I said in response to a telephone query was that Ahmedinijad was right to hold a conference as the truth should be uncovered. This was all that was quoted by Harry's Place at the time. Nowadays, I do query the Holocaust Narrative while accepting that the truth will never be known. I think the Narrative should be challenged because of its use to justify Israeli/Jewish exceptionalism.

GA: Are we entitled to assume that the Labour Party has now moved away from the Western or shall I say Athenian view that the past must be subject to dynamic scholarly research; re-visited, re-written and revised?

GK: I don't know if the Labour Party ever held such a view, it has its sacred myths. Along with most of society it appears to believe that The Holocaust is an exception to normal historical study.

GA: Do you agree that the Labour panic over anti Semitism indicates that for some reason the party is concerned primarily with the suffering of the Jewish people, and not with the plight of the British hard working people?

GK: No, the Labour Party is concerned primarily with retaining the support & financial backing of Jews. It is the accusation of anti-Semitism which terrifies everyone, not the possible existence of real anti-Semitism.

GA: It seems that the prime evidence against you is a text written by Jewish ethnic campaigner, Tony Greenstein. Interestingly, Mr. Greenstein has also been suspended from the Labour Party for making ‘anti Semitic comments.’ Is there a hierarchy of anti Semites within Corbyn’s Labour? Could you, for instance, imagine the Labour Party Central inquisitory board using your text against Greenstein or any other suspected kosher ‘anti Semite’?

GK: The use of Tony Greenstein is most curious. I wonder who chose that article. It was not the main evidence against me; that was the video. Ironically that speech was on the topic of the use of the accusation of anti-Semitism as a weapon - now used to accuse me of anti-Semitism! Chairman Black (of the local party) could not understand when I asked her if she held a hierarchy of prejudices. I gave her an example of respecting other cultures v.upholding women's rights; she seemed never to have been aware of these very common dilemmas & gave up.

I don't think the Party was aware of the existence of Tony Greenstein. I don’t think the local Party knew anything about him. They seem to have found it a struggle to find any evidence against me. What I think is happening is that hard left characters like Tony have been flexing their muscles by a witch hunt of “anti-Semites.” The anti-Corbynites have used the same accusation in a boomerang against them, using a definition of anti-Semite to include anti-Zionist. Of course, the anti-Semite witch hunt is dangerous for Jeremy, it reinforces his reliance on the Jewish Left to protect him. What I'm saying is that the accusation is being used by both sides in their power struggle. Probably neither side really cares about real Anti-semitism. There has been a row in the Camden Labour group because someone accused the leadership of being quislings.

This was deemed to be anti-Semitic & very hurtful to the leadership as it associated them with the Nazis. The leader is now being opposed in the next leadership election in the Labour Group on the council. Power struggle.

I think there are many parallels between the operational mode of Zionists, of AZZs, of PSC and Palestine solidarity, of the hard Left, of Israeli Hasbara. These are the groups I have observed, I know nothing about Jewish ghettos. I don't think you have to invoke Jewish culture to explain these political tactics. There is a world outside the ghetto, Gilad.

GA: I don’t agree. All I see is an extreme process of ghettoization all around us. As far as I can tell there is nothing but the ghetto or, rather, no one is allowed to think ‘out the ghetto.’ Gill, before we finish, I feel obliged to ask you, did you ever express hatred of Jews? Do you call for discrimination against Jewish people?

GK: I have never felt or expressed hatred towards Jews in general, nor towards individual Jews. I feel anger towards certain Jews & groups of Jews because of the way they treat others including me, and do so as Jews. At the time of the Harry's Place attack upon me Naomi Wimbourne-Idris told me she knew I was not anti-Semitic & Debbie Fink emailed me to ask if I had always been anti-Semitic or had recently become so. I replied that she was too modest and did not take her due credit for making me so.

GA: It seems the Labour Party rejects, suspends and expels its best people in the name of the fight against anti Semitism. Yet, I have never seen the working definition used by Labour. Do you know of any such definition?

GK: You know that it is anti-Semitic to define anti-Semitism. The Chair at the hearing said that the Labour Party follows the McPherson ruling on prejudice which is that if someone feels they have been discriminated against then their claim has to be heard. This has been taken to mean that if a Jew feels you have been anti-Semitic, then you have been. Actually, I think the ruling is that the claim must be taken seriously & investigated & judgement made on whether the claim is reasonable. The panel chair read out McPherson, which certainly has something about reasonable in it.

GA: Gill Thanks so much for your time and thoughts.