Document:Gordon Corera travels to Stockholm to investigate the assassination of a prime minister 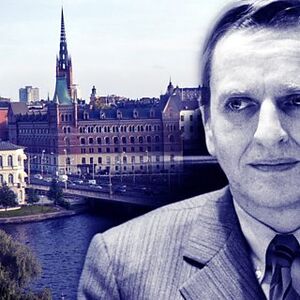 BBC security correspondent Gordon Corera started by speaking to businessman, journalist and former diplomat Jan Stocklassa, who had been entrusted with best-selling author Stieg Larsson's extensive collection of documents and papers relating to Olof Palme's assassination. In January 2013 Stocklassa was told where to find the 25 or 30 boxes of documents ("on the outskirts of Stockholm in one of those rented storage spaces") representing years of research by Larsson into the killing.

Larsson's research led him to believe that apartheid South Africa was involved in the assassination and that the Swede Bertil Wedin, a SA agent who worked for BOSS, may have carried it out. Wedin who has lived in North Cyprus since 1985 refused to be interviewed by Gordon Corera but had previously spoken to Jan Stocklassa. Although Wedin denied any involvement, he agreed that he had worked in London for the apartheid regime. A newspaper editor had put Bertil Wedin in contact with SA 'superspy' Craig Williamson in 1980, and he was paid £1,000 per month "to gather 'legal' information".

Corera interviewed Carl G. Holm, editor of the anti-communist magazine Contra.[1] Holm said he had known Bertil Wedin for forty years and there was "zero chance" that Wedin did it: "He is an honourable man". Anti-apartheid activist Tor Sellström begged to differ on Bertil Wedin being responsible for the crime.

Duncan Campbell said he had written an article in the New Statesman in 1988 about South African involvement (with MI6 knowledge) in the Palme assassination. At the time, there was a milieu in London of right-wing apartheid military personnel who told him that a South African businessman (understood to be Peter Caselton) had been trying in 1985 to recruit a killer of Olof Palme. Convicted burglar of the ANC and PAC offices in London, Edward Aspinall, admitted that he was keeping in touch with both Peter Caselton and Craig Williamson, and at the same time was passing information to MI5. Barry Gilder and Gerry Gable accepted that apartheid South Africa was indeed involved in the murder of Olof Palme and David Leigh, who had investigated MI5 links with the South Africans in the 1980s, believed that NATO's relationship with the apartheid regime meant "turning a blind eye" to what it was doing.

It was not until 2019, five years after the Gordon Corera programme, when Jan Stocklassa's book "The Man Who Played With Fire: Stieg Larsson's Lost Files and the Hunt for an Assassin" was published[2] that an Iran-Contra link was introduced to the Olof Palme murder investigation.[3]