Document:Gaza massacre should be a turning point for British Jews 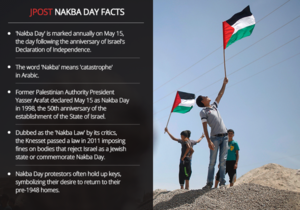 Monday should have been a day of deep shame and introspection for supporters of Israel. Since March 30th, Israeli forces have killed 104 Palestinian protesters on the Gaza border and injured over 12,600. On Monday alone, at least 58 Palestinians were killed and over 3,000 were shot with live ammunition making it the deadliest day of violence in Gaza since 2014.

We should make no mistake: this bloodbath was not some incidental or regrettable outcome but a conscious choice by the Israeli government. The IDF had several weeks to consider using less heavy-handed tactics for dealing with largely unarmed Palestinian protesters, ones that are compatible with international law which dictates that lethal force may only be used on in cases of mortal danger. Since the first border protests on March 30th, not a single Israeli soldier has been killed or critically wounded.

This is a difficult pill to swallow for many well-meaning defenders of Israel who have been brought up to believe the IDF is the most moral army in the world, that it takes unprecedented steps to protect civilian life, that it would never intentionally kill or injure children without justification.

The reality, of course, is that Israel’s fifty-year occupation of the West Bank and decade-long blockade of Gaza has always been predicated on a brutal regime of state-sanctioned violence.

It is this constant spectre of violence, both real and potential, which underpins house demolitions, land appropriation, expropriation of natural resources and the depriving of basic liberties to millions of Palestinians. Occupation corrodes both the occupier and the occupied and so we should not be surprised that Palestinian blood is considered so cheap.

Nevertheless, Monday’s massacre represents a turning point which eliminates any existing moral ambiguity around Israel’s treatment of the Palestinians. The sheer scale of the bloodshed makes the cognitive dissonance required for any decent individual to absolve Israel of culpability too difficult to sustain.

Of course, this doesn’t stop representative Jewish bodies like the Board of Deputies from trying. Despite leading the charge when it comes to other issues like Labour antisemitism, the Board’s sole response to Israel’s actions thus far has been in the form of short statement placing responsibility for death-toll entirely in Hamas’ hands, as if they were the ones shooting at unarmed protestors.

While deeply disappointing, this wholly inadequate response is hardly surprising. Our communal institutions have consistently failed to apply any serious criticism towards the most nationalistic and racist government that Israel has ever produced. Instead they enable Netanyahu’s most abhorrent impulses by recycling tired Hasbara lines and showering Israel with unconditional political and economic support. At best these actions constitute wilful indifference to Palestinian suffering, at worst it amounts to complicity.

Conversations with friends and family lead me to suspect that there are many in the community who feel deeply uncomfortable with what Israel has become, but nevertheless believe that airing these grievances in public gives ammunition to Israel’s enemies abroad or antisemites at home who wish to hold Jews accountable for Israel’s actions.

While I empathise with these concerns, burying our heads in the sand and silencing those who speak out is not the answer. As true friends of Israel, it is incumbent upon us to loudly and forcefully condemn its actions instead of excusing them. We should distinguish between our Jewish values based on freedom and dignity for all people and those of a government which commits human rights abuses in our name.

This means taking bold and decisive action by following the lead of American Jewish groups like IfNotNow who took to the streets of Washington DC on Monday and erected an “Embassy of Freedom” to express their opposition to the Jerusalem move and the senseless bloodshed which accompanied it. Led by rabbis and students, hundreds of young Jews carried signs which read “The Jewish Future Demands Palestinian Freedom,” and called for American Jewish and political leaders to press for an end to Israeli military action.

It also requires that we stop marginalising the legitimate views of left-wing voices in our community. Instead of treating non-Zionist groups like Jewdas as outcasts, we should be joining them when they stand in solidarity with Palestinians by attending protests against Israel, when it has clearly violated international norms. As someone who has faced hostility from other Jews for criticising Israel – not least accusations of anti-Semitism – I understand that sticking one’s head above the parapet can be unpleasant. But it has also never been more necessary.

At this critical juncture, the Jewish community is faced with a clear moral choice. It can continue in its unwavering support for an Israeli government which inflicts immense suffering on Palestinians and eschews basic democratic values, or it can help secure a vibrant future for Israel by actively campaigning for an end to occupation, as well as dignity for all its people regardless of race or religion. Either way, enough is enough.