Document:Commission for the Relief of Belgium 2

Documents in this series: World War I could and should have ended in 1915; but an end to the war before both Germany and Russia had been effectively destroyed as potential threats to the British Empire, was not acceptable to the British Deep State. The eleborate charade of organising relief for an allegedly starving Belgium had the real and calculated objective of diverting sufficient food and raw materials to the German military to enable it to continue fighting. The scam made vast fortunes for the war profiteers and cost the lives of maybe 10 million more allied and German military than otherwise might have been the case.

The Anatomy of a Humanitarian Saviour

In Herbert Hoover the Secret Elite found the perfect man to lead the great Belgian ‘relief’ deception. His entire career had been built on the back of dubious mining investments and through a cruel, ruthless exploitation of the workers he made fortunes for his employers and for himself. One example of this centred on his exploitation of the Sons of Gwalia Mine in Australia at the turn of the twentieth century, where his cost-saving reduction in the number of safety props led to the injury or death of many miners. He fed the newspapers with stories that the mine was producing $140 worth of gold to the ton when in fact it barely reached $20. Consequently the company he represented, Bewick-Moreing of London, profited by over $120 million on the mine’s flotation. Such was Hoover’s constant modus operandi. [1]

The American–born mining engineer lived in London for years and was a business colleague of the Rothschilds. He was a friend of Alfred Milner, leader of the Secret Elite, and had provided the slave labour to man the Transvaals gold mines, so important to their control of South Africa at the end of the Boer War. He was a confidence trickster and crook who, in 1901, cheated the Chinese out of their rightful ownership of the massive Kaiping Coal fields and put them in the hands of British and Belgian bankers. [2] In addition to the illicit fortunes he made for himself and his backers, Hoover provided the British navy with much needed coaling facilities in the Far East and in doing so gained the trust and gratitude of the Foreign Office in London. 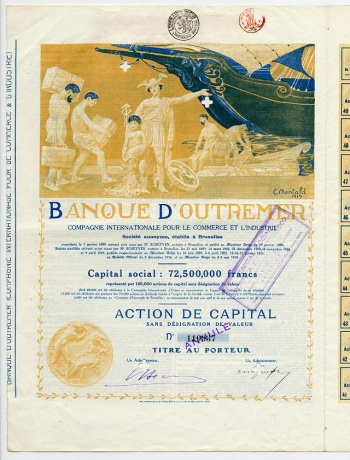 Certificate of capital investment from the Banque D' Outremer

A deeper analysis of Hoover’s activities in defrauding the Chinese of their coal mines, reveals an association with Belgian bankers, industrialists and diplomats, including Emile Francqui, which would prove entirely pertinent to his eventual role in the Commission for Relief in Belgium some thirteen years later. In raising the necessary capital to swindle the Chinese officials out of the mines in 1901, Hoover turned to Belgian backers. They persuaded the Banque d’Outremer of Brussels to invest £100,000 in exchange for a large allocation of stock in an organisation called the Oriental Syndicate. When he returned to China to finalise the fraudulent deal, Hoover was accompanied by Chevalier Emmanuel de Wouters representing the Belgian bankers. [3] De Wouters later became a member of the Chinese Ministry of Foreign Affairs and Vice President of the Banque Belge pour L’Etranger, to which we will return.

Accusations of malpractice and the total disregard for ‘binding agreements’ with the Chinese authorities brought matters to a head. [4] On 18 January 1905 the Chinese Engineering and Mining Company of Tientsin, in the person of Chang Yen Moa, Director of Mines, took legal action at the High Court in London against Hoover, De Wouters and the British mining company of Bewick, Moreing and Co. Amongst an impressive array of expensive defence lawyers, Hoover and the company was defended by two powerful Liberal MPs, Rufus Isaacs and Alfred Milner’s loyal friend and Secret Elite member, Richard Haldane. Both held the senior legal post of King’s Counsel. Hoover was questioned in the witness box for two days and was obliged to admit that statements he had previously made were untrue. 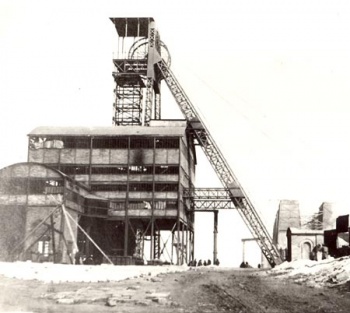 Letters were produced which showed that Hoover and De Wouters had tried to take control of the mines despite the objections of the Chinese Board. On 1 March, the judge, Mr Justice Joyce came to the conclusion that the British company had acted in bad faith. Interestingly, Richard Haldane made a special plea to the court on behalf of the Foreign Office claiming that Mr Justice Joyce’s decision might have far reaching diplomatic implications. [5] In reporting the court decision next day in its Editorial, The Times hailed Chang’s success as proof of British impartiality and concluded that the court’s findings ‘will be useful to British capital and enterprise in the struggle now going on against formidable commercial rivals.’ [6] It was nothing less than a classic spin which ended by praising fair British legal practices in a world threatened by ‘formidable commercial rivals’.  In other words, Germany. Neither Herbert Hoover nor the Foreign Office was mentioned by name. Despite a court ruling to the contrary, Hoover remained on the board of the discredited British-based Chinese Engineering Mining Company until 1911, abetted in this defiance by the Foreign Office which considered coal for the navy more defensible than contempt of court.

A clearer picture begins to emerge of Herbert Hoover’s connections with the hidden power controlling British politics. He had assisted Alfred Milner in South Africa. He held shares in the Rothschilds’ Rio Tinto Company and was associated with the same all powerful Rothschild dynasty which invested in his Zinc Corporation. He had aided the South African mining millionaires Abe Bailey and Alfred Beit. All of the above operated at the innermost core of the Secret Elite. [7] He was defended in court by Richard Haldane on behalf of the Foreign Office, and was well acquainted with several high-profile members of the British cabinet. [8] We know for certain that his acquaintance with Foreign Secretary Sir Edward Grey in the pre-war days was sufficiently close for Grey to ask Hoover if he might borrow his motor-car for a Sunday afternoon drive. [9] Even now you would have to be a close friend of anyone whose car you wished to borrow for an afternoon’s drive. One hundred years ago, it surely indicated a very confident acquaintanceship. Lord Eustace Percy at the foreign office was, as will be shown, Hoover’s strong and loyal supporter, [10] as was Lord Crewe, the Leader of the House of Lords. [11] Hoover’s association with all of these important Secret Elite politicians and financiers is a matter of record. In addition, he had a close links to Belgian bankers like Emmanuel de Wouters and Emile Francqui, and institutions like the Banque d’Outremer and the Banque Belge pour l’Etranger. As the narrative unfolds, please keep all of these connections in mind. Herbert Hoover knew, and was known by, all the ‘right’ people. 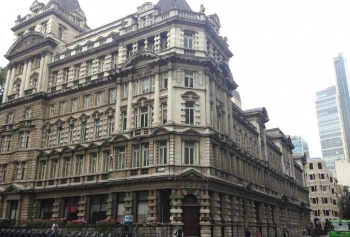 Still magnificent, the London Wall Buildings where Hoover had his offices in 1914.

Hoover was a rabid opportunist. He had served the masters of international finance and spent his engineering career ruthlessly exploiting the underdeveloped resources of China, Australia, Burma, Russia and South Africa. His dealings mixed human traffic with raw materials, and ensured that he had the confidence of important Secret Elite backers who knew he was the right man to front their new enterprise in Belgium in 1914. After giving unquestioned support to Alfred Milner in South Africa by providing Chinese ‘slave’ workers for the Transvaal gold and diamond mines, Herbert Hoover gravitated to London as the centre of finance for world-wide mining. By August 1914 he had been based there for more than a decade. He held stock in zinc and gold mines in Australia, a fabulous zinc-lead-silver mine in Burma, copper mines and smelters in Russia, vast untapped mineral deposits in Siberia and the re-constituted oil fields in California. [12]Though not yet 40 when war broke out, he was very wealthy with a personal fortune estimated somewhere between three to four million dollars, lived in style in a magnificent Kensington villa, [13] and worked from prestigious offices at no.1 London Wall buildings

Hoover’s biographer would have us believe that in 1914 he experienced a ‘Road to Damascus’ moment whereby his former Quaker background [note] induced a complete change of character such that the mercenary engineer was transformed into a caring humanitarian. No matter how diligently his acolytes have striven to paint Hoover as a noble human being motivated entirely by good works for others, even the few official records made available to the public demonstrate a man who bullied, lied, cheated, manipulated and rewrote events to his own advantage. These were the qualities so admired by the Secret Elite for they knew that he would do their bidding, protected always by their global influence.

Herbert Hoover cast aside the mantle of the pitiless profit-seeking, opportunist engineer and had himself rebranded as a humanitarian saviour just as the first wave of war refugees spilled into London in August 1914.