Document:Commission for the Relief of Belgium 1 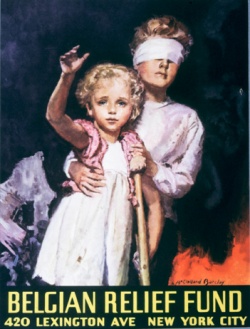 Documents in this series: World War I could and should have ended in 1915; but an end to the war before both Germany and Russia had been effectively destroyed as potential threats to the British Empire, was not acceptable to the British Deep State. The eleborate charade of organising relief for an allegedly starving Belgium had the real and calculated objective of diverting sufficient food and raw materials to the German military to enable it to continue fighting. The scam made vast fortunes for the war profiteers and cost the lives of maybe 10 million more allied and German military than otherwise might have been the case.

Herbert Hoover pictured masterfully against an image of 'Belgian Relief'

Over the course of the next two months we will examine the organisation loosely termed Belgian Relief which was created in late 1914, supposedly to save the ‘starving’ Belgian population left destitute after the German invasion in August. What we have uncovered is shocking evidence of Secret Elite collusion, both from London and America, to use Belgium as a means of supplying food to Germany and her armies so that they could continue fighting a bitter war of attrition on the continent of Europe. In a series of earlier blogs [1] we demonstrated how these men deliberately prolonged the war by a sham naval blockade which allowed Germany to maintain imports of vital food and war materiel. The Secret Elite sought the utter destruction of Germany and the German economy which threatened British predominance. This could not be achieved by a quick military victory, and it would have to be a long, long war. Armies march on their stomachs and good food supply lines have always been an essential factor in military success. Britain was able to sustain a long war by importing plentiful supplies from across her vast empire and from both North and South America. Germany, on the other hand, was surrounded by the proverbial ‘ring of steel’ and had no comparable sources. The stunning paradox is that Britain, in accord with her allies in ‘neutral’ America, knowingly supplied Germany with the means to go on fighting. 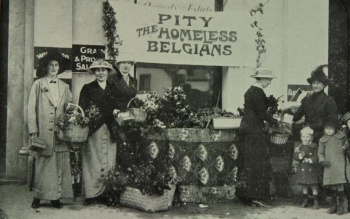 Warning: Any narrative about the Commission for the Relief of Belgium based on official documents, such as journals or diaries written by members of the Commission or their friends, must be treated as suspect. [2] In classic Secret Elite mode, the central characters involved in one of the world’s greatest swindles wrote their own version of history and removed or destroyed all contrary evidence. It may seem unbelievable but the real story of Belgian Relief has never been taught in schools or universities in Belgium. We were stunned to discover at a Conference in Brussels on 6 November 2014, (‘Expériences et représentations de la pénurie alimentaire durant la Guerre 14-18. Allemagne-Belgique’, chaired by Professor Laurence Van Ypersele) that the subject of Belgian Relief is still not covered in Belgium colleges today. Generations of Belgians remain ignorant of the machinations of the bankers and financiers, politicians and governments (and here we include the Belgian, British and American  governments) and ordinary citizens too, who abused what purported to be a charitable venture in order to prolong the war and make obscene profits. If the Commission for Relief of Belgium was so vital to the nations’s survival, why is it not be celebrated annually and given pride of place in Belgium’s history? 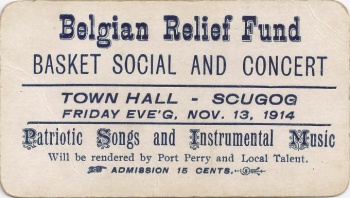 As the Belgian academics, Michael Amara and Hubert Roland  made clear ‘To this day a dark shadow hangs over the history of Belgian Relief. For many, the story of food provision has been raised to a myth created after the war.’ [3] What is this dark shadow? What is this myth? Why does a sense of embarrassment hang over the work of ‘American Relief’ as it became known? The Musee Royal de L’Armee et d’Histoire Militaire in Brussels put together a special centenary exhibition in 2014 about the city during the First World War. It featured an ‘American Relief’ shop with crates of Columbia River salmon, fancy apricots from San Francisco and other relatively exotic produce. The background narrative to the exhibition is bland and makes no effort to explain the central purpose of an organisation which helped supply the German army. Is this yet another example of the deliberate glossing over of unpalatable history or a reflection of how deeply the falsehood has become embedded in Belgium? Even so, the exhibition merits a visit if you happen to be in  Brussels. [4]

And little wonder that the facts of the story remain so sketchy. All of the pertinent primary evidence about the workings of this group was removed from Europe after the war on the instruction of its director, Herbert Hoover, and taken to America. What Hoover could not control, like adverse reports in newspapers, official court judgements or published company returns, he tried to suppress. Additionally, as we will show in great detail in a future blog, those who dared make claims about the illegal nature of his dealings were quashed, threatened or otherwise marginalised. 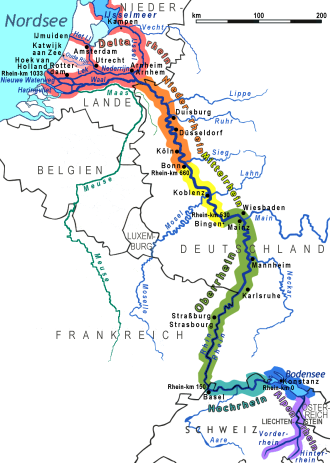 Map of River Rhine, showing how important its strategic position was for Germany

The Commission for Relief in Belgium (CRB) between 1914-1917 was an organisation that hailed itself as ‘the greatest humanitarian undertaking that the world had ever seen’. [5] Indeed by the time the Commission closed its doors and rendered what passed as public accounts in 1920, [6] it claimed to have spent over $13,000,000,000 on relief for the people of Belgium. (In current monetary values that would be approximately $154,000,000,000) [7] According to one official history, ‘A chapter was written in the history of the Great War that will be read with the deepest interest for hundreds of years to come.’ [8] It will not. Not if those who control history continue to have their way. The story has already been buried deep and virtually ignored in official Belgian history. Indeed, few histories of the First World War even make mention of the CRB and it has slipped inexplicably under the radar of most academic historians. Additionally, the war memoirs of Lloyd George (Prime Minister 1916-1922, ) and Sir Edward Grey (Foreign Secretary 1906-1916), [9] two of the main British Cabinet members with whom this organisation had direct contact, failed to even mention Belgian Relief. Likewise, there is no reference to this ‘humanitarian’ work in the otherwise verbose letters from Herbert Asquith (Prime Minister 1908-1916) to his secret love, Venetia Stanley. [10] It is as if they were trying to say ‘it had nothing to do with us’. It most certainly did.

The following series of blogs will closely examine the constituent parts of this ‘humanitarian’ venture to unearth how and why it was organised, what it ultimately achieved, who benefitted, and how those involved perpetrated an enormous fraud. Belgian Relief was reputedly organised to feed the poor and needy in Belgium and Northern France. That merely provided the cover for everything that lay behind the scam. Through it, the Secret Elite deliberately supplied the German army with much needed foodstuffs, without which the Germans could not have continued to fight. The food sent in to Belgium by the relief organisation enabled much of the food actually produced there to be directed to Germany. Little known, but strongly denied, the men directly involved, especially the bankers, made fortunes from it. The humanitarian aspect was a vital and effective cover for a clandestine organisation that benefitted the ‘money-power’ and quite deliberately prolonged the war.

A number of key individuals were central to the creation, continuation and promotion of the two main agencies which supplied food to Belgium during the German occupation. Namely:

Both were linked by profession, business or diplomatic status. A combination of American, German and Belgian bankers, businessmen and diplomats, approved and advised by the Secret Elite in London and Washington, were entrusted with the responsibility of managing what in normal circumstances of war would be termed, ‘feeding the enemy’. Under the guise of saving the starving populations in Belgium and Northern (occupied) France, this became a bold, well planned organisation which involved a prodigious campaign of propaganda supported by national governments. Ultimately, Belgian Relief was accountable to no-one. 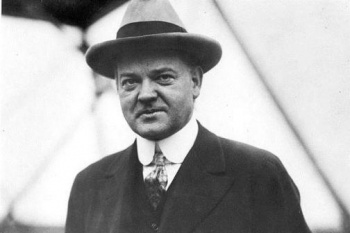 It spent hundreds of millions of dollars in procuring food and other war supplies, largely, but not exclusively, in America and Argentina. The organisations shipped millions of tons of produce through the neutral port of Rotterdam to the mouth of the Rhine where it was supposed to be handed to the Belgian Comite National for local distribution. Rotterdam is the gateway to Germany, not Belgium; a glance of any map of Europe will confirm this. By agreement of both neutrals and belligerents, the sole port of entry for all the food and materials sent to Belgium was literally sited at the head of Germany’s arterial river. All exits from Rotterdam and Holland passed through Germany or German occupied territory. Dutch neutrality guaranteed nothing. The whole of the Belgian Relief programme depended on German willingness to countenance these imports. They did. It is our belief that behind this veneer of international humanitarianism, a cruel confidence trick was played out on the world stage.

Between 1914-1918, hundreds of thousands of hungry and sometimes desperate Belgian and French communities were supported by 4,500 local committees comprising workers’  groups, Catholic and Protestant benevolent societies and other local agencies in ten Belgian provinces and six French districts. These good people worked tirelessly to save their fellow countrymen from hunger. Of that there is ample evidence. [11] Many desperate and needy Belgian mothers, children and families in poverty were indeed supported through the barren war years by the relief organisations, but they provided a front, a public focus, behind which Germany was enabled to sustain and prolong its war effort so that it dragged on and on well beyond 1915 when it could have been ended. Some of the Belgian Relief’ food went directly to the German army on the Western Front, and it enabled home-grown Belgian produce to be sent across Europe to German cities and towns. Not by chance, but by design; not in a haphazard occasional manner, but methodically, with clear channels of communication that provided ongoing regular supplies.

This Secret Elite inspired solution to Germany’s critical food problem was an affront to the concept of humanitarianism. It required a trusted and ruthless manager with a proven track record of greed and loyalty to the British Establishment. He had to appear to act independently yet have access to political and financial power in Britain, Europe and America. He required the services of international banks to handle vast sums of money and had to have connections with world-wide shipping companies to facilitate very complex transportation logistics. He needed to be a neutral citizen, to understand the power of positive propaganda, and have access to newspapers on both sides of the Atlantic. One candidate with proven experience, who could be trusted not to flinch in the face of a moral dilemma, was known to and favoured by the Secret Elite. His name was Herbert Clark Hoover. He would go on to become the 31st President of the United States.