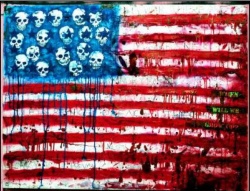 Author's Note The world is changing. Formerly, there was a capitalist right and a socialist left. Today, the world is dominated by the United States and the first question that arises is whether to serve or to resist them. As in World War II, we find all ideologies in each camp. For now, Washington coordinates the alliance between the Nazis and jihadists in Europe with the blessing of the anti-Putin Russians. 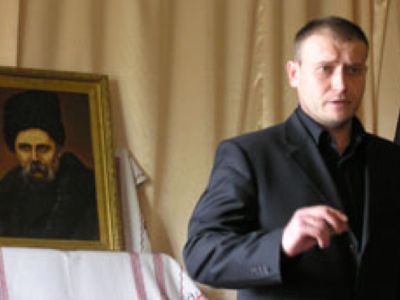 Dmytro Yarosh [1] at the Ternopol meeting
May 8, 2007 in Ternopol (Western Ukraine), Nazi and Islamist factions create a so-called anti- imperialist front to fight against Russia. Organizations from Lithuania, Poland, Ukraine and Russia participate, including Islamist Crimean separatists from Adygea, Dagestan, Ingushetia, Kabardino-Balkaria, from Karachay-Cherkessia, Ossetia, and from Chechnya. Not able to get there because of international sanctions, Dokka Umarov had his contribution read. The Front is chaired by Dmytro Yarosh, who became, at the time of the coup in Kiev, February 2014, Deputy Secretary of National Security Council of Ukraine.

The confrontation between the Kiev putschists, backed by NATO and Ukrainian federalists, supported by Russia, has reached a point of no return. On May 2, President Olexander Turchinov and Israeli oligarch Ihor Kolomoisky organized a massacre at the House of Unions in Odessa. The Western press at first minimized the scale of the atrocities and then went mute when the testimony and evidence was accumulated [2] [3]. After these horrors, it is no longer possible for two peoples to continue to live together.

Three scenarios are possible: either the United States will make Ukraine a new Yugoslavia and cause a war in the hope Russia and the European Union will be bogged down; or else they will multiply confrontations around Russia, starting with Georgia; or else they will grow non-state combatants to destabilize Russia itself, Crimea or Dagestan.

Whatever option is chosen, Washington has, as of now, a mercenary army in place. The Defence Council of Kiev sent envoys to Western Europe to hire far-right activists to come and fight against the Federalists (called "pro-Russian"). And a Pravy Sektor France cell, whose members will soon be integrated into the Ukrainian National Guard, has already been created.

In addition, the Kiev Defense Council intends "to grow numbers" to add jihadists who already have real military experience to these Western European neo-Nazis.

In fact, if we are willing to ignore the symbolic bric-a-brac on each side, Nazis and jihadists today have in common both the cult of violence and the Zionist dream of world domination. They are compatible with all other organizations supported by Washington, including Sergei Udaltsov’s Left Front and his friend, Russian anti-Putin leader, Alexei Navalny. There are already numerous contacts between them.

Rather than applying the right/left division of the Cold War, the only relevant cleavage line today is imperialism/resistance. In Ukraine, Kiev folks refer to the fight of the Wehrmacht against Jews, Communists and Russians, while those in Donetsk celebrate the victory of the fatherland against fascism during the "Great Patriotic War" (World War II). People of Kiev define their identity by their history, real or mythical, while those of Donetsk are emerging as people from different historical communities but united in their fight against oppression.

Proof that this dividing line is the only relevant one, it is that the Jewish oligarch, Ihor Kolomoisky, is financing those chanting "Death to the Jews!". This is a mobster who has amassed one of the largest fortunes in Europe, seizing at gunpoint large metallurgy, finance and energy enterprises. He is supported by the United States and has placed various personalities including U.S. Vice President Biden’s son, on the Board of Directors of his gas holding. [4] Not only does he have no problem financing Nazi groups, he was jubilant when, following his orders, they murdered anti -Zionist Jews in Odessa.

Collaboration between Nazis and jihadists is not new. It finds its origin in three Muslim divisions of the Waffen SS. The 13th division "Handschar" was formed of Bosnians, the 21st " Skanderbeg " Kosovars and the 23rd " Kama " Croats. All were therefore Muslims practicing Islam influenced by Turkey. Indeed, the majority of these fighters defected during the war against the Red Army.

More recently, Takfirists and Nazis fought together again against the Russians during the creation of the Islamic Emirate of Ichkeria (Second Chechen War, 1999-2000).

On May 8, 2007, in Ternopol (western Ukraine), Baltic, Polish, Ukrainian and Russian Nazis and Ukrainian and Russian jihadists created a so-called "anti-imperialist front" with the support of the CIA. This organization is headed by Dmytro Yarosh, who, during the Kiev coup in February 2014, became Deputy Secretary of the National Security Council of Ukraine, then Pravy Sektor candidate in the presidential election of May 25th.

In July 2013, the Emir of Caucasus and local leader of Al Qaeda, Doku Umarov, called on members of the "anti-imperialist front" to go and fight in Syria. However, there is no clear documentation of the Nazi participation in current operations to destabilize the Levant.

Finally, a few dozen Crimean Tatar jihadists came to fight in Syria, and were transported by the Turkish MIT to Kiev to participate in EuroMaidan events and the coup of February 22nd alongside Dmytro Yarosh [5].

The measures taken in Europe, at the request of the U.S. Secretary for Homeland Security, Jeh Johnson, to prevent the return of jihadists at home shows that the CIA intends to use them on a new front. [6] The forced April 15th resignation of Prince Bandar bin Sultan, at the request of Secretary of State John Kerry [7] and that of his brother, Prince Sultan bin Salman, May 14 on pressure from Secretary of Defense, Chuck Hagel [8], attests to the US will to recast the jihadist machine.

Will European and Arab Resistors ally themselves too?