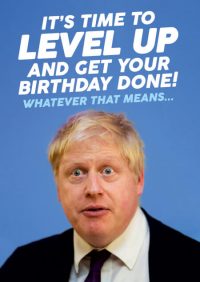 Johnson is a tasteless joke & man of clichés

These are not the words of an enemy, but Conservative supporter and former Daily Telegraph editor Max Hastings.

When Boris Johnson was preparing to seize the crown from Theresa May and redecorate Downing Street, Hastings wrote:

"The Tory party is about to foist a tasteless joke upon the British people. … while he is a brilliant entertainer … he is unfit for national office."

Writing in The Guardian, rather than the Torygraph (24/06/2019), Hastings continues:

"As it is, the Johnson premiership could survive for three or four years, shambling from one embarrassment and debacle to another, of which Brexit may prove the least."[1]

Max Hastings employed Boris Johnson as the Brussels correspondent for the Daily Telegraph covering the EU. Johnson wrote streams of fake news. The newspaper was required to make so many apologies, Hastings fired him.

Johnson then made a career move into politics where hyperbole, false promises and exaggeration are the stock in trade. He was an instant success.

The problem with someone who sometimes lies and sometimes tells the truth is you never know what is coming out of their mouth at any given time. Lying has a corrupting influence on those around them. Ministers asked if Johnson broke this rule or that rule are obliged to lie, hedge and prevaricate, deepening the distrust and undermining democracy itself.

It is hard to know with Johnson whether he believes his own lies. When caught in flagrante, he spins out a fresh lie to cover the original lie, weaving spider-like a web from his repertoire of white lies, black lies, little fibs, whopping great big fibs, fake truths, alternative truths and half-truths.

Like a good tennis player, Johnson’s reactions are fast and spontaneous. He says whatever comes into his head. He is not interested in whether it is true or not true. He just wants to get the ball back over the net.

The big lie (große Lüge in German) was the propaganda technique adopted by Adolf Hitler when he wrote "Mein Kampf" in 1925. He had discovered that if the big lie was truly colossal, ‘no one would believe that someone could have the impudence to distort the truth so infamously.’

Which recalls the false promise of £350 million a week being gifted to the NHS after Brexit sprayed across the side of the bus under which Allegra Stratton was thrown, a sacrifice for the Christmas party that never was but might have been. The truth, of course, is that the Conservative Party continued after Brexit to suck out money from the NHS and place it with the private sector.[2] The hand-clapping outside No 10 was surely the most unprincipled and insincere act of the entire pandemic.

Johnson has been astute with the people he has gathered about him in the Cabinet.

Grant Shapps (Transport) lied about the multi-million-pound internet company he ran under the pseudonym Michael Green (Guardian 15/03/2015); Dominic Raab (deputy PM) was rebuked by the European Commission for spreading ‘pure disinformation’ in a campaign video; Priti Patel (Home Office) has lied consistently about bullying; Jacob Rees-Mogg falsely claimed Britain could only approve the Covid vaccine quickly because the country had left the EU.

Then there is Michael Gove (the Levelling Up Minister). He condemned Johnson as unfit for national office in 2016, then joined his Cabinet in 2019.

"By his every act, as one of the leading architects of Brexit, he gives us good cause for us to mistrust him," wrote Nick Cohen (Guardian 23/11/2019). "In his deceit and cynicism, Michael Gove is the embodiment of the age."[3]

Our elected leaders are liars and cheats. They are greedy and self-serving. They will never Level Up. They will continue to leech money from the NHS, underfund schools and keep hungry people queuing up outside food banks.

One in five people (20%) in the United Kingdom live in poverty: 8 million working-age adults, 4 million children and 1.9 million pensioners. The figures are from the government’s own figures published in the House of Commons Library.[4]