Document:15 times when Jeremy Corbyn was on the right side of history 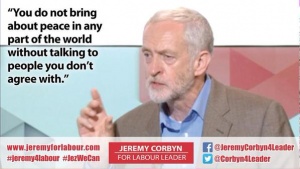 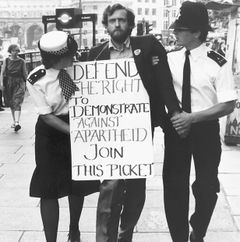 Arrested for protesting outside the South African embassy in 1984

1. Apartheid: Jeremy Corbyn was a staunch opponent of the Apartheid regime and a supporter of Nelson Mandela and the ANC. He was even arrested for protesting outside the South African embassy in 1984.

2. Chile: Jeremy was an opponent of the brutal dictator Pinochet (an ally of the British government under Thatcher) and was a leading campaigner in the quest to bring him to justice. In 1998 Pinochet was arrested in London.

3. LGBT rights: As noted in Pink News, Jeremy was an early champion of LGBT rights. At a time when the Tories decried supporting LGBT rights as ‘loony left’, Jeremy voted against section 28 which sought to demonise same-sex relationships.

4. The Miners’ Strike: Jeremy went against the Labour leadership and fully supported the miners in their effort to prevent the total destruction of their industry and communities. Cabinet papers released last year prove that the NUM were correct to claim that there was a secret hit list of 75 pits which the government were determined to close within 3 years. Ex-mining areas still suffer from the devastating effects of de-industrialisation, particularly high unemployment.

5. Iraq: In the 1970s and 1980s, while the UK and other Western government were selling weapons to their ally Saddam Hussein, Jeremy campaigned and demonstrated against it, as well as protesting against the mass killings of Iraqi Kurds by Saddam’s regime.

6. Birmingham Six and Guildford Four: Jeremy was involved in the campaigns in support of the victims of these appalling miscarriages of justice. The wrongful convictions were eventually quashed.

7. Talking to Sinn Fein: In the 1980s, along with Tony Benn and other Labour MPs, Jeremy drew intense criticism for engaging in dialogue with Sinn Fein and inviting its representatives to the House of Commons. The government claimed it ‘would not talk to terrorists’ but we now know that by 1989, it was secretly engaged in talks. Sinn Fein has been a major party of the Northern Ireland government since 1998 and even the Queen and Prince Charles have now met with its leading figures.

8. Tuition fees: Jeremy opposed New Labour’s introduction of university tuition fees, which explicitly broke Labour’s 1997 election manifesto pledge, as well as all of the subsequent increases. Fees were then trebled under New Labour before being trebled again by the coalition government, leaving the average student in £53k of debt.

9. Private Finance Initiative (PFI): Jeremy argued against this method of funding the building of new schools and hospitals, which was used partly because New Labour had committed itself to Tory spending plans. Instead of financing projects through government borrowing, private finance would build the infrastructure and then lease to the government. PFI deals cost the taxpayer £10bn a year and we will end up paying more than £300bn for assets worth just £54.7 billion.

10. Afghanistan: Going against the tide of political and public opinion in the wake of the 9/11 attacks, Jeremy opposed the invasion and occupation of Afghanistan in 2001. By 2009, most polls showed a majority of British people were against the war and Britain eventually withdrew its troops in October 2014.

11. Iraq, again: Jeremy saw through the ‘dodgy dossier’, the claims of weapons of mass destruction and campaigned and voted against the Iraq war in 2003. In doing so, he helped to organise the biggest demonstration in British history and remains a leading figure in the Stop the War Coalition.

12. Palestine: Jeremy has been a long-standing campaigner for the rights of the Palestinian people, beginning his advocacy at a time when Western public opinion was largely hostile to the Palestinian cause. Last year parliament overwhelmingly voted to recognise Palestine.

13. Public ownership of the railways: Jeremy has always advocated public ownership of our railways. The argument that privatisation would result in competition and thus lower fares has been proved to be entirely incorrect. Instead not only have fares rocketed year on year but the British taxpayer now subsidies the railways to the tune of £4bn a year, around four times the cost of the previous, publicly owned system.

14. Trident: Jeremy has been a long-term campaigner in CND, and has always opposed Britain having nuclear weapons – a difficult argument to make at the height of the Cold War. But now virtually all the polling evidence shows that a majority of people are against spending £100bn on a new generation of Trident nuclear weapons.

15. Austerity: Right from the beginning Jeremy argued and campaigned against austerity. Despite inheriting a situation where the economy was growing, Osborne’s austerity budgets plunged the UK into a double dip recession in April 2012 and by February 2013 Britain lost its AAA credit rating for the first time since the late 1970s. Five years of austerity later and the UK’s debt has actually risen from £1 trillion in 2010 to around £1.5 trillion today. The social cost has been shocking, leading to a rise in child poverty, an unprecedented fall in real wages and nearly 1 million people now reliant on food banks to name but a few of the dire consequences.